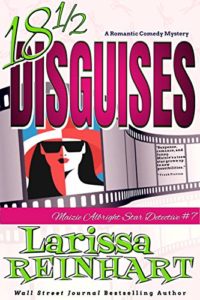 AN OLD FRIEND MURDERED AND A NEW FRIEND IN JEOPARDY

“A mixture of adventure, mystery, and romcom. So like Hollywood, you'll never figure out what is real and what is make-believe until you reach the end.” — Laura’s Interests

#DisguisedDetectiving Maizie Albright might have once played a (teenage) private investigator on TV, but she’s now living the (adult) part. Her (mother’s) name is on her business cards. Her (boss’s) appointment book is brimming with new clients. And her bank account has grown large enough to finally trade in her dirt bike for an actual new (pre-owned) vehicle.

And then there’s Wyatt Nash. Love of her life. Future father of her…

And then there’s Wyatt Nash. Future partner in her business. Not now. Later. Right now, they’re waiting for Maizie to get her PI license and for Nash to get out of the red so they can get on with…

Just what, Maizie isn’t so sure. But she is sure about one thing. She’s ready to take on her own cases. To prove she’s more than just a (washed-up actress) assistant private eye.

When Maizie finds her costume designer friend killed during a masquerade gala, it’s the opportunity Maizie hoped she’d never get. An investigation into an old friend’s murder. But one that’s also put her new friend in jeopardy.

While the police begin their inquiries, Maizie starts her own case. She’s needling Black Pine’s wealthy do-gooders, threading through lies, stitching together clues, and ripping out false leads. Her investigation may cost Maizie her job, her relationships, and her life. But by unspooling the truth, Maizie’s darned if they stop her from catching a killer who’s sew evil, it’s shear madness.

Although this isn’t a culinary cozy mystery, the Maizie Albright Star Detective series is set in Georgia and gives me an excuse to write about my favorite Southern foods. My ex-actress turned private investigator loves to eat, particularly now that she’s off-screen and doesn’t have to worry as much about her weight.

In 18 1/2 Disguises, one of the foods I describe her and a police detective eating is Debris Po’ Boys. This is a Cajun-style roast beef sandwich and I think, super delicious. I’ve had all kinds of po’ boys, but this is my favorite. It also fits with the season for the setting of 18 1/2 Disguises, in February, around Mardi Gras.

Now y’all, 18 1/2 Disguises doesn’t take place in New Orleans and isn’t about Mardi Gras. The Maizie Albright series is set at a lake and mountain resort town, Black Pine, in the North Georgia Mountains. But it begins with a masquerade in celebration of Mardi Gras as a gala for the kickoff event for a charity.

I wanted a masquerade because the victim of 18 1/2 Disguises is a costume designer. Mardi Gras seemed the perfect excuse! It also gave me the excuse to later describe this Po’ Boy eaten in the truck of the police detective in front of the victim’s house before he and Maizie do a walk-through.

Here’s a sneak peek at the scene.

“Do you mind if we eat first?” Ian opened his truck door, reaching for two Styrofoam boxes. He glanced over his shoulder. “I thought we could tailgate. But we can sit it in the cab if you want.”

I sniffed, trying to snatch a whiff of whatever was in the boxes. Then caught myself. What was more appropriate for a crime scene non-date? The bed or cab of a truck? This wasn’t covered in my etiquette classes.

“That’s what I like about you, Maizie. You’re not too cool for school.”

“Guys like Nash get on me about my love of food. I can’t help it if investigations make me hungry. I’m not pretending otherwise to make myself look tough.” He winked. “I got us some po’ boys. Roast beef debris is good warm or cold. Although hush puppies are better hot.”

My stomach rumbled. Stay strong, Maizie. Stay in character. “That sounds…” I tried to formulate my mashup PI’s response and weakened. I couldn’t stay in character with po’ boys and hush puppies before me. Some temptations were too powerful. “…totally awesome.”

“Tea?” He handed me a large, lidded cup, then reached for a paper bag spattered with grease spots. “Hushpuppy?”

I took the tea and a hushpuppy, chewing fast. Then slowed to savor the hot crunchy bites. Sweet and savory. Like a donut meant for dinner. “I haven’t had a po’ boy since my last trip to New Orleans.”

“To be honest, looking into this Kyler Blick got me thinking about Cajun food.” He laughed. “Don’t tell the guys, they’ll think I’m demented.”

Writing that scene made me hungry (this is a problem I often have) and I found a recipe for Debris that my family loved. I use my slow-cooker a lot (you’ll see that if you follow me on Instagram @larissareinhart) because I have busy teenagers. This slow-cooker version is perfect for po’ boy sandwiches!


1. Spray the inside of your 4-6 quart slow cooker with cooking spray. Add the roast.
2. In a small bowl, whisk together the au jus mix, gravy mix, and 1 cup of water. Pour it over the roast. Cover and cook on low for 8-10 hours.
3. When the beef is tender, remove the roast from the cooker and shred the meat. Discard the fat and return the shredded meat to the gravy in the cooker. Mix to combine.
4. Preheat the over to 400ºF. Warm the bread in the oven for 3 to 5 minutes to crisp up the exterior.
5. Spread mayo and mustard on the bread. Add a generous amount of shredded beef and gravy and top with shredded cabbage and pickles.

Thanks so much!
Larissa

Visit Larissa’s website to join her VIP Readers email group and get the free prequel to The Cupid Caper plus other exclusive bonus content! www.larissareinhart.com

Larissa, her family, and Cairn Terrier, Biscuit, lived in Nagoya, Japan, but have returned to Peachtree City, Georgia. You can see them on HGTV’s House Hunters International “Living for the Weekend in Nagoya” episode. Larissa loves books, food, and traveling with her family. You can often see her adventures on Instagram (and her little dog, too).

The Cherry Tucker Mystery Series in reading order:
A CHRISTMAS QUICK SKETCH (prequel novella)
PORTRAIT OF A DEAD GUY
STILL LIFE IN BRUNSWICK STEW
HIJACK IN ABSTRACT
THE VIGILANTE VIGNETTE (Halloween novella)
DEATH IN PERSPECTIVE
THE BODY IN THE LANDSCAPE
A VIEW TO A CHILL
A COMPOSITION IN MURDER
A MOTHERLODE OF TROUBLE (in YEAR-LONG TROUBLE anthology)