All ten-year-old Alexandra Atwood wants for Christmas is to get her dad and the B&B’s cook Marquetta under the mistletoe. After all, how can they get married if they don’t kiss first?

When murder strikes in Seaside Cove, bed-and-breakfast owner Rick Atwood is asked to help find the killer. But this will not be an easy case to crack. …

END_OF_DOCUMENT_TOKEN_TO_BE_REPLACED 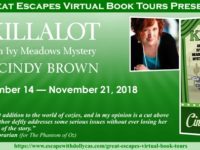 A jouster, a playwright, and a detective walk into a faire…but it’s no joke when one ends up dead.

Actress and part-time PI Ivy Meadows is thrilled when she learns that the famous playwright behind Hello Dolly Madison is in Arizona. Not so much when she realizes he’s a suspect in the murder of a Renaissance faire jouster.

As is her friend Riley. And about a thousand other people, all disguised in Renaissance costume during the fatal jousting match.

When Ivy is hired to investigate the killing, she goes undercover as a Cockney belly dancer at the faire and finagles her way into the playwright’s Kennedy-inspired version of Camelot—as Marilyn …