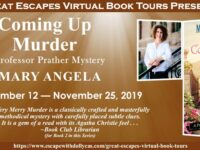 Everything’s coming up roses for Professor Emmeline Prather. Her scholarly book is finished, spring term is coming to a close, and her love life is blossoming. Then the festival surrounding the exhibit of Shakespeare’s First Folio opens, bringing with it a tempest more dramatic than the bard’s.

In his panel presentation, actor and grad student Tanner Sparks contends Shakespeare isn’t Shakespeare, boasting that he can prove the long-debated theory that an aristocrat actually penned the sonnets and plays. His bombshell sets off an acrid debate among scholars. But were they upset enough to kill him? That’s what Em wonders when Tanner is found dead in …

END_OF_DOCUMENT_TOKEN_TO_BE_REPLACED

One father was murdered, and another convicted of his death. All because their children fell in love.

Nate Beckett has spent his life fighting wildfires instead of the lies and rumors that drove him from his Colorado home town. His mother begs him to come to Carlisle now that his father has been released from prison, but it isn’t until he’s sidelined by an injury that he’s forced to return and face his past. But that means facing Brenna too.

Fourteen years ago, Nate was in love with the preacher’s daughter. When Pastor Strickland discovered Brenna had defied him to sneak out with Nate, the fight between Strickland and Nate’s drunken dad …