1. I was raised in a home with no television and no refrigerator.

We did have complete (if outdated) sets of Encyclopedia Britannica and Encyclopedia Americana that helped pass the time on rainy days and in the evening after it got too dark to play outside. My aunt – who raised me from the age of five — bought fresh food every day during the summer. In the winter, our entire terrace became a freezer. I don’t remember a single instance when our food spoiled or when I couldn’t find something to keep me entertained.

2. I was a remarkably dumb kid.

I thought grownups stirred coffee because they liked the sound of spoonsclicking on porcellain. It didn’t occur to me that they were trying to dissolve the sugar. When my aunt told me that a blinking light on a car meant it was about to make a turn, I didn’t believe her. I thought the blinking lights were just there to make the cars look pretty, like the lights on a Christmas tree. Once, I overheard some grownups talking about a kid who had choked on an olive pit and had to be rushed to the hospital by ambulance. After that, every time I heard the siren of an ambulance I figured someone must be choking on an olive. Even now, when I hear an ambulance approach the hospital where I work, the first thought that pops in my mind is, “olive”.

I left the city of Trieste, Italy, where I had lived since the age of 5 to join my older brothers in San Diego. I was to fly in by myself. They were to pick me up at the airport in California. The flight from Trieste to Rome went smoothly but my connecting flight from Rome to New York got cancelled due to mechanical problems. The passengers were offered the choice of spending the night in Rome or to take a flight to Geneva where we could get a connecting flight to New York. I opted for the latter choice, but by the time I arrived in New York, my flight to San Diego had already departed, so the airline set me up for the night in a hotel near JKF.

It didn’t occur to me to call my family to tell them what had happened. I mean, no big deal, they would find out the next day. Turns out my sister panicked when I didn’t show up and made a bunch of frantic phone calls to the airline to try to find me. No one could tell here where I was. Next day, no one was at the airport to greet me, so I took a cab to my brother’s house. He didn’t seem too worried.

4. I became a pediatrician by default.

Up until the end of my third year of medical school, I planned to pursue a career in Psychiatry. I had a scholarship with the National Health Service Corps which paid my tuition and gave me a modest stipend. In return, I had committed to a three year service commitment in a primary care field. Fortunately, Psychiatry was on their accepted list of primary care choices. Less than one year from my graduation date, I received a letter stating that Psychiatry was no longer an accepted primary care choice in the eyes of the NHSC.

Suddenly the career I had envisioned for myself since my junior year of high school was no longer an option. I sulked for about a week, then signed up for every possible pediatric elective I could schedule in my last year of medical school and never looked back.

5. My first job our of residency was at an inner-city clinic on the South Side of Chicago.

I was there to pay back my service obligation with the National Health Service Corps. The clinic I worked in was a boxy rust-colored building with bullet ridden windows on a busy intersection of a blighted neighborhood known as New City. I witnessed three drive-by shootings during my service time, which really only turns out to one a year.

Two things I learned working on the South Side: inner city grandmothers are the most socially conservative group in America and teenage gang-bangers are remarkably cordial after you’ve treated them for venereal diseases a couple of times.

6. My grandfather fought alongside Ernest Hemingway in World War I.

They were both in the far northeastern corner of Italy fighting the Austrians, Hemingway, as an ambulance driver, my grandfather, in a cavalry division entrusted with resupplying the front lines. Just how close they really were and if they met at all is anyone’s guess.

When I ask my now 97-year old aunt about it, she swears they knew each other well and that her father told her that Hemingway was a swell guy. The problem is that Hemingway wasn’t famous at all at that time. So why would my grandfather remember even remember him? I’m guessing the whole story is a false memory.

Nonetheless, each time I read A Farewell to Arms (one of my favorite novels), I can’t help but wonder which one of the characters might have been inspired by my “nonno”. After all, my aunt was right about the turn signals on cars.

7. My grandmother was the illegitimate child of a young man with a noble title.

Swaddled up in a tight bundle, she was deposited as an infant on the foundling wheel of the orphanage of the small town she was born in. If you’re not familiar with foundling wheels, they were a type of hatch on the outside wall of orphanages that allowed parents to anonymouslyleave babies they couldn’t care for. Kind of like the night depository drawer at a bank. They were common all over Europe in Medieval times, and were still used in parts of Italy until the early twentieth century.

It turns out my grandmother’s parents were a young unmarried couple, the father a law student of “noble heritage”, which might just have meant that his family was wealthier than most others, and almost certainly implied that they owned land. My grandmother was happily adopted but did meet her biological parents. In fact she took on her biological father’s surname, and kept it even after she got married – an act that was unheard of in Italy at that time. Which kind of makes you think. The surname was Palmieri; the same name I adopted as I was about to graduate from college. But that’s another story.

Peter Palmieri was raised in the eclectic port city of Trieste, Italy. He returned to the United States at the age of 14 with just a suitcase and an acoustic guitar. After attending public high school in San Diego, California, he earned his bachelor’s degree in Psychology and Animal Physiology from the University of California, San Diego. He received his medical degree from Loyola University Stritch School of Medicine and completed his pediatric training at the University of Chicago and Loyola University Medical Center. More recently, he was awarded a Healthcare MBA by The George Washington University. A former student of Robert McKee’s Story seminar and the SMU Writer’s Path program, and a two-time attendee of the SEAK Medical Fiction seminar taught by Tess Gerritsen and Michael Palmer, Peter is now busy practicing general pediatrics at a large academic medical center while working on his next medical suspense. 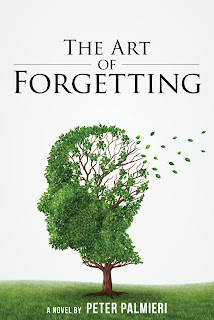 Dr. Lloyd Copeland is a young neurologist who is tormented by the conviction that he has inherited the severe, early-onset dementia that has plagued his family for generations – the very disease which spurred his father to take his own life when Lloyd was just a child. Withdrawn to a life of emotional detachment, he looks for solace in hollow sexual trysts as a way to escape his throbbing loneliness. Still, he clings to the hope that the highly controversial treatment for memory loss he’s been researching will free him from his family’s curse.

But when odd mishaps take place in his laboratory, his research is blocked by a hospital review board headed by Erin Kennedy: a beautiful medical ethicist with a link to his troubled childhood. The fight to salvage his reputation and recover the hope for his own cure brings him face to face with sordid secrets that rock his very self-identity. And to make matters worse, he finds himself falling irretrievably in love with the very woman who seems intent on thwarting his efforts.
Praise for The Art of Forgetting:

“The Art of Forgetting is unforgettable!” Apollonia D., Amazon Reviewer