by Mary Ellen Hughes
Also by this author: A Fatal Collection, A Vintage Death 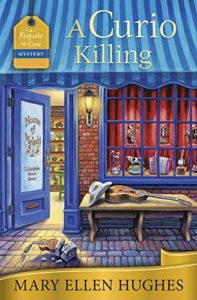 Callie Reed is looking forward to her first Keepsake Cove spring festival. But her excitement dims considerably when she learns that her ex-boyfriend, Hank, will be performing with one of the hired country-western bands. Callie vows to keep her distance, but that changes when the band’s manager, Bobby Linville, is found dead, killed with the music box Hank bought at Callie’s shop.

Hank is soon singing a sad tune in a detention center with Callie his only lifeline. Though thoroughly aware of his many faults, she knows violence and murder aren’t in his blood. But that means one of her fellow Keepsake Cove residents must be hiding a dark secret—something Callie desperately needs to uncover.

Hello, I’m Mary Ellen Hughes and I’m delighted to have be here.

I’m also happy to say that my latest book, A CURIO KILLING, the third in the Keepsake Cove series, has just been released. I’ve really enjoyed writing this series for several reasons, but one of them is the setting—Maryland’s Eastern Shore. Separated from the rest of Maryland by the Chesapeake Bay, the Eastern Shore is a lovely and peaceful part of the state, with loads of farmland and great fishing on its miles of coastline. I thought it was the perfect spot for my town-within-a-town, Keepsake Cove.

I put Keepsake Cove on the route that many tourists take to the beaches of Ocean City. Tourists love to shop, and The Cove, as locals call it, is stocked with all kinds of collectible shops—vintage jewelry, unique salt and pepper shakers, and many more. My protagonists owns a collectible music box shop, House of Melody.

Callie Reed inherited her shop from her Aunt Melodie, who died under mysterious circumstancesearly in book #1, A FATAL COLLECTION. Though her inheritance was a complete surprise, it gave Callie the nudge she needed to break up with her country music boyfriend, Hank, and move to Keepsake Cove (where she eventually solves her aunt’s murder.)

Callie thought Hank had moved on, as she did, but he shows up in A CURIO KILLING for the Keepsake Cove Spring Festival as part of a new band. Callie intends to keep her distance, but when Hank is jailed for the murder of his band’s manager, he begs her for help. How can she refuse? She’s the only one he knows in the area, and the only one who knows him well enough to believe in his innocence.

The fact that Callie has a new boyfriend, Brian, is a complication, but Brian is an understanding kind of guy who supports Callie’s efforts, probably with hopes of sending Hank on his way as quickly as possible.

As I mentioned, I set the series on Maryland’s Eastern Shore, and in the process of writing I learned a lot of new things about the area, which, by the way, is always capitalized. One of those came through a research visit to the Harriet Tubman museum, where I learned about the amazing woman who guided many slaves to the north via the Underground Railroad. That bit of history made its way into book #2, A VINTAGE DEATH.

Just driving around the Eastern Shore at various times of the year put strong images into my head that I used to add texture to the story. And I got to know the people living there better, many of whose families had been there for generations, either fishing (watermen) or farming, and others who retired there to enjoy the peace. That gave me ideas for a variety of characters to add to the plot.

A CURIO KILLING will be the last of the Keepsake Cove series, since the publisher, Midnight Ink, is closing its mystery line. So, though I enjoyed writing it, my pen will be leaving the Eastern Shore. But it’ll be landing in a new series next year with Berkley Publishing. (A Wicked Yarn will be written under my new pen name, Emmie Caldwell, and should be out in the fall of 2020.)

Though I didn’t know A Curio Killing would be the last when I turned in the manuscript, I feel I’ve left my characters in a good place in their lives, where readers won’t need to worry about what might come next. Callie and Brian are, after all, on the Eastern Shore, surrounded by friends and all those lovely shops, and… there will be no more murders for them to deal with!

For that, you’ll have to move on to the next series, The Craft Fair Mysteries. I hope you’ll check my website http://www.maryellenhughes.com for upcoming news about that.

Until then, au revoir!

A Curio Killing by Mary Ellen Hughes is the third book in A Keepsake Cove Mystery series. This is one of my favorite series. I really love the uniqueness of the main character, Callie, running a music box shop. I have such a fun time when I visit Keepsake Cove. Callie is smart and makes an awesome sleuth. I really love the way Ms. Hughes writes. She keeps me turning the pages ~ sometimes even past my bedtime. 🙂 I’m so sad that this is the final book in the series…however, it was a wonderful mystery and I feel like I had closure after reading it.

Mary Ellen Hughes is the bestselling author of the Pickled and Preserved Mysteries (Penguin), the Craft Corner Mysteries, and the Maggie Olenski Mysteries, along with several short stories. A Fatal Collection is her debut with Midnight Ink. A Wisconsin native, she has lived most of her adult life in Maryland, where she’s set many of her stories. 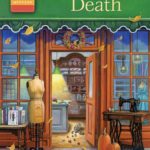 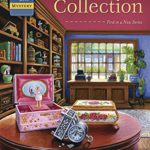