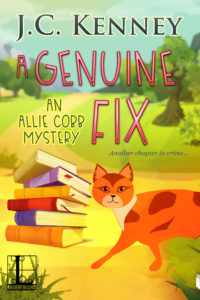 Running the family literary business while preparing for her best friend’s wedding, chairing a park planning committee, and getting her rescue cat to bond with her boyfriend’s golden retriever doesn’t leave Allie Cobb much time for crime-solving. But when the guy who stood her up the night of her high school senior prom is killed and dumped in a pile of mulch, Allie’s suddenly the prime suspect.

It’s insulting enough that gambler, drunk, and all-around lowlife Georgie Alonso was found on the site of the memorial park honoring Allie’s deceased father. Now she’s fighting to clear her name and hold off a rush to judgment. But politics, decades-old secrets, and a slew of high-profile suspects make dangerous bedfellows as the eve of the park’s grand opening draws nearer. She’ll have to nab a killer soon, before her storybook life gets a bad ending…

A Chat with Officer Jeanette Wilkerson

Hello, everyone. It’s a pleasure to be here with you today. My name is Jeanette Wilkerson. I’m a friend of Allie Cobb. While we haven’t been friends very long, we’ve only known each other about a year, circumstances have helped us become really close.

We first met shortly after her father died. I’ll never forget that day. At the time, I was a reserve officer of the Rushing Creek Police Department. Her friend Sloane’s father had just been found murdered and Sloane was suspected of committing the crime. I was working at my desk when this tiny walking tornado of a woman stormed into the office, blew right past everyone, and marched straight into the office of Police Chief Matt Roberson.

Talk about announcing your presence with authority!

Over the next few days, we got to know each other under some pretty extreme circumstances. As in the first murder in Rushing Creek, Indiana in thirty years extreme.

Thanks to a lot of determination and hard work, the case was solved and the murderer brought to justice. As the newest member of the Rushing Creek PD, it was my first major felony case. The intensity of working a murder investigation was way higher than I could have imagined.

You see, Rushing Creek’s a little town, so we’re a small police department with a staff of less than a dozen. Most of our work involves fairly minor things, from issuing traffic tickets to investigating vandalism reports. Every now and then, we get called to break up a bar fight or intervene in a domestic disturbance. It’s important work, but not exactly headline grabbing stuff.
The murder of Thornwell Winchester changed all that. From the minute the victim’s body was found, every officer on the force put in twelve to eighteen-hour days until the collar was made. It was stressful and nerve-wracking. Even for the officers not assigned to the case, being faced with the town’s first murder in a generation made for some sleepless nights.

But that’s the nature of my job in Rushing Creek. My fellow officers and I are ready, willing, and able to serve. I hope you never need me. But if you do, I’ll be there.

As for Allie, if there’s ever another murder in Rushing Creek, I hope she doesn’t get herself involved in solving it. After all, it’s dangerous work best left to the professionals. Having gotten to know her though, I don’t see her standing on the sidelines, even if I want her to. She didn’t get the nickname Kickboxing Crusader by accident, after all.

Well, duty calls, so I need to go. If you’re ever in Rushing Creek, be sure to stop by the station and say hi. I’d be happy to show you around Rushing Creek. It really is a great place to call home. 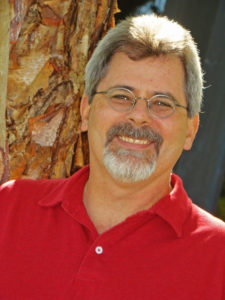 J.C. Kenney grew up in a household filled with books by legends Agatha Christie and Lilian Jackson Braun, among many others, so it was no surprise when he found himself writing mystery stories. When he’s not writing, you can find him following IndyCar racing or listening to music. He lives in Indianapolis with his wife, two sons, and a cat who is the inspiration for Ursula in the Allie Cobb Mysteries.

2 Responses to “A Genuine Fix by J.C. Kenney – A Chat with Officer Jeanette Wilkerson + Giveaway”