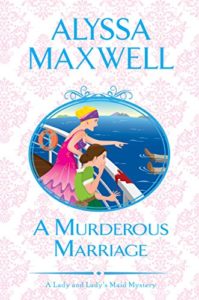 Lady Phoebe Renshaw and her lady’s maid, Eva Huntford, are preparing for a wedding, but it may not be the happy occasion everyone hopes for . . .

Since the Great War, some family fortunes have suffered, including those of the Renshaws. Despite being the granddaughter of an earl, Julia Renshaw is under pressure to marry for money—and has settled for Gilbert Townsend, a viscount and a wealthy industrialist. He is decades older than Julia, and it’s clear to her sister Phoebe—and to Eva, who has been like a surrogate mother to the girls—that this is not a love match. Nevertheless, the wedding takes place—and in a hurry.

At the reception aboard the groom’s yacht, there appears to be tension between Gil and several guests: his best man, a fellow veteran of the Boer War; his grouchy spinster sister; and his current heir, a nervous young cousin named Ernest. The bride is also less than pleased when she discovers that her honeymoon will be more crowded than expected—with Gil’s pretty secretary, among others, coming along.

That very night, Julia pounds on her sister’s door, brandishing a bandaged hand and reporting a hot-tempered outburst on her new husband’s part. Julia is feeling doubt and regret about her hasty decision, but returns to the boat. Then the next morning, before the yacht can depart the harbor, Gil’s body is found in the water below—and Phoebe and Eva must discover who pushed him over . . . before the Renshaws’ social standing is irreparably stained by Julia’s arrest for his murder . . .

Eva stood on the main pier of the Royal Yacht Squadron, her arm linked with Hetta’s. The launch would be back for the rest of the guests, but she and Hetta and a few other servants might not make it on until a third crossing. Nor had they been invited to wait inside the building after the ceremony. Thank goodness both women had worn their sturdy woolen coats and close-fitting hats.

Footsteps echoed on the boards behind her, and Eva glanced over her shoulder. What she saw made her slide her arm free of Hetta’s and turn full around.

Theo Leighton, Marquess of Allerton, smiled grimly and shook his head. “Good morning, Miss Huntford. No, I’m not going. Bad enough I attended the wedding. Although, I am an invited guest.”

“It’s all right. I was surprised, too. I suppose the countess invited me to impress upon me the fact that Lady Julia is taken now.” He nodded to Hetta, who offered a shy smile and nodded back, though Eva caught the faintest hint of pity in her bright azure eyes. Hetta had not known him before the war, but its ravages were plain to see. His lordship had once been a handsome man—before the mustard gases of the Battle of the Somme. From the corner of his mouth to the left side of his chin and beneath, the chemical burns had left the skin pitted and stretched, a permanent sneer whether he willed or not. And his hands . . . It pained Eva to see him struggle to perform the simplest tasks, yet perform them he did, without assistance, with minimal fuss.

His last words sank in and took her aback. There had never been open acknowledgment of his affections for Lady Julia—at least not in Eva’s hearing. The intimacy of his admission, so at odds with their disparate stations, sent a heat of confusion to her cheeks.

And yet he had ventured onto the dock to speak with her. She owed him her attention, and any solace she could offer.

“Miss Huntford, is she, do you think, happy?”

Her heart dropped. Of course he would ask this—the one question she felt incapable of answering truthfully. She prided herself on her honesty; speaking lies was abhorrent to her. She narrowed her eyes in the glare cast by the steely waters and studied the Marquess of Allerton. What did he seek? An assurance of Julia’s happiness, or the knowledge that she had sacrificed her true desires for the good of the family? Which would put his mind more at ease, knowing she loved him still or believing her heart had switched its allegiance?

Desperation flitted at the corners of his eyes. His hands were balled in the pockets of his overcoat. He loved her; Eva believed that fully. And she realized, given the totality of the circumstances, what she must say.

“I believe my lady will be happy.”

A breath whooshed out of him, causing his shoulders to sag, his eyes to momentarily close. “I’m glad. It’s what I want. I watched her back at the church, listened to her take her vows, but I couldn’t be sure. You know her better than anyone. If you say she is happy, then I can go away believing it and get on with my life.”

Eva’s throat clogged, and she couldn’t trust her voice not to betray her. She forced a smile, a small one, which the marquess returned briefly. Then he thanked her, bade her and Hetta good day, and made his way back to the clubhouse.

Moments later, a motorcar pulled away from the building—a gleaming Silver Ghost that had once belonged to Theo Leighton’s deceased brother, who had been the Marquess of Allerton before him. He would make his way to the ferry landing and leave Cowes—and Lady Julia— behind him.

Eva turned away from the retreating motorcar. “Everything is fine,” she lied, because she could not have made Hetta understand, not with the language barrier between them. But she hadn’t exactly lied to the marquess. She hadn’t said, as he believed, that Lady Julia was happy. She had said she believed Lady Julia would be happy. Someday. Eva clung to the notion. But whether that happiness would someday include Theo Leighton, who could say?

The launch, having deposited its first round of passengers onto the decks of the Georgiana, had turned around and was once more approaching the pier. The doors of the clubhouse opened, and wedding guests began filing out.

Judging by the number of them, Eva and Hetta would be waiting for a third crossing. She drew Hetta off to the side so they wouldn’t be in the way.

Alyssa Maxwell knew from an early age that she wanted to be a novelist. Growing up in New England and traveling to Great Britain fueled a passion for history, while a love of puzzles of all kinds drew her to the mystery genre. She and her husband reside in Florida, where she loves to watch BBC productions, sip tea in the afternoons, and delve into the past. You can learn more about Alyssa and her books at www.alyssamaxwell.com.