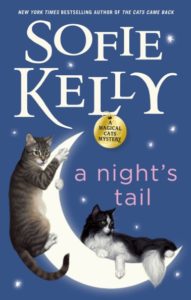 In the charming town of Mayville Heights, librarian Kathleen Paulson and her two cats pounce on clues to catch a killer, in the eleventh installment of this New York Times bestselling series.

Spring is coming to Mayville Heights, and Kathleen’s brother, Ethan, has arrived in town with his band, The Flaming Gerbils. But not everything goes as scheduled when one of Ethan’s bandmates gets into a fight with a man interested in investing in the town. When the businessman’s body is later found, Ethan’s friend is implicated in the crime.

Kathleen wants to help her brother by solving the case, but she has no shortage of suspects from which to choose. Prior to his death, the investor was fighting like cats and dogs with lots of people. If this librarian wants more than a whisker’s chance of solving the case, she will need to rely on her trusty feline sidekicks, Owen and Hercules. 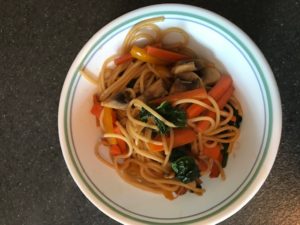 In the latest Magical Cats mystery librarian Kathleen Paulson’s brother, Ethan, is in town with his band, The Flaming Gerbils. Ethan’s lo mein is one of Kathleen’s favorite meals. (Mine, too!)

In a large pot of boiling water cook noodles according to package instructions. Drain well.

Heat the oil in a large skillet over medium-high heat. Add mushrooms, pepper and carrot. Cook, stirring frequently, until the vegetables are tender, about 3 to 4 minutes. Add snow peas and spinach and cook until the spinach has wilted, about 3 minutes.

Stir in noodles and sauce mixture, and mix so vegetables and noodles and coated with sauce.

I think this recipe originally came from the Damn Delicious website, which has lots of wonderful meal ideas.

*I’ve substituted bok choy for the spinach and left out the snow peas when I didn’t have any and everything still tasted great. 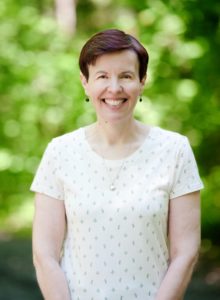