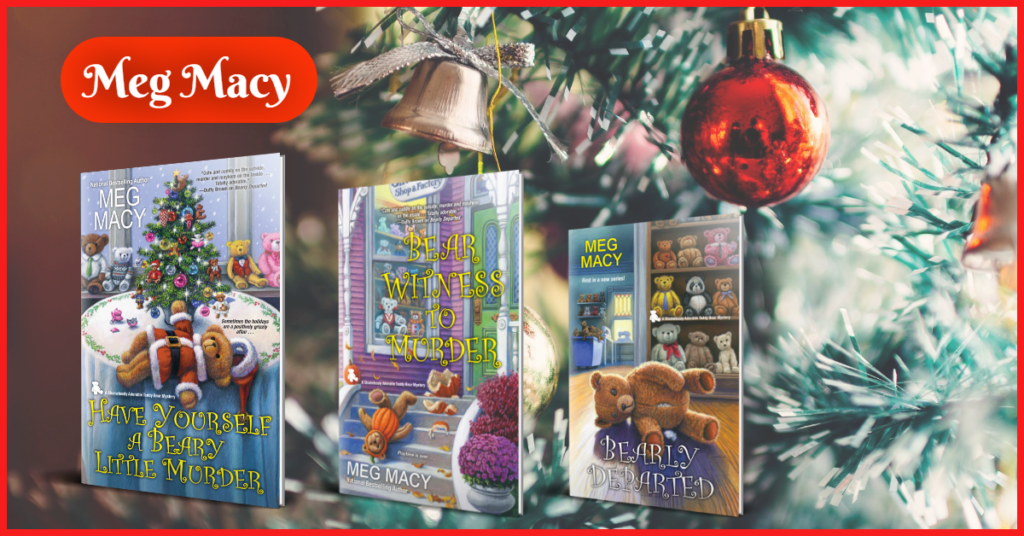 A Teddy Bear Cozy For Christmas

Who wouldn’t love to see a cuddly, soft, sweet teddy bear under the tree? Or a book, which is even better, with a teddy on the cover! The third cozy in my Shamelessly Adorable Teddy Bear mystery series from Kensington Publishing was released a few months ago – just in time for your holiday reading fun. But I have to admit my cozy series has a dark side. I mean, teddy bears … and murder? How did that come about?

Once I decided to write a cozy series, I researched all the different themes. Plus I’d been collecting teddy bears for years before my daughter was born. Ever since I saw a Paddington Bear at Harrods department store in London, in fact — that soft, woolly, stuffed bear in his blue raincoat and red hat had such an adorable and curious expression. I couldn’t resist buying him. The tag proclaimed, “Please look after this Bear Thank You” – so I plucked him up and squeezed him into the last tiny bit of suitcase space left over before heading to Heathrow airport and home.

There’d only been one other teddy bear cozy series years ago, with an ex-cop and his wife, a teddy bear crafter, investigating murders at teddy bear conventions. So I chose to create a teddy bear shop and factory, based on the Chelsea Teddy Bear factory (no longer in Michigan) and set in a small town that I’d already created in a holiday novella years ago. That was fun – and also created my protagonist, the shop manager who runs her parents’ shop. Sasha Silverman had two previous murders to clear up.

So in Book 3, HAVE YOURSELF A BEARY LITTLE MURDER, Sasha has to find out who killed the village mayor after his body is discovered before the annual parade and tree lighting ceremony. Why do readers love cozy mysteries? Because justice is always served in the end, and the fictional world is restored to normal. If only reality could be the same. Check out my latest mystery on Amazon, in Barnes & Noble stores, and other bookstores. Not there? Ask them to order it!

Don’t have a teddy bear? It’s never too late to get one. It’s a proven fact that sleeping with a stuffed teddy reduces anxiety and gives a sense of security. And have a BEARY MERRY CHRISTMAS! 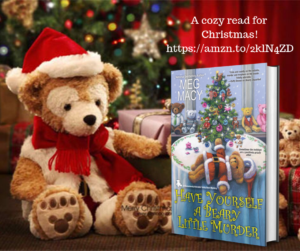 Have Yourself a Beary Little Murder by Meg Macy
A Teddy Bear Mystery Book 3
Kensington • September 24, 2019

Sasha and her sister Maddie are thrilled that the Silver Bear Shop and Factory has won the Teddy Bear Keepsake Contest, which means they get to produce a holiday specialty toy, a wizard bear named “Beary Potter.” Promising to be just as magical is Silver Hollow’s annual tree-lighting ceremony and village parade. Only one hitch: the parade’s mascot, Santa Bear—played by Mayor Cal Bloom—is missing.

After a frantic search among the floats, Bloom is found dead. When the outfit is removed, it’s clear the mayor’s been electrocuted. Who zapped hizzoner and then stuffed him into his Santa Bear suit? While the police investigate the grisly crime, Sasha attempts to track down the murderer herself, with some help from the Guilty Pleasures Gossip Club. Can they wrap up this case in time for Christmas—or will Sasha meet her own shocking end?