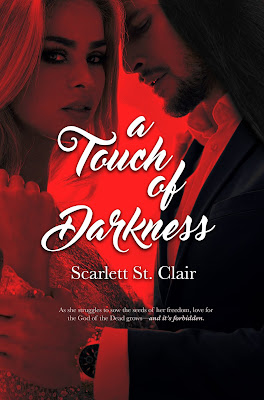 
Persephone is the Goddess of Spring by title only. The truth is, since she was a little girl, flowers have shriveled at her touch. After moving to New Athens, she hopes to lead an unassuming life disguised as a mortal journalist. Hades, God of the Dead, has built a gambling empire in the mortal world and his favorite bets are rumored to be impossible. After a chance encounter with Hades, Persephone finds herself in a contract with the God of the Dead and the terms are impossible: Persephone must create life in the Underworld or lose her freedom forever. The bet does more than expose Persephone’s failure as a Goddess, however. As she struggles to sow the seeds of her freedom, love for the God of the Dead grows—and it’s forbidden.

Excerpt:
Hades dealt each of them five cards. Persephone
looked at her hand and tried to remember what Hades had said about the
different ranks. She laid her cards down, face up and the man did the same.
“You have a pair of queens,” he said. “And I have
a full house.”
“So…you won,” she said.
“Yes,” he replied, and then claimed his prize
immediately. “Who are you rebelling against?”
She smiled wryly. “My mother.”
He raised a brow. “Why?”
“You’ll have to win another hand if I’m going to
answer.”
So, he dealt another and won again. This time, he
didn’t ask the question, just looked at her expectantly.
She sighed. “Because…she made me mad.”
He stared at her, waiting, and she smiled. “You
never said the answer had to be detailed.”
His grin matched hers. “Noted for the future, I
assure you.”
“The future?”
“Well, I hope this isn’t the last time we’ll play
poker.”
Butterflies erupted in her stomach. She should
tell him this was the first and final time she would come to Nevernight.
He dealt again and won. Persephone was getting
tired of losing and answering this man’s questions. Why was he so interested in
her anyway? Where was that woman he’d been with earlier?
“Why are you angry with your mother?”
She considered this question for a moment, and
then said, “Because…she wants me to be something I cannot.” Persephone
dropped her gaze to the cards, and then said, “I don’t understand why people do
this.”
He tilted his head, as if questioning. “You are
not enjoying our game?”
“I am,” she said. “But…I don’t understand why
people play Hades. Why do they want to sell their soul to him?”
“They don’t agree to a game because they want to
sell their soul,” he said. “They do it because they think they can win.”
“Do they? Win?”
“Sometimes.”
“Does that anger him, you think?” The question
was meant to remain a thought in her head, and yet the words slipped out
between her lips.
He smirked, and she could feel it deep in her
gut.
“Darling, I win either way.”
Her eyes went wide, and her heart stuttered. She
stood quickly and his name slipped out of her mouth like a curse.
“Hades.”

About the Author
Scarlett St. Clair lives in Oklahoma with her husband. She has a Master’s degree in Library Science and Information Studies. She is obsessed with Greek Mythology, murder mysteries, love, and the afterlife. If you are obsessed with these things, then you’ll like her books. Sign up for my newsletter! https://mailchi.mp/6e2593363f04/rayon…

4 Responses to “A Touch of Darkness by Scarlett St. Clair – Blitz + Giveaway”