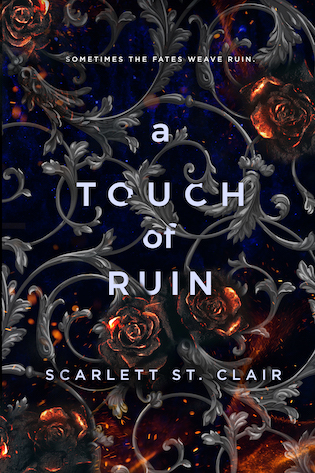 Persephone’s relationship with Hades has gone public and the resulting media storm disrupts her normal life and threatens to expose her as the Goddess of Spring.

Hades, God of the Dead, is burdened by a hellish past that everyone’s eager to expose in an effort to warn Persephone away.

Things only get worse when a horrible tragedy leaves Persephone’s heart in ruin and Hades refusing to help. Desperate, she takes matters into her own hands, striking bargains with severe consequences.

Faced with a side of Hades she never knew and crushing loss, Persephone wonders if she can truly become Hades’ queen.

Demetri must have felt her staring because he finally looked up from his tablet, the article he was reading reflected off his black-framed glasses. She noted the title. It was another piece about her.

That stone in her stomach was suddenly heavier. Shutting herself in Demetri’s office was like walking right back into her mother’s greenhouse—anxiety built, and she felt fear at the thought of being punished. Her skin grew hot and uncomfortable, her throat constricted, her tongue thickened…she was going to suffocate.

This is it. She thought. He is going to fire me.

She found herself frustrated that he was drawing it out. Why invite her to sit? Act like it had to be a conversation?

She took a deep breath and sat on the edge of her chair.

“What did you do?” she asked, glancing at the pile of newspapers. “Pick one up on every block?”

“Couldn’t help it,” he said, smirking. “The story was fascinating.”

“Did you need something?” she asked finally, hoping to change the subject—hoping that the reason he called her into his office had nothing to do with this morning’s headlines.

“Persephone,” Demetri said, and she cringed at the gentle tone his voice had taken. Whatever was coming, it wasn’t good. “You have a lot of potential and you have proven you’re willing to fight for the truth, which I appreciate.”

He paused and her body stayed tense, preparing for the blow he was about to deliver.

“But,” she said, guessing the direction of this conversation.

She blinked, brows furrowing. “Ask what?”

“For an exclusive. On your relationship with Hades.”

The dread crawled up her stomach, and spread, sizzling in her chest and lungs and she felt the heat abruptly leave her face.

“Why do you have to ask?” Her voice was tight, and she tried to stay calm, but her hands were already shaking and squeezing her coffee cup.

“You said you wouldn’t ask if you didn’t have to,” she stopped him. She was tired of him saying her name. Tired of how long it was taking him to get to the point. “So why are you asking?”

“It came from the top,” he answered. “It was very clear that you either offer us your story or you don’t have a job here anymore.”

“The top?” she echoed, and paused for a moment, searching for a name. After a moment, it came to her. “Kal Stavros?”

Kal Stavros was a mortal. He was the CEO of Epik Communications—which owned New Athens News. Persephone didn’t know much about him except that he was a tabloid favorite. Mostly, because he was beautiful—his name literally meant crowned the most beautiful.

“Why would the CEO request an exclusive?”

“It’s not every day the girlfriend of the God of the Dead works for you,” Demetri said. “Everything you touch will turn to gold.”

“Then let me write something else,” she said. “I have a voicemail and an inbox full of leads.”

It was true. The messages had started pouring in the moment she published her first article on Hades. She’d slowly been sorting through them, organizing them into folders based on the god they criticized. She could write about any Olympian, even her mother.

“You can write something else,” Demetri said. “But I’m afraid we’ll still need that exclusive.”

“You can’t be serious,” was all she could think to say, but Demetri’s expression told her otherwise. She tried again. “This is my personal life.”

Her boss’s eyes dropped to the stack of papers on his desk.

“And it became public.”

“I thought you said you would understand if I wanted to cease writing about Hades?”

She noted that Demetri’s shoulders fell, and it made her feel better that he was at least a little defeated by this, too.

“My hands are tied, Persephone,” he answered.

There was a stretch of silence, and then she asked, “That’s it? I have no say in this?”

“You have your choices. I need the article by next Friday.”

Scarlett St. Clair lives in Oklahoma with her husband. She has a Master’s degree in Library Science and Information Studies and spends a lot of time researching reincarnation, unsolved murders and Greek mythology-all of which made it into her debut novel, When Stars Come Out.

3 Responses to “A Touch of Ruin by Scarlett St. Clair – Blitz & Giveaway”