I received this book for free from NetGalley. This review is voluntary. My opinion is not influenced in any way. 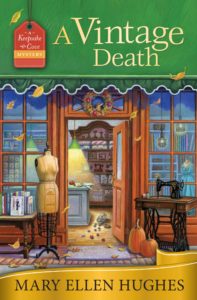 Callie Reed has put together a special event, but a killer is ripping it apart at the seams.

As the new owner of a music box store in Keepsake Cove, a quaint town full of collectible shops on Maryland's Eastern Shore, Callie Reed is eager to get more involved in her community. So she volunteers to plan the fall street decorations and welcome a visiting author who's come for a special book signing. But the celebratory mood is cut short when the local B&B owner is found dead, killed with a pair of vintage scissors.

Suspicion is cast on the victim's estranged wife, Dorothy, who owns Keepsake Cove's vintage sewing shop. Callie is sure Dorothy is innocent, and the visiting author agrees. Together, they begin their own investigation, only to discover that many people in Keepsake Cove have secrets. Secrets that are worth killing to keep.

A Vintage Death by Mary Ellen Hughes is the second book in the Keepsake Cove mystery series. I adored the first book and was so excited for this one to come out. In this installment, Callie is trying to figure out who wanted a local B&B owner dead – suspicion is on his estranged wife, but Callie knows Dorothy is innocent. She sets out (along with a visiting author, Lyssa) to prove Dorothy is innocent and track down the real killer. A Vintage Death has a great balance of time spent visiting with the characters we know and love in Keepsake Cove, and sleuthing out the mystery with Callie. I felt that the clues were presented in such a way that I didn’t guess the ending too soon – I love that! This was a 5-star read for me. I’m already looking forward to my next visit to Keepsake Cove.

Mary Ellen Hughes is the bestselling author of the Pickled and Preserved Mysteries (Penguin), the Craft Corner Mysteries, and the Maggie Olenski Mysteries, along with several short stories. A Fatal Collection is her debut with Midnight Ink. A Wisconsin native, she has lived most of her adult life in Maryland, where she’s set many of her stories.