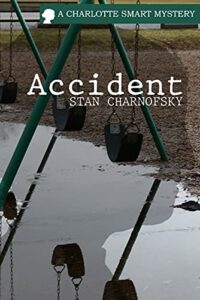 Charlotte returns to solve another case in the second installment of the Charlotte Smart Mystery Series.
Greg Smart, Charlotte’s brother, has flown in from California for his big sister Charlotte’s 70th birthday. Charlotte, the previous year, solved a murder when Greg visited her at her retirement village. The police officer who took a shine to her during the prior case has just asked Charlotte to take a look at a baffling hit and run “accident” that has left one victim dead. Charlotte weeps to discover that the victim is a child, and the second victim, the child’s older sister, is injured. Charlotte agrees to help immediately, and as soon as the two meet the child bonds with Charlotte who takes her under her wing. Charlotte will not let this child be hurt again. Meanwhile Greg continues to have an unexpectedly interesting love life while he and Charlotte work together to help to piece the child’s life and family back together by bringing a murderer to justice.

Greetings to all. My name is Stan Charnofsky and I hope you won’t have a problem with what I’m about to write. I’ve written several novels, and Hawkshaw Press of Delaware is publishing a series about a septuagenarian who lives in a retirement village in Pennsylvania and helps police solve murder mysteries.

This amateur sleuth, Charlotte Smart, is my version of Ms. Marple, and the three books in the series are Charlotte, Accident, and Broadway. I hope you enjoy the stories, but my purpose here is to disclose a bit about myself.

In my early years I was a good athlete and was signed by the New York Yankees to a bonus contract. Ah well, I wasn’t good enough to become a Big Leaguer, so I went back to my university and studied for my doctorate in Counseling Psychology. California State University Northridge, in the San Fernando Valley, hired me as a professor where I taught for many years before retiring just over a year ago.

I wish to describe a remarkable adventure I had as a professor, specializing in working with masters’ students becoming Family Therapists. Fortunately, I was awarded a Fulbright grant to spend a semester in Estonia with young people interested in psychology. Coldest I had ever been in my life!

Before my months there were over, I had one amazing experience after another. One of the older students (about age 27) offered to take me across The North Sea to Finland, and this young woman, Kaja by name, and I explored Helsinki, and even had our pictures taken next to the statue of the brilliant composer, Jean Sibelius.

On another occasion I took an overnight Ferry from Tallinn, Estonia, to Stockholm, Sweden, spent the day wandering and eating tasty food, and returned to the ship for our overnight voyage back. That was a scary happening! There was a furious storm and our ship was battered as if it were a toy. I absolutely thought we would be torn apart, but at dawn we made it safely to our harbor in Tallinn.

But perhaps the most fascinating event of all was when a middle-aged woman named Galina, a Russian ethnic teaching in Estonia, escorted me at Christmas time to her apartment in St. Petersburg, Russia. She told me a young student was living in her apartment, and that I could have the bedroom while she and her student companion shared a big bed in the front room. When our bus arrived in St. Petersburg, on Christmas Eve, I literally laughed out loud to see a huge billboard through the window, of a gaily clad Santa Claus drinking a coca cola.

While spending my five days in St. Petersburg, I got to visit the graveyard that had sculpted monuments of Dostoevsky, Tolstoy, and even Tchaikovsky, who happens to be my favorite composer. The weather was icy-cold, with a light snow falling, and, though I was holding onto Galina, I slipped, and we both went down. Luckily, no injuries. There was a psychology center in the city that was a center honoring the American famous psychologist, Carl Rogers, a revered icon of mine. Apparently, he visited once, and the local professionals loved him.

So, Galina stayed on for a while as I boarded a return bus to Estonia. I must close this reminiscence with the statement that I considered Estonia my second home in the world. That young woman who escorted me to Finland, Kaja, came to California, and I helped her earn her masters’ degree in Counseling Psychology. And finally, the adventures in Northern Europe provided ideas for much of my novel writing. While in Tallinn, I wrote a bundle of short essays called Views From The Fifth Floor.

Life goes on and I encourage all to celebrate it any way they can. 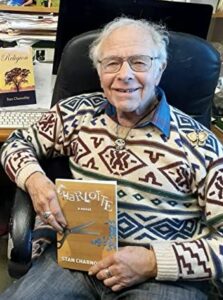 Stan is a wonderful man. He just turned 90, and he just retired from teaching at Cal State Northridge (CSUN), and was their oldest and longest-serving faculty ever. He taught marriage and family counseling, and was once, briefly, a Yankee, and was also, for about 10 years, the baseball coach at CSUN. He is a lovely man with many students indebted to him. He also wears butterflies. Many decades ago students started gifting him with butterfly pins; he has hundreds, and every day he pins one on. I know he is older but he is still writing and is a vital and lovely person.