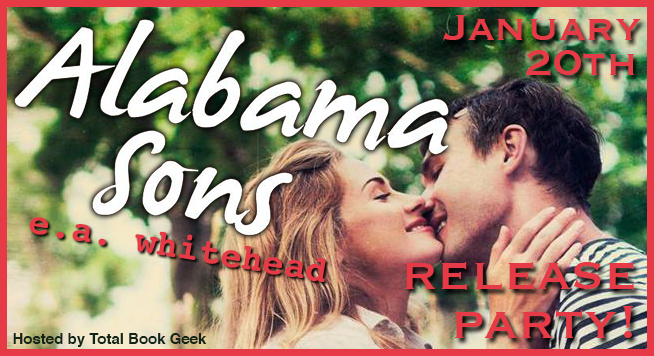 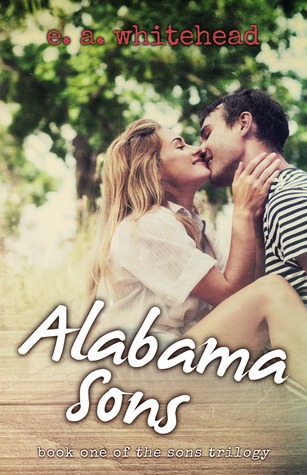 Penny Wilmot leads a simple life. Together with her widowed father and best friend Boone they run a small U-Pick farm. She never asked for much, and certainly wasn’t looking for him…

Jackson Hawkes lives his life at one steady speed: fast. On a mission to find his father, he takes a road trip and ends up finding himself with a new band, a new job and a new dream.

The two meet by accident and begin a romantic adventure in the summer heat of Alabama. But what happens when the pair find out that they have the one thing in common that took their whole worlds away from them?

Death. It takes things away, but can it bring the two together?

“SHE MADE SMALL talk look good. She laughed at my stupid jokes, and quirked an eyebrow when I made comments about her being the prettiest girl in the restaurant tonight.

“Boy, you sure lay it on thick.” She shook her head and laughed toward the open window.

Maybe I was, I didn’t want her to feel cheap. I wanted to tell her I was just nervous, but truthfully I had a feeling she had a thing for Boone. I wanted to look more like a man and less like a pussy driving a beat up Jeep Wrangler as we followed Boone’s lifted 80’s restored Chevy C-10 pickup. Every time he revved forward the vibrations of his truck reverberated through the Jeep making my manhood grow a size smaller.

“Naw, just want a pretty girl to feel appreciated.” Ok, Jackson, don’t listen to yourself or anything; keep laying it on thick like an asshat.

I reached over her lap and dropped down the glove box; fishing around for the pack of gum I knew I had thrown in there. “Can I get this for you, please? You’re going to kill us.” She put her hands over mine and pushed me away. Her hands felt small and warm, but her grip was fierce. It instantly made me imagine her hands elsewhere.

“Thanks.” I couldn’t look at her as she handed me the piece of gum, putting one in her mouth also. I was sure if I caught her glance the wrong way in my direction I’d end up springing to attention right here in the car. “So where do you go to school?” I decided to change the topic to something so far from sexual it would take a miracle to relate it back.

“I don’t right now. I took a year off. I was going to the community college for Human Sexuality, though.” She looked at me and I could feel my mouth dropping lower as she spoke. “I want to be a Sex Ed teacher eventually.”

How in the fuck is this my life?

“That’s an odd…” I paused with question not wanting to offend her, “vocation choice?”

She nodded. “Yeah, but, someone has to do it. I just want to teach them to be safe, they’re going to do it anyway, might as well let them know it’s ok if you’re being cautious and not just doing it because you’re being pressured. Kids don’t relate to movies and putting a condom on a banana anymore. They need to be taught through 20th century know-how.”

I choked on the excess saliva from the gum chewing.

“Yeah, well I understand where you’re coming from, but you think you really wanna teach all those kids The Way of the Warriors?” I hope she got my sperm joke.

“Someone has to teach them, Jackson. I’m not saying I’ll be the Mother Theresa of sexual indemnity. But, I hope to at least help them understand it’s ok to love someone and still stay safe.” I couldn’t take my eyes off her, she kept surprising me, and I hadn’t expected this from her.

“JACKSON!” she yelled and my eyes whipped forward as we almost crashed into the back of the gigantic pick-up truck.

I slammed on the brakes. Boone had slowed down to find parking on Duncan’s packed suburban street. “FUCK!” I reached across and slammed my right forearm into her chest protectively. “Sorry!” I pulled in behind Boone in the line of parked cars. “I’m sorry, you distracted me.” Better be honest from the starting gate, Jackson. I stared at her, still breathing a little heavier from the adrenaline.

She looked back at me, calm as a cucumber. “It’s just sex, Jackson,” she climbed down from the Jeep, turning back, looking at me with soft eyes and a hard smirk “don’t be distracted by it.” 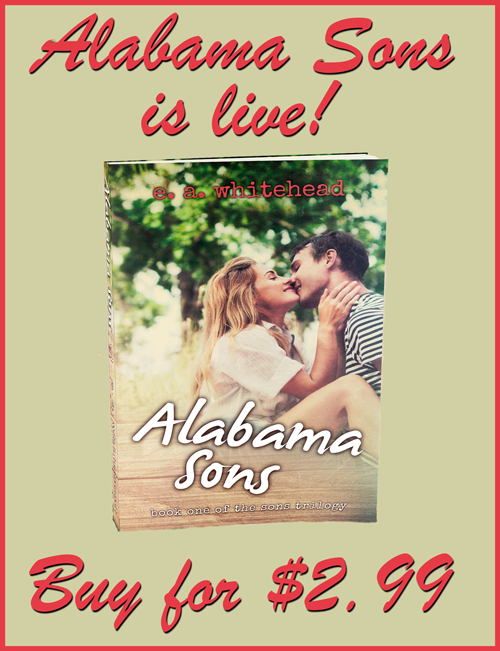 About E.A. Whitehead:
E.A. Whitehead is the author of Alabama Sons, book one of The Sons Trilogy. She spends an unhealthy amount of time ‘pinning’ things and getting lost in a fantasy world where everything is DIY and she owns a 12-room house to decorate. She obsesses over hockey (go Bruins!), all things Harry Potter, and her cats Little Bear and Baby Girl. She also believes that Wanderlust will cure your soul, live your dreams passionately!
Website – Facebook – Twitter – Goodreads

If you haven’t had enough join us on Facebook for Q&A, giveaways and much more!