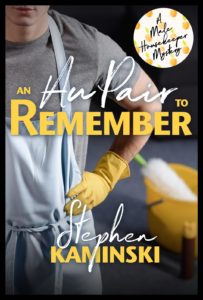 From the author of the award-winning Damon Lassard Dabbling Detective series comes the Male Housekeeper Mysteries, focusing on charming characters, snappy dialogue, eclectic murders, and cunning confidence schemes. To his mind, Cam Reddick has failed—as a husband, as a father, and as a professional. After recognizing that his vanilla credentials didn’t stack up in a big city brimming with overachievers and toiling in drudgery for half of a decade, an emotionally raw Cam returns to his childhood hometown—the quaint and quirky village of Rusted Bonnet, Michigan. He’s determined to resuscitate relationships marred by youthful immaturity, most importantly those with his ex-wife Kacey Gingerfield (who doubles as the village’s Deputy Chief of Police) and their first grader, Emma. Armed with striking looks and an endearing proclivity for mixing metaphors, but saddled by “momma’s boy” tendencies, Cam takes the helm of his mother’s housekeeping business—Peachy Kleen. Access to homes across the village facilitates Cam’s penchant for amateur sleuthing as Kacey’s aide-de-camp. Surrounded by Kacey, his sophisticated mother Darby, garrulous senior housekeeper Samantha, and recuse fish cum confidant Bait, Cam’s circuitous journeys to solving murders and unravelling complex cons hasten his struggle down the path of self-healing to self-respect. And there’s hope that—just maybe—he can rekindle the romance he once had with Kacey.

In An Au Pair to Remember, Cam’s plan for a quiet return to Rusted Bonnet is dashed when a beautiful German au pair, Greta Astor, is found dead in Dutch McRae’s foyer with all signs pointing to a hastily disassembled trip wire at the top of the stairs. When Kacey learns that Cam was cleaning the McRae home the previous afternoon, she confides to him that Chief Bernie Leftwich is set on arresting Dutch for the murder—either alone or in tandem with Greta’s bartender boyfriend. But she worries that Bernie’s been duped. And later, when his mother Darby becomes a suspect, Cam inserts himself into the investigation and stumbles through a series of ostensible incongruities—a thief swallowing a cache of stolen diamonds, a snack food distributor laundering money, and a Cash-for-Gold scam. Meanwhile, Peachy Kleen’s young African housekeeper has disappeared with one of the company vans. All the while, Cam finds himself flirting with his new neighbor and struggling with his complicated feelings for Kacey.

Peanut butter-colored foundation poorly disguised the pockmarks on Tatum McRae’s cheeks. She sat bolt upright in the center of Darby Reddick’s camel-backed settee, spasmodically nibbling on an apple slice like a chicken pecking at feed.

Cam had driven straight to Darby’s from the McRae house, intent on finding out how her questioning went that morning before jetting off to his next cleaning appointment. He and Becka Blom were slated to tackle a 1970s split-level owned by a germaphobe who once confided to Cam that she spent as much money on professional cleaning as she did on her car payment.

“Tatum and I ran into each other at the police station,” Darby explained when Cam entered his mother’s living room. “We decided we both needed some cheering up.”

“It certainly was a nice gesture for your mother to invite me for tea,” Tatum said, her eyes darting from Cam to Darby to a fruit plate on the coffee table in front of her. Her hair was as thick as a broom.

Darby sat on the edge of a recliner and pointed Cam to the stone bench stretching across the front of the hearth. Cam filled a napkin with pear and peach slices and sat.

“I didn’t realize you two knew each other,” he said.

Darby waved a hand. “The McRaes have been in Rusted Bonnet for almost five years. The first time I saw Tatum, she was pregnant with Nicolas and Sophie.”

“Big as a house I was with those two,” Tatum chipped in.

“How did it go with the chief?” Cam asked Darby.

“My lawyer was a no show,” Darby said. “He dropped his boy off at school this morning and went back to his blind in the woods to meet a buddy. He called Bernie from the road.”

“I don’t understand grown men sitting in a tree for hours on end with guns or bows or whatever they have,” Tatum said.

“My late husband hunted pheasant when Cam was little,” Darby responded. “The man seemed to relish those days as much as any vacation we took. But I will say it must be better than sitting on a frozen lake watching a fishing pole in a hole.”

“I’m pretty sure ice fishing is just an excuse to drink,” Cam said.

“I suppose that’s true,” Darby agreed. “Seeing as how my need for a lawyer just sprang up and his hunting day was planned, we all agreed to an interview on Wednesday.”

“At least you have a little reprieve,” Cam said.

“And time to get a new tire,” Darby said. “But I want to get it over with. Tatum has been telling me how pigheaded Bernie’s being.”

“Is that why you were at the station?” Cam asked. “For questioning?”

“Not today.” She made a perturbed noise. “No, after taking my mother to the doctor this morning, I had to drop off copies of the tax forms I filled out for Greta. I can’t imagine why anyone cares about those now.”

“How is your mother? Dutch mentioned you were taking her when I saw him this morning.”

“Oh, she’s fine,” Tatum scoffed. “She’s an old drama queen when it comes to her health. I think she likes the attention she gets from the nurses. More importantly, how are my stairs?”

“All of the blood came out.”

Tatum smiled. Coffee stained teeth clashed with her garish red lipstick. “Thank you. Now I have one more favor to ask you, Cam—can you please tell that ex-wife of yours to stop pestering me and my husband?”

Cam’s head reflexively snapped back. “I’m not sure if I can do that,” he managed, then added, “it is a murder investigation.”

“And it seems to me that Chief Leftwich thinks my husband did it. As if! I know Kacey’s just doing what she’s told, but it’s not exactly comfortable.” 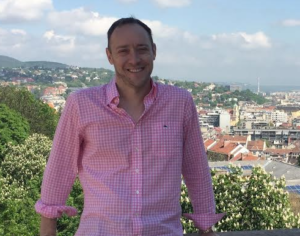 Stephen Kaminski is the author of An Au Pair to Remember, the first installment of the Male Housekeeper Mystery series. He also writes the award-winning Damon Lassard Dabbling Detective books. Stephen is a graduate of Johns Hopkins University and Harvard Law School and serves as the Chief Executive Officer of the trade association representing the United States’ poison control system and its fifty-five centers. He lives with his daughter and rescue kitty in the Washington, DC area.