Thank you for stopping by my tour stop for ARRGH! by Stacey Campbell. This is a middle grade fantasy adventure and the tour runs January 5-9 with reviews, interviews, guest posts and excerpts. Check out the tour page for the full schedule! 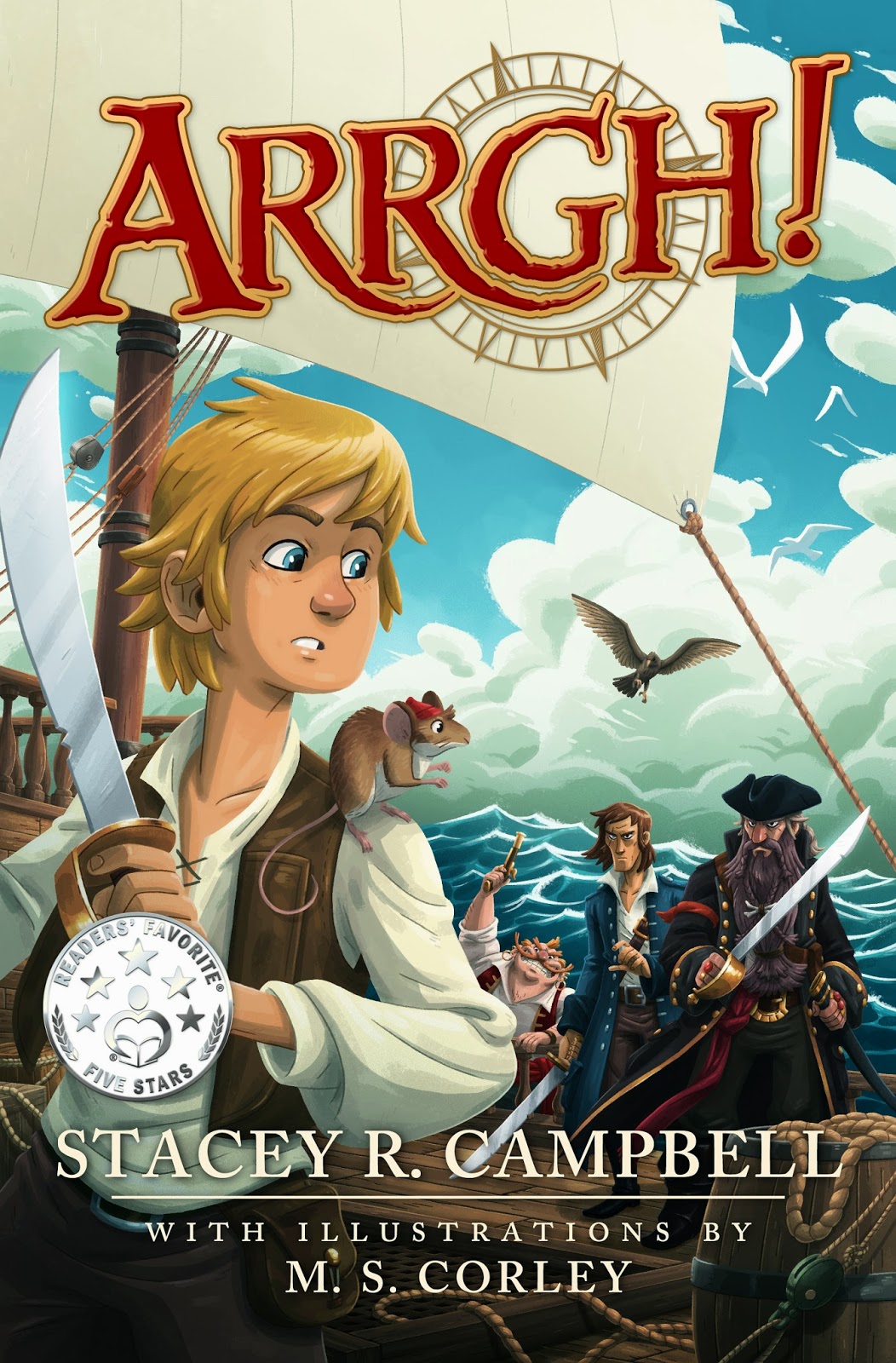 Forced to remain silent after being kidnapped by pirates Christopher must find a way to save an innocent merchant ship’s captain and his daughter from the evil grasp of Captain Redblade proving that friendship and family are worth fighting for no matter the costs.

From his cabin below, Captain Hughes cursed as he watched the pirates stretch a plank between the two ships and a boarding party rush his deck.

“What is it ye dolt? Can’t ye see I be busy?” Boots straightened his coat and checked his appearance in the reflection of his saber’s polished blade.

“The boy!” Stinky hunched over, resting his hands on his knees. He took two big gulps of air. “I can’t find the boy, the girl, or the pesky old cook.”

“They be gone, Boots. Port side skiff, too.”

Boots grabbed Stinky by the scruff of his neck. “Speak not another word and say noth’n of this to another soul!” he threatened. “Ain’t nothin’ that old cod and them two worthless brats can do to us anyhow.”

A hawk cry pierced the air. With two giant pulls from its powerful wings, it landed on the massive shoulders of its master.

“Good girl,” a menacing deep voice cooed while placing a tiny leather hood over the bird’s powerful head. The rings on the man’s fingers reflected the intensity of the sun’s final moments on the horizon, with the red sky matching the rubies set within three of the seven bands he wore. From the man’s left ear hung a feather matching his hawk’s on a golden hoop. His long, soot-colored beard reached his waist, braided in places with beads made of bone tied to the ends.

The boards creaked as he stepped onto the ramp connecting his ship to the one he just acquired. The men before him cheered and dipped their heads as he passed. A gust of wind caught his blood-splattered, black dress coat, pushing it open. He always wore black. The color calmed him.

The boarding party moved aside as Boots stepped forward. “Cap’n,” he bowed, “the Georgiana.” Boots swept his hand in front of him.

Red Blade’s eyes scanned the ship from beneath his tricon hat.

Stacey R. Campbell lives in the Pacific North West with her husband, three daughters, three dogs, and a pet turtle named Todd. She is a graduate of the University of Washington. At the age of seven Stacey was told that she would never be the writer she dreamed of being because she is dyslexic. Finally Stacey found that she could not look her children in the eyes and tell them that they could be what ever they wanted to be if she did not do the same. Now Stacey can’t stop writing and loves to help children pursue their own dreams. Stacey is the young adult author of Hush, A Lakeview Novel and Whisper, A Lakeview Novel. ARRGH! is Stacey’s first middle grade book.

For more books from this author, visiting information, and author events please visit Stacey at: