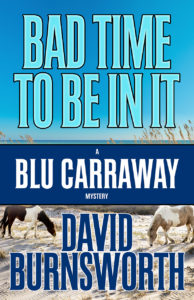 Bad Time To Be In It by David Burnsworth
A Blu Carraway Mystery Book 2
Henery Press • July 10, 2018

The past is never past. Sometimes it repeats itself. And sometimes it comes back to pay a visit.

Blu Carraway, flush with cash and back in business, never had it so good. Or so he thought.

The reality is his love life is in shambles, his business partner is spending too much time with women half his age and not enough time on the job, and someone close goes missing.

Blu tries to avoid the first and second by focusing on his work, but it’s the third that very nearly does him and everyone around him in.

His business partner goes off the rails, his friends show their true colors, and he realizes that getting closure sometimes means walking away from everything.

With a case from the past gone wrong twice, a loved one in trouble, and an unanswered marriage proposal, it’s a bad time to be in it for Blu Carraway Investigations.

How many people does it take to write a book?

What I should probably title this is “How many people does it take to finish writing a book?” because that’s what I really mean. I once met someone who wrote a first draft of what they called a book and wanted someone else to edit and rewrite it. No thanks. I prefer to struggle with my own work, thank you very much.

I write my first draft all by myself. And I can’t lie, it’s an ugly baby. But, given enough attention and time to grow, even ugly babies can turn into something special. The thing about a first draft phase is it isn’t something most authors can skip. More than half of the words in my first drafts make it to the finished pages. They might not be in the same order and spelled the same way, but they’re there. Without some semblance of an attempt of a story typed out, I would never get to a published book on the shelf.

This leads to the second draft. I also work on this all by myself. I take my train-wreck of a first draft and try to unwreck it. I fix obvious plot holes, reshuffle the scenes around, cut out the flowery descriptions I used to make my daily word count goals in the first draft phase, and fix the “obvious-to-me” spelling and punctuation errors. The second draft is still unattractive, but it’s no longer ugly.

From this point on, the project is no longer a solo effort. I submit it to my publisher and another reader simultaneously and after a few weeks get feedback for a third draft. Two more rounds of this, with more eyes reviewing the same manuscript, it goes to the Advanced Reader Copy (ARC) phase. At this phase, I send it out to reviewers and other readers to help make the final polishes on it.

After all of that, it is a completed work and is available for purchase. Over the years I’ve honed the time of this process down from twenty-four to about ten months, give or take. It still takes a long time and many rereads, but I enjoy rewriting. I like to receive feedback and use it to make my book the best it can be. Writing isn’t easy and it shouldn’t be a completely solo effort. I’m appreciative of all the hands involved along the way. Thanks for reading! 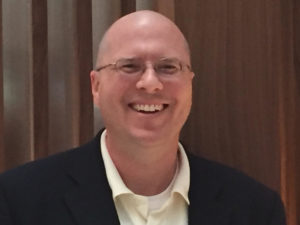 David Burnsworth became fascinated with the Deep South at a young age. After a degree in Mechanical Engineering from the University of Tennessee and fifteen years in the corporate world, he made the decision to write a novel. In It For The Money is his fourth mystery. Having lived in Charleston on Sullivan’s Island for five years, the setting was a foregone conclusion. He and his wife call South Carolina home.