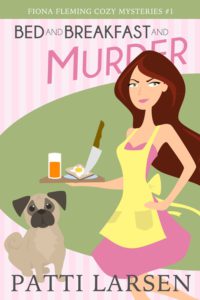 A Poo Poo Kind of Morning

I tried not to look down the mouth of hell staring back at me from inside the glaringly pristine outer ceramic shell of the white throne, my throat catching, stomach doing half flips and a rather impressive rollover routine that would have gotten at least a 9.5 even from the Russian judges. Instead, I forced myself to smile and swallow and remind myself the elbow length yellow rubber gloves grasping the handle of the standard issue plunger were all that stood between me and Pooageddon.

Suck it up, Fee. Big girl panties and adulting and all that.

“At what point,” I waved the dripping plunger, wincing as droplets of yuck flew, “did I think owning a bed and breakfast was going to be glamorous and romantic?”

Fiona Fleming hasn’t lived in Reading, Vermont in over a decade, her escape from small town living leading her to New York City and a life of adventure. An adventure that has left her with no career, an ex who cheated on her and zero plans for the future. Her grandmother’s death grants her a new chance–inheriting Petunia’s, Iris Fleming’s bed and breakfast, seems like the ideal fresh start. But when Fee finds out ownership of the property Iris willed her might be in question, she’s drawn into the seedy underbelly of the cutest town in America after being singled out as the main suspect in a murder.

First, you have to leave home, and with good reason. Because you hate the place and the small-minded people who live there and their tiny little goals and dreams when you want more, more, all of the more. Don’t forget to depart with fanfare and a few big blowup fights with people who will talk about how rude you were to everyone they can share their story with. Oh, burn those bridges, burn them down hard. Hurt your mother and father by giving them the cold shoulder and the angsty sayonara they deserve for daring to raise you in Small Town, U.S.A.

Okay, got that part? Excellent. Now, go to college, waffle over what you’re taking and settle on the Arts because you can’t get a job with an Arts degree so it’s a great choice. Emerge from school four years later with a propensity to drink too much on weekends and crippling debt that forces you to take three minimum wage jobs just to buy groceries. Oh, and don’t forget to hand over all the rest of it to your boyfriend who is in law school so he can finish his degree. But it’s okay because you’re going to be together forever and as soon as he graduates you’ll get married and he’ll put you through school.

All righty, moving along to ten years after departing your home town in a huff and a bother, living in a tiny apartment that smells of cat litter even though you don’t own a cat with same said boyfriend drinking too much every night with the boys over in your tiny living room or out with those boys now that he’s a fancy lawyer and has a good job at a law firm. Leaving you to continue to work as a barista/waitress/call center girl to make your own ends meet because heaven forbid he share anything he makes with you.

Darling. Baby. Sweetheart. He has his own bills to pay.

Now, accidentally stumble on his phone and find out he’s been texting a girl—translation sleeping with—for about a month. And then, crying into one hand and thumbing through his contacts with the other realize you’ve been trying to make a life with a man who’s been cheating on you systematically since you met.

Hang in there. We’re almost home.

Slap him when he arrives that nigh, accuse him of all of the above before storming out of your shared apartment and vowing to make it on your own. Only to discover all of your friends are actually his friends and you’re about as alone as you’re going to get.

Until the phone rings while you huddle in your apron in the back of the coffee bar, wondering how to get your stuff out of the jerk’s apartment without running into him and where are you going to live now because couch surfing will only get you so far. You answer that fateful ring and you’re told by your tearful mother who you only speak to on holidays and birthdays that your grandmother just died and would you please come home because you’re named in her will.

Now for the last bit. Pay attention, this is important. You take everything you said and did when you left said small town and biff it out the window—it’s been ten years, after all, surely everything is sparkles and light back there now compared to New York—and set sights on a new beginning in an old place as the caretaker of a bed and breakfast named after a snorting, farting, bossy pug named Petunia. While pretending you didn’t just use the past decade to alienate your loving parents and the entire population of the place where you grew up.

And that, my dears, is how you go home again.

Bed and Breakfast and Murder by Patti Larsen is the first book in the Fiona Fleming cozy mystery series. This is a fun mystery that is perfect for reading on a lazy afternoon. It is very easy to lose yourself in the story. The characters were a hoot and I absolutely adored the B&B setting in Vermont. If you like light, funny cozies, Bed and Breakfast and Murder will be right up your alley. This is a series I will turn to when I need a quick escape with an enjoyable mystery.