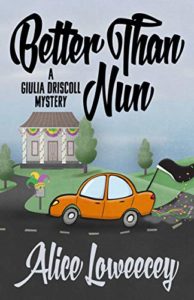 Giulia Driscoll used to say running a detective agency was the busiest job she’d ever had. Then the ghosts showed up, and she figured now she’s the busiest ever. This of course challenged the Universe to say, “Hold my beer.”

Today she’s running the agency, sleuthing on behalf of the ghosts, and being the mother of a two-month-old. At last she understands those 5-Hour Energy commercials.

The Universe then dropped two clients in her lap for Mardi Gras: a family greedy to find hidden money and the son of her least-favorite person, Ken Kanning of The Scoop. The positive: a date night! The not-so-positive: it’s a working date night. Driscoll Investigations is joining the big Mardi Gras costume charity gala to search for potential thieves. Kanning Junior will be at the party showing off his tame ghost.

The Scoop, a few hundred drunk revelers, a mercenary family, and a ghost who isn’t as tame as the kid thinks. What could possibly go wrong?

Did someone just hear the Universe say, “Hold my beer”? 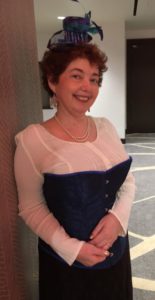 Alice Loweecey is a baker of brownies and tormenter of characters, Alice Loweecey recently celebrated her thirtieth year outside the convent. She grew up watching Hammer horror films and Scooby-Doo mysteries, which explains a whole lot. When she’s not creating trouble for her sleuth Giulia Driscoll or inspiring nightmares as her alter-ego Kate Morgan, she can be found growing her own vegetables (in summer) and cooking with them (the rest of the year).