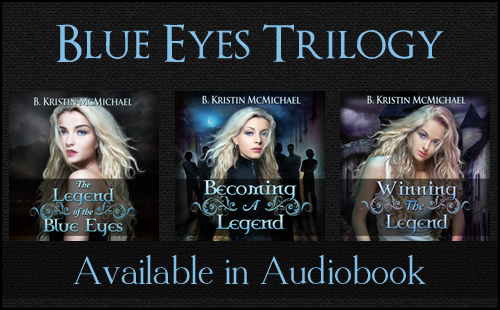 All three books of the bestselling Blue Eyes Trilogy are now available in audiobook format.
The Blue Eyes Trilogy by B. Kristin McMichael sounds like such a good series. It sounds even better in audio! Check out the awesome excerpts below. You can get a taste of the stories, plus hear the great narration. I’ve really become a big fan of audiobooks over the last year or so. It’s such a great way to experience a book – and to get more reading done! I love reading when I’m cleaning, or exercising.
Narrated by Caprisha Page.
Available at Amazon, Audible, and iTunes

Owners of the $0.99 Kindle edition of The Legend of the Blue Eyes can buy the professionally narrated audio edition for $1.99
*******

The Legend of the Blue Eyes
www.bkristinmcmichael.com/lotbe 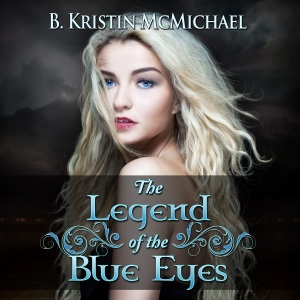 Arianna Grace liked her boring Midwestern teenage life where she ignored the many unanswered questions of her childhood. Why were her parents dead? Why doesn’t she have a family? Why do her memories only start at five? When someone offers to explain it, Arianna thinks she is just getting answers. Instead, she is thrown into a world of night humans that drink blood.

On Arianna’s sixteenth birthday, her world is thrown upside down when she changes into a vampire. Night humans, or demons as some call them, live in normal society. Learning all the new rules of a world she didn’t know existed would be hard enough, but it’s further complicated by two former-friends that now want to help her take her role as the successor to her grandfather.

There is a war going on between the night humans. Sides have been taken and lines are not crossed. Four main clans of night humans are struggling for control of the night. Divided into two sides, clans Baku and Tengu have been at war for centuries with the clans Dearg-dul and Lycan. That is, until Arianna Grace finds out the truth; she is the bridge of peace between the two sides. But not everyone wants peace. With the night humans divided onto two sides, Arianna is now a pawn in the war between them. Arianna must choose a side- her mother’s family or her father’s- and for once in her life decide her own fate. 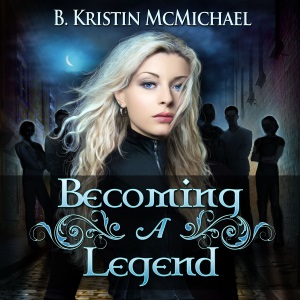 Arianna Grace is about to turn seventeen, and her life has been very complicated lately. She is the leader of four clans of night humans: dearg-dul, baku, tengu, and lycan. While the four clans seem to get along better with each other, there is internal conflict on both sides of her family, not to mention the three boys vying for her attention. Devin is set on keeping her safe above all else. Turner’s goal is to make her happy. And Andrew wants her for himself. At some point Arianna will have to choose between them, but first she needs to survive the plots against her.

Edward Lucan is making a chase for the power to lead the baku clans and is playing his cards by using his nephew Andrew to lure Arianna into a trap. Unfortunately for Lucan, Andrew has his own plans. He has spent the last year waiting for Arianna to see him as more than a friend, and he now finds it necessary to make a move for her affection, despite his uncle.

In the dearg-dul estate, Arianna discovers that the ambitious Lord Seeger has been laying his own strategies for power and is slowly poisoning her. After getting away with her grandfather’s murder, he is setting his sights on her. Luckily for Arianna, her team is on to all of the plans and is making their own counter strategies. Will it be enough to keep Arianna safe? Several people close to Arianna have been keeping secrets. If Arianna is to take power and control of the night, she will need to know the truth. Will someone finally tell her what it really means to become the legend everyone is waiting for, before it is too late to turn back? 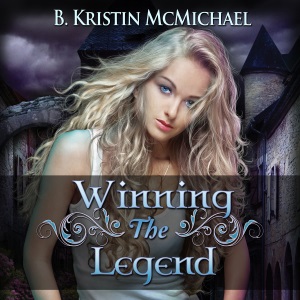 Arianna has gathered the outside clans to decide her fate in marriage. A tournament will be held, and she is the prize, whether she wants to be or not. The only thing for her to do is watch the clan leaders fight over her, or is it? Thanks to her team’s well-made plans, Arianna has other strategies in place. Hopefully one of those plans will earn her freedom.

As the contestants gather and she learns more about the night human world, there are new allies to keep close and more enemies to keep even closer. Some even hold more secrets to her legend and possibly the actual reason to her existence. Now Arianna must decide what to do with the fate she has been dealt. The time has come to step out of the shadows of the men who protect her, and into her own power. The time is now for Arianna to take control, and fight for the destiny she wants to live. 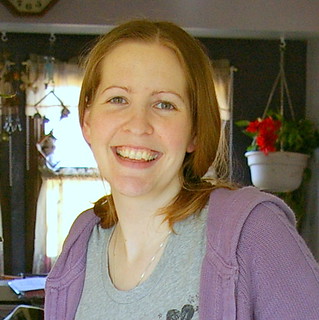 About the Author:
Originally from Wisconsin, B. Kristin currently resides in Ohio with her husband, two small children, and three cats. When not doing the
mom//thing of chasing kids, baking cookies, and playing outside, she is
using her PhD in biology as a scientist. In her free time she is
currently hard at work on multiple novels. Every day is a new writing
adventure.


Stores:
Amazon | Audible | iTunes
Giveaway:
Three winners will win the full set of the Blue Eyes Trilogy in audiobook (via audible.com)
International (where audible.com is available)

One Response to “Blue Eyes Trilogy by B. Kristin McMichael – Now in Audio + Giveaway”