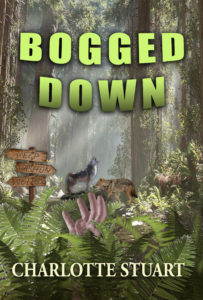 Bogged Down by Charlotte Stuart
A Vashon Island Mystery Book 1

BOGGED DOWN is a mystery set on Vashon Island, a place that has been described as Mayberry-meets-Burning Man. Its motto: Keep Vashon Weird.

Lavender (Lew) Lewis moved there because it is only a twenty-minute ferry ride from Seattle, yet light-years away in tempo and character. She grew up on a commune in Alaska, joined the army at 17, does woods parkour for exercise and HR investigations to earn a living. Life in her waterfront cabin with her two food-obsessed cats is predictable and relatively stress-free. Until she leads a tour group into an ancient bog on the island and discovers a body.

Guest Post – Writing a Book Review
During my time as a speech instructor and debate coach, I was not a fan of the grading system. It was not difficult to set up guidelines to assess how well someone was mastering content or acquiring new skills, but it was sometimes hard to “give” the grade to an individual. For example, if a person had earned a “C” it felt like I was labeling them as mediocre rather than simply as someone who, in my class, had performed at the same level as most of the other students. The grade didn’t measure effort or improvement or even necessarily the knowledge accumulated by the end of the course. It was simply a snapshot in time using a standard evaluation tool.

Book reviews can feel like class grades, but the guidelines for assessment are both individual and not necessarily well defined. And you don’t usually know the person doing the evaluation, which makes it even more elusive.

From the reader’s point of view:

Most readers prefer certain categories of books. Of course, how you feel about a book can also be subject to what is going on in your life at the time, including whether you’re able to sit back and relax with a book or you read it by snatching a few minutes here and there. I’ve gone back to books that I quit reading for one reason or another and sometimes quite enjoyed them. Other times, of course, the starting again experience just verified my original response. The question is what guidelines do we use when evaluating what we like or dislike?

After participating in several book clubs, I’ve slowly come to appreciate how people’s preferences are influenced by what they bring to the reading of a book because of their own innate traits and personalities. And, since I write humorous mysteries, I’ve also done a lot of thinking about why we don’t all laugh at the same things. With so many reader variables, it’s surprising there’s as much consistency as there is in reviews. Although I believe that the self-selection process of only reading the type of book you like may be the main reason for this.

There’s also the reluctance of most readers to take the time to write a review. Readers may not realize how much reviews influence sales. Or, they may think they need to write a lengthy review when one or two sentences would suffice. What is said in a review is, unfortunately, less important than the review count.

From the writer’s point of view:

Writers want as many reviews as they can get. Still, some of us feel uncomfortable asking for them. Especially when you’re just starting out and are hyper sensitive about feedback. Many assume authors have big egos because they put their work out there for everyone to see and comment on. But the number of articles on how authors shouldn’t take bad reviews to heart suggests otherwise. At least for some writers.

For me, finding my audience, my niche, has been a challenge. I thought I was writing a cozy when I wrote Bogged Down (A Vashon Island Mystery). But when judged by traditional cozy standards, my book does not fare well. The Vashon community is not as small or isolated as the tradition village setting. My character is flawed and has a prickly personality. And animals are at least implicitly in danger given the book’s theme of the wilding of the island. To counter potential misconceptions, I’ve referred to the mystery as a “modern cozy” or a “cozy 2.0.” But I’ve had to accept that some reviewers are disappointed when the fit is a bit messy.

From the seller’s point of view:
There’s a reason seller’s like Amazon try to identify what books a reader might like and make suggestions for potential purchases based on that – they want to sell more books! For that reason, Amazon has developed an algorithm to determine reader preferences. They also have an algorithm to determine which books they want to “push,” and that is allegedly based on the number of reviews. I’ve read that the magic number is 50.

You can’t blame sellers for wanting to sell books; that’s the business they’re in. But it makes it difficult for new authors to get a foothold in the marketplace. It’s the old adage of the rich getting richer–.

My request to readers is two-fold.

First, please take the time to write reviews, if for no other reason than to support authors in general, and especially to encourage new authors during these difficult financial times.
Second, reflect on the standards you use for evaluating a book in a particular category. Not only will that enable you to write better reviews, it will help you make better selections about what you want to read in the future.

Thank you for reading my post. I wish you many happy hours of reading. 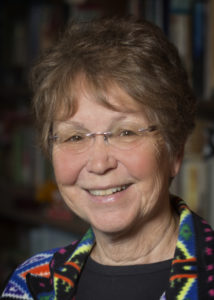 In a world filled with uncertainty and too little chocolate, Charlotte Stuart has a passion for writing lighthearted mysteries with a pinch of adventure and a dollop of humor. She began her career in academia, spent nine years commercial salmon fishing in Alaska, was a partner in a consulting group, and a VP for a credit union. Currently, she is the VP for Puget Sound Sisters in Crime and lives and writes on Vashon Island in Washington State’s Puget Sound. She spends time each day entertained by herons, seals, eagles, and other wildlife.