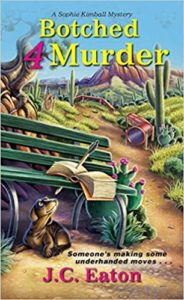 Sophie “Phee” Kimball is getting dragged into the drama again at her mom’s Arizona retirement community. A new board member wants to get rid of two golf courses and replace them with eco-friendly parks, and some of the residents are pretty teed off about it. On top of that, her mother’s book club friend Myrna is being pushed out of the bocce league. These seniors are serious about winning, and Myrna’s dragging them down. She’s so bad at bocce, in fact, that when a community member’s dead body is discovered while Myrna’s practicing for a tournament, she assumes it was one of her own errant balls that killed the woman.

But before Myrna can be tossed off the bocce court and into criminal court, the police find an arrow in the victim’s neck. It looks like this was no accident—and Phee and her investigator boyfriend Marshall will have to team up to bounce a killer into the slammer…

“The recreation center board will be holding its monthly meeting Monday night. That’s the day after tomorrow. I say we all show up and give that Sorrel Harlan a piece of our minds. What do you all say? Are you in?”

The Booked 4 Murder book club and Herb’s buddies agreed they would all attend the meeting on Monday night.

I’d started on my second cup of coffee when, out of nowhere, Cecilia turned to me and said, “What about you, Phee? Will you be attending?”

“Of course you should! They may be talking about legal matters, and who better than you should be there?” I couldn’t believe those words were coming out of my mother’s mouth.

“Legal matters? Who better than me? Anyone would be better than me. I’m a bookkeeper. Just because I work for a private investigation firm doesn’t make me an expert when it comes to the law.”

My mother wouldn’t give up. “Well, you’re dating someone who is. I’ll bet Marshall knows all about the law.”

“Marshall’s a private investigator, not a lawyer. And while he may have a familiarity of the law as it pertains to his business, I seriously doubt I’d call him an expert on legal matters.”

“It doesn’t matter. At least he knows something. That’s more than I can say for those buffoons who’ll be shooting their mouths off at Monday’s meeting.”

“You’re not suggesting I ask Marshall to attend that meeting, are you?”

My mother was silent for a moment and cleared her throat. A bad sign. She was going to use emotional blackmail on me. I was trapped. There was no way I was about to sabotage my relationship with Marshall by dragging him into another Sun City West escapade. It was bad enough he had to deal with the book club ladies a few months ago, when one of the actors turned up dead during the fall production. Talk about a real Agatha Christie murder. That investigation had fiasco written all over it. I didn’t need to introduce another one.

“Okay, Mom. Okay. You win. I’ll sit in on the meeting. But I’m not going to ask Marshall to join me, understood? I’m sure he’d rather spend the evening watching the sports channel or something.”

“Good. Good,” Herb said. “Now that we’ve got that settled, we need to get every homeowner we know to that meeting, especially the ones who live on or near a golf course. I’ve still got everyone’s email from our neighborhood block party last summer. I’ll shoot out an email as soon as I get home.”

Louise scraped some of the butter from her bagel.

“Wanda and Dolores are catty-corner from the golf course. They’ll want to come. Last year someone cut through their yard from the golf course, messing up their new landscaping. Now, with this idiotic eco-friendly park idea, we’ll have all sorts of ne’er-do-wells traipsing all over the place.”

Shirley offered to call everyone she knew from the sewing club. Cecilia was going to send an email to the ladies social committee from her church, and Lucinda agreed to email her bridge club.

“I’ll call the rest of the Booked 4 Murder ladies who couldn’t be here today,” my mother said. “Riva had to get her hair done, Marianne’s still getting over a cold, Constance has out-of-town company, and my sister Ina is on some retreat with her husband. What about you men? You need to get off your duffs and make some noise, too.”

Kenny agreed, somewhat reluctantly, to let his neighbors and friends know as well. “Good thing the meeting’s taking place in the social hall. We know that room can hold a crowd.” Nightmarish thoughts of the last time I was in the social hall came back to me in a flash. It was the summer my mother and the book club ladies were convinced a book curse was killing off their members. I tried not to shudder as I took another bite of my bagel.

Herb leaned across the table, moving his head from left to right. “So, are we all set with this?”

A cacophony of noises ensued as everyone responded at once. Then, as if it wasn’t bad enough I’d agreed to attend the meeting, Herb gave me a wink. “Maybe Phee would like to speak at the meeting. She did a good job last time.”

If I hadn’t already swallowed the piece of my bagel, I would have choked on it. “No! I’m not speaking. The last time was different. It was that ridiculous book curse thing. This time I’m going as a spectator only. A spectator.” I reached for my coffee and tried to ignore the two words my mother whispered to me, “For now.” 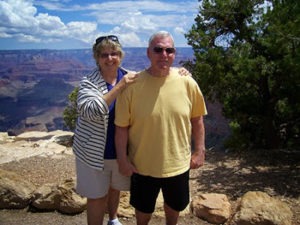 New York native Ann I. Goldfarb spent most of her life in education, first as a classroom teacher and later as a middle school principal and professional staff developer. Writing as J. C. Eaton, along with her husband, James Clapp, she has authored the Sophie Kimball Mysteries (Kensington) set for release in June 2017. In addition, Ann has nine published YA time travel mysteries under her own name. Visit the websites at www.jceatonauthor.com and www.timetravelmysteries.com

When James E. Clapp retired as the tasting room manager for a large upstate New York winery, he never imagined he’d be co-authoring cozy mysteries with his wife, Ann I. Goldfarb. His first novel, Booked 4 Murder (Kensington) is set for release in June 2017. Non-fiction in the form of informational brochures and workshop materials treating the winery industry were his forte along with an extensive background and experience in construction that started with his service in the U.S. Navy and included vocational school classroom teaching.