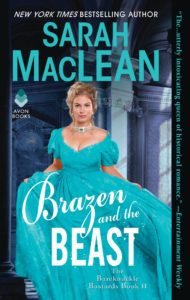 New York Times Bestselling Author Sarah MacLean returns with the next book in the Bareknuckle Bastards series about three brothers bound by a secret that they cannot escape—and the women who bring them to their knees.

The Lady’s Plan
When Lady Henrietta Sedley declares her twenty-ninth year her own, she has plans to inherit her father’s business, to make her own fortune, and to live her own life. But first, she intends to experience a taste of the pleasure she’ll forgo as a confirmed spinster. Everything is going perfectly…until she discovers the most beautiful man she’s ever seen tied up in her carriage and threatening to ruin the Year of Hattie before it’s even begun.

The Bastard’s Proposal
When he wakes in a carriage at Hattie’s feet, Whit, a king of Covent Garden known to all the world as Beast, can’t help but wonder about the strange woman who frees him—especially when he discovers she’s headed for a night of pleasure . . . on his turf. He is more than happy to offer Hattie all she desires…for a price.

An Unexpected Passion
Soon, Hattie and Whit find themselves rivals in business and pleasure. She won’t give up her plans; he won’t give up his power . . . and neither of them sees that if they’re not careful, they’ll have no choice but to give up everything . . . including their hearts.

She’d learned, for example, that if a lady could not get away with wearing trousers (an unfortunate reality for the daughter of an earl, even one who had begun life without title or fortune), then she should absolutely ensure that her skirts included pockets. A woman never knew when she might require a bit of rope, or a knife to cut it, after all.

She’d also learned that any decent escape from her Mayfair home required the cover of darkness and a carriage driven by an ally. Coachmen tended to talk a fine game when it came to keeping secrets, but were ultimately beholden to those who paid their salaries. An important addendum to that particular lesson was this: The best of allies was often the best of friends.

And perhaps first on the list of things she had learned in her lifetime was how to tie a Bosun knot. She’d been able to do that for as long as she could remember.
With such an obscure and uncommon collection of knowledge, one might imagine that Henrietta Sedley would have known precisely what to do in the likelihood she discovered a human male bound and unconscious in her carriage.

One would be incorrect.

In point of fact, Henrietta Sedley would never have described such a scenario as a likelihood. After all, she might have been more comfortable on London’s docks than in its ballrooms, but Hattie’s impressive collection of life experience lacked anything close to a criminal element.

And yet, here she was, pockets full, dearest friend at her side, standing in the pitch dark on the night before her twenty-ninth birthday, about to steal away from Mayfair for a night of best-laid plans, and…

Lady Eleanora Madewell whistled, low and unladylike at Hattie’s ear. Daughter of a duke and the Irish actress he loved so much he’d made her a duchess, Nora had the kind of brashness that was allowed in those with impervious titles and scads of money. “There’s a bloke in the gig, Hattie.”

Hattie did not look away from the bloke in question. “Yes, I see that.”

“There wasn’t a bloke in the gig when we hitched the horses.”

“No, there wasn’t.” They’d left the hitched—and most definitely empty—carriage in the dark rear drive of Sedley House not three-quarters of an hour earlier, before hiking upstairs to exchange carriage-hitching dresses for attire more appropriate for their evening plans.

At some point between corset and kohl, someone had left her an extraordinarily unwelcome package.

“Seems we would’ve noticed a bloke in the gig,”

“I should think we would have,” came Hattie’s distracted reply. “This is really just awful timing.”

Nora cut her a look. “Is there a good time for a man to be bound in one’s carriage?”

Hattie imagined there wasn’t, but, “He could have selected a different evening. What a terrible birthday gift.” She squinted into the dark interior of the carriage. “Do you think he’s dead?”

Please, don’t let him be dead.

Silence. Then, a thoughtful, “Does one store dead men in carriages?” Nora reached forward, her coachman’s coat pulling tight over her shoulders, and poked the dead man in question. He did not move. “He’s not moving,” she added. “Could be dead.”

Hattie sighed, removing a glove and leaning into the carriage to place two fingers to the man’s neck. “I’m sure he’s not dead.”

“What are you doing?” Nora whispered, urgently. “If he’s not dead, you’ll wake him!”

“That wouldn’t be the worst thing in the world,” Hattie pointed out. “Then we could ask him to kindly exit our conveyance and we could be on our way.”

“Oh, yes. This brute seems like precisely the kind of man who would immediately do just that and not immediately take his revenge. He’d no doubt doff his cap and wish us a fine good evening.”

“He’s not wearing a cap,” Hattie pointed out, unable to refute any of the rest of the assessment of the mysterious, possibly dead man. He was very broad, and very solid, and even in the darkness she could tell that this wasn’t a man with whom one took a turn about a ballroom.

This was the kind of man who ransacked a ballroom.

“What do you feel?” Nora pressed.

“No pulse.” Though she wasn’t precisely certain of the location one would find a pulse. “But he’s—”

Dead men were not warm, and this man was very warm. Like a fire in winter. The kind of warm that made someone realize how cold she might be.

Ignoring the silly thought, Hattie moved her fingers down the column of his neck, to the place where it disappeared beneath the collar of his shirt, where the curve of his shoulder and the slope of…the rest of him… met in a fascinating indentation.

“Quiet.” Hattie held her breath. Nothing. She shook her head.

Hattie couldn’t have agreed more. But then…

There. A small flutter. She pressed a touch more firmly. The flutter became firm. Slow. Even. “I feel it. She said. “He’s alive.” She repeated herself. “He’s alive.”
She exhaled, long and relieved. “He’s not dead.”

“Excellent. But it doesn’t change the fact that he’s unconscious in the carriage, and you have somewhere to be.” She paused. “We should leave him and take the curricle.”

What seemed important was seeing his face.

Clinging to the handle at the edge of the door, Hattie collected the lantern from the upper rear corner of the carriage before swinging back out to face Nora, whose gaze flickered immediately to the unlit container.

The tilt became a shake. “If you peek, you’ll regret it.”

“I have to peek,” Hattie insisted, casting about for a decent reason—ignoring the odd fact that she was unable to tell her friend the truth. “I have to untie him.”

“Not necessarily,” Nora pointed out. “Someone thought he was best left tied up, and who are we to disagree?” Hattie was already reaching into the pocket of the carriage door for a flint. “What of your plans?”

There was plenty of time for her plans. “Just a peek,” she repeated, the oil in the lantern catching fire. She closed the door and turned to face the carriage, lifting the light high, casting a lovely golden glow over—

Nora choked back a laugh. “Not such a bad gift after all, perhaps.”

“What kind of man…” she trailed off. Shook her head.

What kind of man looked like this and somehow landed in the carriage of Hattie? 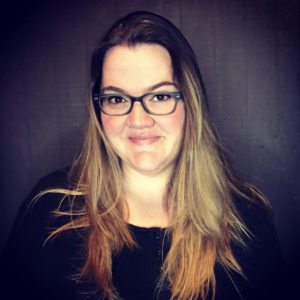 A life-long romance reader, Sarah MacLean wrote her first romance novel on a dare, and never looked back. She is the New York Times and USA Today bestselling author of historical romances and a columnist for The Washington Post, where she writes about the romance genre. She lives in New York City. Visit her at www.sarahmaclean.net.