Emma Blackwood’s favorite pastime is solving literary murder mysteries…until the body in her living room makes everything a little too real.

When Emma comes to the Black Hills to work at her Aunt Rose’s B&B, …

END_OF_DOCUMENT_TOKEN_TO_BE_REPLACED

Psychic Cass Donovan must uncover the truth about long-buried secrets and recent murders to bring peace to a troubled spirit and bring justice to a flesh-and-blood killer . . .

END_OF_DOCUMENT_TOKEN_TO_BE_REPLACED

Gambling with Murder: A Southern California Mystery
by Lida Sideris
About Gambling for Murder

A late-night call is all it takes for rookie lawyer Corrie Locke to kiss her day job at the movie studio goodbye, and do what she does best: flex her sweet P.I. skills and go undercover to find a senior who’s missing from a posh retirement community. One small stumbling block: skirting past security to gain inside access to the exclusive Villa Sunset. Time to call in the …

END_OF_DOCUMENT_TOKEN_TO_BE_REPLACED 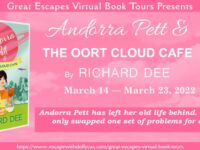 Andorra Pett and the Oort Cloud Café by Richard Dee

Andorra Pett has left her old life behind. But has she only swapped one set of problems for another?

Andorra’s on the rebound. Her only thought is to get a world away from her cheating ex. With her best friend Cy in tow, she invests her meagre savings in a run-down cafe. Never mind that it’s on a space station orbiting Saturn, or that Andorra is accident-prone and can’t make toast without a recipe and a video. Surely running a cafe can’t be that hard, right?

Unfortunately, her dreams of a quiet life are not to be, she’s bought into a mystery, trouble is just around the corner.

When the body of the …

END_OF_DOCUMENT_TOKEN_TO_BE_REPLACED

The phony war has dragged out past Christmas into a dark and dreary New Year, 1940.

In the blackout, someone murdered BBC engineer Frank Kennedy, making him more popular dead than alive. A blackmailer and bully, he sold out his friends, assaulted his Broadcasting House colleagues, and sabotaged his employer.

END_OF_DOCUMENT_TOKEN_TO_BE_REPLACED

In this World War II-era historical mystery series debut by Joyce St. Anthony, small-town editor Irene Ingram has a nose for news and an eye for clues.

Irene Ingram has written for her father’s newspaper, the Progress Herald, ever since she could grasp a pencil. Now she’s editor in chief, which doesn’t sit …

END_OF_DOCUMENT_TOKEN_TO_BE_REPLACED

Caroline Popov, alone, heartbroken, and deeply in debt ends up in glamorous Palm Springs, California where Native casinos have just opened, offering employment to thousands. She lands a job at the Palm Oasis Casino where she is mentored by the charismatic tribal chairman, John Tovar.

Embraced by casino culture, Caroline works her way up to casino manager of the …

END_OF_DOCUMENT_TOKEN_TO_BE_REPLACED

A bitter dispute over the breaching of dams in Idaho sparks emotions at a summit held at the Spotted Pony Casino. When the keynote speaker is murdered, Dela Alvaro, head of security, teams up again with FBI Special Agent Quinn Pierce.

The suspects are many since it appears the victim was playing …

END_OF_DOCUMENT_TOKEN_TO_BE_REPLACED

Cordelia Davis lives with no regrets, despite her life changing drastically a half century ago when a tornado altered the destiny of the little Ozark town of Willow Lane. The town grew back stronger and more beautiful, and Cordelia, her …

END_OF_DOCUMENT_TOKEN_TO_BE_REPLACED

A new client, Lexie Lovell, brings Rosedale Investigations a compelling mystery. Her father died and left his estate to be split between her and her brother, Teddy. Lexie never knew she had a brother until the will was read and nobody has a clue where the boy and his mother are. Lexie can’t get her money until the boy …