For Elea, there’s never been a better time to turn away from witch life. The Tsar is in exile. The Vicomte is dead. And Rowan? Falling for him only broke her heart. Instead of casting spells, Elea spends her days running Braddock Farm and enjoying the flirtations of the very handsome and non-magical Philippe. Everything is going perfectly, except for one problem.

Someone’s trying to kill her.

Shujaa is a Changed One, a Creation Caster mage whose mutated form makes him invincible in battle. Now that the Tsar and Vicomte are gone, Shujaa wants to rise and rule. To do so, he must eliminate all those powerful enough to oppose him, and Elea is top on his list. Anyone who offers her aid quickly ends up dead.

In the end, there’s only one person who can keep Elea safe while helping her defeat Shujaa: Rowan. Like it or not, Elea must team up with her old love. With Philippe along for the ride, Elea plans to team with Rowan without losing her heart this time. But that’s when all her plans fall apart…

Monster House Books is celebrating the launch of the ebook version of CHERISHED! As a result, the first two books in the series are specially priced for a limited time! To find out more, visit: http://monsterhousebooks.com/blog/cherishedpromo My Three Keys to World Building

My book, CHERISHED, tells the story of Elea, a woman who wants to be a farm girl but ends up as the most powerful Necromancer in the realm. She ends up falling for Rowan, a powerful mage from entirely different style of living and casting. CHERISHED is book three in my Beholder series (if you aren’t familiar with the series, there’s a quick trailer right here.) In any case, I’m now doing an author tour to celebrate the launch of CHERISHED, and I’ve been asked to share some world building tips by the wonderful folks at Brooke Blogs. Here goes!

OK, so I got this idea from Tolkien. Language drives so much of a world, it isn’t even funny. How a character speaks gives you a structure for their name and the places around them. Plus, it can also help inspire their history as well. In the Beholder Series, Elea’s people have a German language base, which is a rough and clipped-sounding language. By contrast, Rowan’s mages are based on the gorgeous and fluid tones of Swahili.

PRO TIP: Google Translate is awesome here. There are also about a million web sites for baby names by culture.

It’s also important to have a Pinterest board of cool stuff that you find inspiring in general. For me, that board is hidden. My public boards are here. Sarah J Maas has some cool boards that you may want to check out as well. 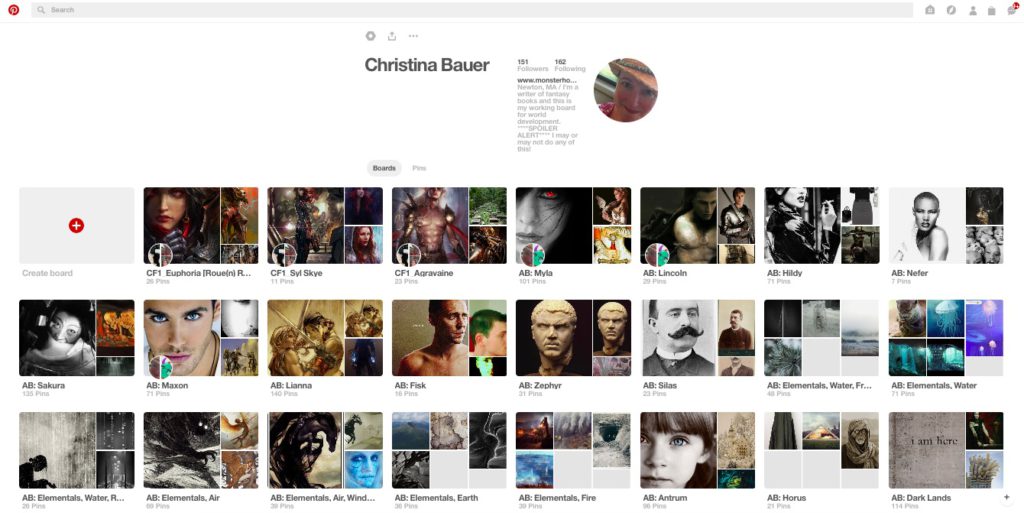 PRO TIP: I suggest making a board for any major character, place, power or battle. Also, it’s great to have a miscellany board where you just throw cool images. Mine is a hidden board called “needs a home.” Whenever I get stuck, I open my board and always find something.

Some folks swear by writing in MS Word, but in my experience, that’s a lot of wear and tear when you’re first building a world. A professional writing tool allows you to organize research, move chapters around easily, and in general be a badass. You won’t realize how much you’ve been craving it until you give it a try. I put all my ‘world bibles’ (lists of names, places and descriptions) in here, too.

So that’s it…my favorite tools and tricks. Hope you found them helpful!

Thank you so much for the opportunity to answer this thoughtful question; I certainly enjoyed the journey of writing my response. If you think of more queries, please know that I’m always up for reader interaction, and more information on how to contact me is listed below.

Christina Bauer knows how to tell stories about kick-ass women. In her best selling Angelbound series, the heroine is a part-demon girl who loves to fight in Purgatory’s Arena and falls in love with a part-angel prince. This young adult best seller has driven more than 500,000 ebook downloads and 9,000 reviews on Goodreads and retailers.

Bauer has also told the story of the Women’s March on Washington by leading PR efforts for the Massachusetts Chapter. Her pre-event press release—the only one sent out on a major wire service—resulted in more than 19,000 global impressions and redistribution by over 350 different media entities including the Associated Press.

Be the first to know about new releases from Christina by signing up for her newsletter: http://tinyurl.com/CBupdates