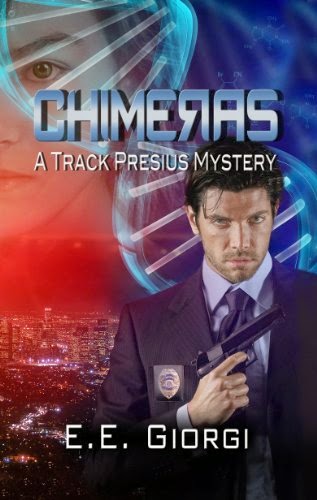 Haunted by the girl he couldn’t save in his youth, and the murder he committed to avenge her, Detective Track Presius has a unique gift: the vision and sense of smell of a predator. When a series of apparently unrelated murders reel him into the depths of genetic research, Track feels more than a call to duty. Children are dying — children who, like himself, could have been healthy, and yet something, at some point, went terribly wrong. For Track, saving the innocent becomes a quest for redemption. The only way he can come to terms with his dark past is to understand his true nature.

PROLOGUE
It was one of those hot summer afternoons, with air made of cobwebs and a glare as sharp as pencils.
“Something’s wrong today,” I said.
“It’s L.A.,” my partner replied. “Something’s always wrong in L.A.”
A few hours later Johnny Carmelo was dead, his brains skewered by the whistling path of one of my bullets. He collapsed on the pavement, a red trickle of blood weeping down his face. They told me they weren’t going to clear me back to duty until the investigation was over. I left the next day. I drove up to the Sierras, camped in my truck, and hunted at night.
There are days I long to disappear in the wild, go back to the predator life I was meant to have. Kill the prey or be killed: it’s in my genes.
A chimera, that’s what I am. And this is my story. 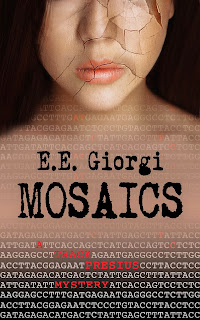 Dubbed the Byzantine Strangler because of the mysterious mosaic tiles he leaves at the crime scene, a new serial killer is stalking the streets of Los Angeles. Racing to decipher the code encrypted in the tiles before the killer strikes again, Detective Track Presius faces a new challenge: the “awakened” genes that make his vision and olfactory sense so sharp are now taking a toll on his life. When a new set of tiles appears in his own backyard, Track makes a chilling realization: those very same genes that are threatening his life are drawing the Byzantine Strangler closer and closer. The line between hunter and hunted has suddenly blurred. Will Track be the next piece of the mosaic puzzle?

A dark hallway with no windows opened to the right of the foyer. The smells changed—the staleness of a vacant place and the victim’s scent—feminine, ambitious, seductive. The wall displayed wrought iron sconces and a collection of photos of Amy—Amy in her graduation gown, Amy with friends, Amy with her cat. A pretty face, I noticed, whose beauty didn’t distract from an underlining drive for determination.

Her bedroom was orderly. There was a half-empty birth control kit in her nightstand drawer, but no boyfriend in her life, according to the friends and relatives interviewed, only an ex-husband who now lived in Oregon. Toiletries on her vanity table, regular clothes in her closet, a few garments in her drawers that told me she was no nun, but no distinctive masculine scent anywhere. If she shared her bed with somebody, she’d done a good job at hiding it. The sheets smelled clean and freshly washed.

The next door let to her home office, a small carpeted room with a couple of white bookcases, a table with a desktop and printer, a metal chair, and, on the opposite side, a futon, a laundry basket, and an ironing table folded against the wall. Through the window, the hills of Montecito glowed against the evening sky, a wavy fabric of glimmering lights.

I inhaled. The bookshelves were crammed with medical books, the desk buried under stacks of papers.

The sweet, foul smell of the tiles…

I sat at the desk, opened the drawers, sniffed the keyboard, then the computer screen.

Not here. Close, though.

The papers. He went through the pile of papers.

I rummaged through the folders not knowing what to look for, just tailgating a smell. Gloved fingers had brushed through printouts and graphs, tables, essays, research proposals…

Did he find what he was looking for? And if so, what?

Article after article of scientific jargon, each title some random permutation of the words immunodeficiency, vaccine, study design, therapy, antiretroviral.

“What are you gonna see in the dark?” By the office door, Satish flipped the light switch.

“Yeah. And patterns, too,” I said. I sniffed the top right corner. I could follow the gloved fingers searching through the pile of papers, most likely a left thumb holding up the top ones so he could read the titles, and a right index flipping through. Until the trace stopped.

He found what he was looking for. Probably took it with him.

I inhaled and gave one last look around. Everything else seemed untouched.

“What did Gomez have to say?”

Amy Liu smiled too, from a silver frame on her desk, a man’s hand draping her shoulder, and a strand of black hair blowing over her face.

“Fine,” I said, walking past him out of the room. “I’ll keep you company on Thursday, but—”
He switched the lights off and followed me back to the foyer. “Uh-uh, Track. First things first. Tomorrow you pee in a cup and get your LAPD badge back.”

We locked the house, replaced the yellow crime scene tape. The air was tainted with a hint of humidity and the scent of jacaranda blooms. A handful of pale stars dotted the sky, the glow of downtown beneath them like a disoriented dawn. A broken streetlight strobed from farther down the street. The Latino music persisted. Yo sufrí mucho por ti, mi corazon…
Satish unlocked the car and slid behind the wheel. “Union mandated drug test. Your leave of absence from the department was longer than ninety days. Welcome back to regulations, Detective Presius.”

I made a face.

“Look at it this way. Whoever handles those cups has it way worse than you.” He started the engine and backed out of the driveway. “Shit happens, Track. Never forget that.”

I rolled down the window and let cool air blow in my face. The freeway droned in the distance, as another night descended upon L.A. Another murder, another killer on the loose. 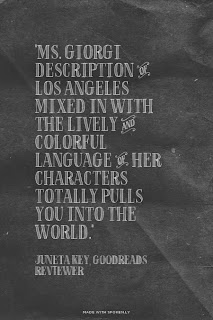 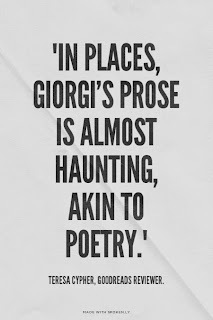 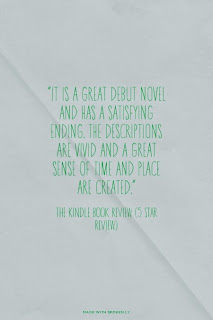 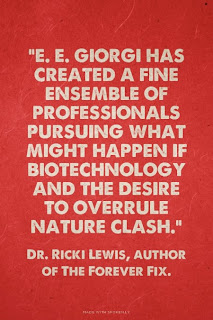 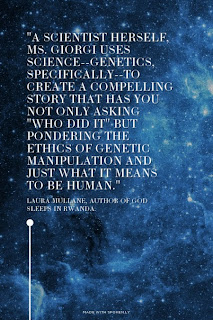 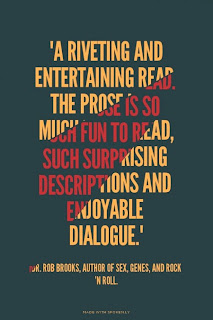 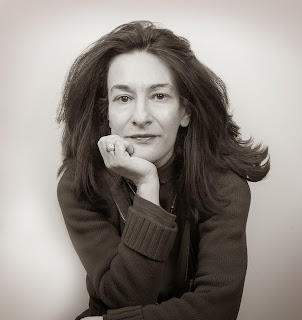 E.E. Giorgi is a scientist, a writer, and a photographer. She spends her days analyzing genetic data, her evenings chasing sunsets, and her nights pretending she’s somebody else. On her blog, E.E. discusses science for the inquiring mind, especially the kind that sparks fantastic premises and engaging stories. Her detective thriller CHIMERAS, a hard-boiled police procedural with a genetic twist, is now available on Amazon.

Stop By These Other Great Sites: