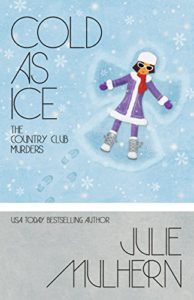 Ellison Russell’s life resembles a rollercoaster ride. And rollercoasters make her ill. Her daughter Grace has a crush on a boy Ellison doesn’t trust and she’s taken to hosting wild parties when Ellison goes out for the evening. Worse, the bank which represents Grace’s inheritance from her father may be in trouble.

When a meeting with the chef at the country club leads to the discovery of a body, Ellison can’t afford cold feet. She must save the bank, find the killer, and convince Grace (and herself) that powerful women don’t need men to rescue them.

Check out all the books in the Country Club Murders Series!

There is a scene in Cold as Ice in which Ellison hurries home to find a raging party at her house. Oh, those teenagers and their not-yet-fully-developed frontal lobes. When I was a teenager, I attended parties like the one Grace, Ellison’s daughter, hosts. Parties that looked like a scene from a John Hughes’ movie come to life.

Attending such a party as a parent is a completely different experience. Especially when it’s happening at your home. Do you remember the appalled look on Andie’s (Molly Ringwald’s) face as she walks through Steff’s party in Pretty in Pink? Think that look on steroids. Even as I valiantly (I-should-have-ceded-defeat) tried to regain control of my house, I was thinking—this has to be in a book, Grace is going to have a party.

That thought became more firmly fixed the next morning when I found a pair of boys’ pants in my family room.

“How?” I asked my daughter. “How does someone leave a party without their pants? Don’t they realize they’re missing a vital part of their ensemble?”

She rolled her eyes. “He changed into shorts.”

Because we all bring alternate outfits with us to parties.

An excerpt from Cold as Ice follows. Hope you enjoy it!

Anarchy slowed the car to a crawl. I looked for the house flooded with lights and people.

I was hosting an enormous party.

And if the police cars and scattering teenagers and empty beer cans littering my lawn were any indication, the party was a good one.

Anarchy snorted and pulled into the drive, parking at the bottom. The rest of the driveway was already filled with haphazardly parked vehicles.

I didn’t wait for Anarchy to open my door. I was out of the car before he’d even turned off the ignition. I charged up the drive in full Mother mode. Four friends to spend the night? Where was Grace? When I was done with her she’d wish for Mother.

“Ma’am?” A uniformed officer actually thought he could stop me.

He wisely got out of my way.

I pushed on the front door. It didn’t budge.

Apparently the teenagers who remained in my house had decided their best course of action was to lock the door and wait out the police.

Too bad for the geniuses behind the door, I had a key. I inserted the gold Schlage and turned. The door swung open onto a world gone mad.

A mob of children holding beer cans stared at me with horrified expressions on their young faces. “Smokin’ in the Boys’ Room” blared from the stereo in the family room, loud enough for me to feel the bass rumble through the floor. The boys’ room wasn’t the only place people were smoking. Far too many children held cigarettes. My house smelled like a dive bar.

I stepped inside. “Where. Is. Grace?”

No one said a word.

“Out.” I pointed toward the front yard.

I let my gaze travel. “I know who you are.” I’d known most of the kids in my front hall since they learned to toddle. “If you’re not out of here in one minute, I’ll call your fathers.” I paused, slowing my voice to deadly intent. “And send them bills for this mess.”

The little delinquents flew out the door.

I felt a presence at my back and glanced over my shoulder. Anarchy stood behind me. “Wow.” His voice was mild.

Wow? Maybe that was an appropriate response for a homicide detective who was accustomed to witnessing gruesome crime scenes, but as the unexpected hostess for this party, the words scrolling through my brain were much stronger. My fingers curved into talons and I stalked forward. At least thirty teenagers still lingered in the living room. And why wouldn’t they? That was where most of the liquor was—had been. A group of five or six kids were spinning an empty bottle of eighteen-year-old Glenfiddich. The bottle had not been empty when I left.

They saw me and leapt from the floor.

“Out.” I pointed toward the door.

I strode toward the kitchen. The island was cluttered with empty beer cans and glasses doing double duty as ashtrays. Three boys perused the contents of my refrigerator, a fourth pumped a keg.

The growl in my throat was visceral.

“Ellison, keep everything in perspective. No one’s dead.”

“Yet.” Maybe not the smartest thing to say to a homicide detective. 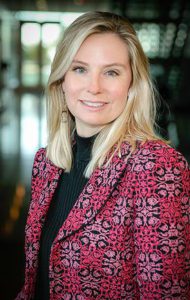 Julie Mulhern is the USA Today bestselling author of The Country Club Murders. She is a Kansas City native who grew up on a steady diet of Agatha Christie. She spends her spare time whipping up gourmet meals for her family, working out at the gym and finding new ways to keep her house spotlessly clean–and she’s got an active imagination. Truth is–she’s an expert at calling for take-out, she grumbles about walking the dog and the dust bunnies under the bed have grown into dust lions.