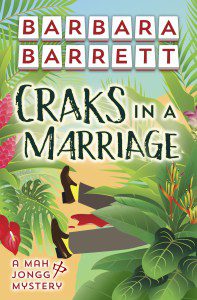 Craks in a Marriage by Barbara Barrett
Mah Jongg Mysteries #1

When Sydney Bonner overhears a fellow mah jongg player arguing on the phone with her husband, she realizes the couple’s “perfect marriage” isn’t all it appears to be. A few days later, the husband is found dead, his head bashed in. Fearing she’ll be considered the most likely suspect, the widow prevails upon Sydney and her three friends—Marianne, Kat and Micki—to find out who really killed him.

Though none of these four fun-loving, take-charge retirees has any training as detectives, the women agree to launch a secret investigation. As they dig under the happy veneer of their community’s social life, they find more than enough suspects, from shady ladies to resentful golf buddies, to keep them looking over their shoulders.

Could the murderer be lurking among the talent in a chaotic production put on by Sydney’s husband, who will do anything to keep busy in retirement? Could the sheriff, who may have more than a professional interest in chanteuse Kat, end up pinning the crime on the women instead? Each discovery during their investigations and their weekly mah jongg game keeps them running as they close in on the killer—but the killer may also be closing in on them.

Craks in a Marriage by Barbara Barrett is the first book in the Mah Jongg Mysteries series. I’ve played mah jongg on the computer, but not in real life. I really enjoyed this unique aspect of this cozy mystery. It was fun to learn the ins and outs of mah jongg and life in Serendipity Springs, Florida. I liked that the characters were retirees. It put a different spin on the story and I like reading about characters that are different than me.

Our amateur sleuths, Sydney, Marianne, Kat and Micki, find themselves helping a fellow mah jongg player, Olivia, after her husband is found murdered. They each bring a different set of skills to the investigation and work well together to find out whodunnit. The characters and setting were brought to life by Ms. Barrett and made this an exciting mystery from start to finish. I am looking forward to visiting Serendipity Springs again. 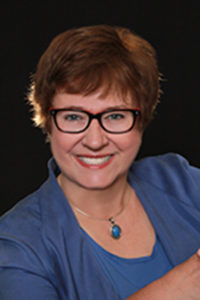 Barbara Barrett started reading mysteries when she was pregnant with her first child to keep her mind off things like her changing body and food cravings. When she’d devoured as many Agatha Christies as she could find, she branched out to English village cozies and Ellery Queen.

Later, to avoid a midlife crisis, she began writing fiction at night when she wasn’t at her day job as a human resources analyst for Iowa State Government. After releasing eleven full-length romance novels and one novella, she has returned to the cozy mystery genre, using one of her retirement pastimes, the game of mah jongg, as her inspiration. Not only has it been a great social outlet, it has also helped keep her mind active when not writing.

Craks in a Marriage, the first book in her “Mah Jongg Mystery” series, features four friends who seek the murderer of another mah jongg player’s husband before she is charged. None of the four is based on an actual person. Each is an amalgamation of several mah jongg friends with a lot of Barbara’s imagination thrown in for good measure. The four will continue to appear in future books in the series.

Anticipating the day when she would write her first mystery, she has been a member of the Mystery/Romantic Suspense chapter of Romance Writers of America for over a decade. She credits them with helping her hone her craft.

Barbara is married to a man she met her senior year of college. They have two grown children and eight grandchildren.

When not in front of her laptop creating her next story, she plays Mah Jongg, knits, and enjoys lunches with friends.

Thanks to the author, I am able to give away one ebook copy of Craks in a Marriage. For your chance to win, please leave a relevant comment on this post. For additional entries, you can share this post to your social media accounts using the share buttons at the top or bottom of the post. Be sure to leave a comment and let me know where you shared! You can share each day for additional entries. This giveaway will close on 3/16/2018 at 11:59 PM EST and a winner will be randomly selected from all eligible entries. Good luck!