To post this Blitz and add your Social Media to the Rafflecopter,
email us at PrismBookTours(at)gmail.com with “A Dangerous Madness” in the subject line! 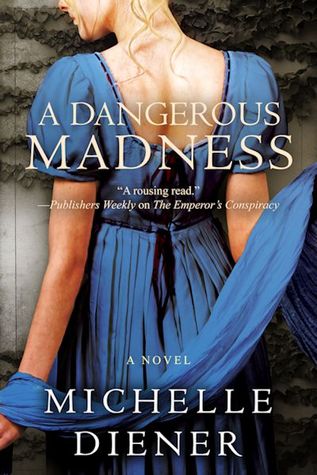 A Dangerous Madness
by Michelle Diener
Adult Historical
May 19th 2014

The Duke of Wittaker has been living a lie…

He’s been spying on the dissolute, discontented noblemen of the ton, pretending to share their views. Now he’s ready to step out of the shadows and start living a real life…but when the prime minister of England is assassinated, he’s asked to go back to being the rake-hell duke everyone believes he still is to find out more.

Miss Phoebe Hillier has been living a lie, too…

All her life she’s played by society’s rules, hiding her fierce intelligence and love of life behind a docile and decorous mask. All it’s gotten her is jilted by her betrothed, a man she thought a fool, though a harmless one. But when she discovers her former fiancé was involved in the plot against the prime minister, and that he’s been murdered, she realizes he wasn’t so harmless after all.

And now the killers have set their sights on her…

The only man who can help her is the Duke of Wittaker–a man she knows she shouldn’t trust. And she soon realizes he’s hiding behind a mask as careful as her own. As the clock ticks down to the assassin’s trial, the pair scramble to uncover the real conspiracy behind the prime minister’s death. And as the pressure and the danger mounts, Phoebe and Wittaker shed their disguises, layer by layer, to discover something more precious than either imagined–something that could last forever. Unless the conspirators desperate to hide their tracks get to them first.

It just so happens that In Defense of the Queen, one of my Tudor-set historicals, is on special offer at the moment on Amazon, down to $0.99 from $4.99. The offer ends on May 24th, so if you like historicals with twists, turns and a lot of suspense, be sure to grab a copy.

I am so excited that my historical novel, A Dangerous Madness, releases today. A Dangerous Madness is set during the Regency period in London, and the plot revolves around the assassination of the British prime minister, Spencer Perceval.

A Dangerous Madness stands alone, but it is also connected to two other of my historical novels, The Emperor’s Conspiracy and Banquet of Lies. The fun part of connecting the novels for me was to revisit characters I love from the previous two books (which are also connected to each other) but introducing those characters so that a reader of A Dangerous Madness doesn’t have to have read the other two books to understand them. The characters have to stand alone, as much as the books do. But for those readers who have read either one or both of the previous books, they’ll see those characters again, and learn a little about what has happened to them since the last book.

I’ve had so many readers contact me and comment on how much they enjoyed catching a glimpse of one or other of their favorite characters, which I really love. And quite a few people who read Banquet of Lies went back to read The Emperor’s Conspiracy, and told me they found it equally satisfying, so readers don’t have to read the books in any particular order.

In this way, connected books are more versatile than a series, because most people are hesitant to read a series out of order, and I totally understand that. I also love that so many people wrote to me after Banquet of Lies, asking if the Duke of Wittaker would get his own story. It was very satisfying to tell them I had started working on it straight after I finished Banquet of Lies. 🙂

From the beginning of Banquet of Lies, the Duke of Wittaker is mentioned by various characters again and again, although readers only ‘meet’ him near the very end. But when he did arrive on the scene, he made a real impact. I wrote and rewrote the scenes with him in them, because he really shone as a character and I wanted to do him justice. I loved that readers felt the same way, and those who read Banquet of Lies and have been waiting for their Duke of Wittaker fix, I hope they enjoy A Dangerous Madness as much as I enjoyed writing it.

Grand Prize: Print copies of The Emperor’s Conspiracy, Banquet of Lies, and A Dangerous Madness
5 Print or Kindle copies (winner’s choice) of A Dangerous Madness
Both giveaway are open internationally.
May 19th – 26th
See Rafflecopter for restrictions.