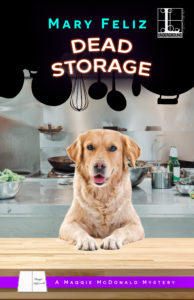 As a professional organizer, Maggie McDonald brings order to messy situations. But when a good friend becomes a murder suspect, surviving the chaos is one tall task…

Despite a looming deadline, Maggie thinks she has what it takes to help friends Jason and Stephen unclutter their large Victorian in time for its scheduled renovation. But before she can fill a single bin with unused junk, Jason leaves for Texas on an emergency business trip, Stephen’s injured mastiff limps home—and Stephen himself lands in jail for murder. Someone killed the owner of a local Chinese restaurant and stuffed him in the freezer. Stephen, caught at the crime scene covered in blood, is the number one suspect. Now Maggie must devise a strategy to sort through secrets and set him free—before she’s tossed into permanent storage next…

“Stephen?” I said. “I’m here at your house for our meeting and to get started on the front room. I can begin without you, but I’m a little worried. Can you please call me and let me know what’s up and when you’ll get here? If you’re in a bind and want to reschedule, that’s fine. Just let me know you’re okay.”

I heard the tension in my voice. I was worried. But the best cure for worry was action, so I let Belle into the backyard through a side gate and started unpacking the tools of my trade from my trunk.

I unfolded a collapsible wagon and filled it with portable garment racks for sorting clothing. I added a dozen flattened cardboard boxes for storing anything we decided to keep and move. On top of the pile I added my newest find: a stack of flat-bottomed paper bags generally used in towns that required them for yard clippings. I’d marked them with an assortment of color-coded stick-on labels: garbage, recycling, and donations. The flat bottoms made it easy to set the bags up anywhere and their double-walled sides were stiff enough that the bags stayed open, making loading easy. Anything we wanted to keep would be put on a garment rack or in a box. I asked my clients to touch everything they needed to make decisions about, but to handle each item as few times as possible.

It would be a bit tricky to make decisions about Jason’s belongings in his absence, particularly since his team had been asked to avoid making phone calls from the disaster area. Networks were overloaded by public safety officials making emergency calls and hundreds of thousands of people were checking on loved ones. Jason’s emergency team was intended to help the situation rather than contribute to the problem. Texts were allowed, but Jason had asked us to avoid calling and told us not to worry if we didn’t hear from him. He was going to be very busy, working long hard days to help the people of Texas restore their lives as quickly as possible.

We’d agreed to temporarily store Jason’s belongings in the garage for him to sort through after he returned. Part of my job was to organize those items in a way that would streamline the decision-making process.

I rattled the wagon up the front walk and unloaded it so I could get everything up the steep porch steps. If Stephen were here, he could have carried the wagon for me. I glanced up and down the street again, searching for man, dog, or car. Where were they?

I’d moved the contents of the first wagonload up the steps and arranged it neatly on the porch when I stopped again to glance at my phone for messages. Stephen was now more than a half hour late. Momentum was important to clients who were doing the hard work of sorting through years of belongings. Every time they hit a snag, they were tempted to stop, which made starting again twice as difficult. That was part of my job as a professional organizer: keeping things moving forward and smoothing out the inevitable frustrations.

Belle barked from the backyard. It wasn’t a bark I recognized but she sounded alarmed and concerned. She scratched at the gate and barked again, louder this time. Something was wrong.

“What’s the matter, girl?” I bustled down the steps and around the corner of the porch to the back gate. “Are you lonely? I’ve got the key, but I’m not sure I want to go inside without Stephen and Jason here. It’s not an emergency, after all.”

Belle barked again with a sharp tone that sounded remarkably like, “Is too!”

I sighed. I’d call Stephen one more time before giving up and going home to work on some dreaded paperwork of my own. But then I heard something and looked up. I squinted. “Munchkin?”

Belle barked again and I took a few steps toward the distant shape slowly approaching on the sidewalk. It moved somewhat, but not quite, like the big mastiff. But it couldn’t be him, could it? If it was, where was Stephen? I could count on one hand the number of times I’d seen one of them without the other.

I broke into a run as soon as my brain sorted out the clues. It was Munchkin, but he was limping badly, walking stiffly, and his head drooped. I winced, empathizing with his pain.

I sank to my knees as I reached him, tempted to scoop the dog in my arms to comfort both of us.

He growled quietly to warn me off, then whimpered, looking up with an expression of pain and a brow that wrinkled more than usual. He whimpered again as he sat, leaning heavily to the right to take weight off his left leg and hip..

“I’m no veterinarian, but something is very wrong with that leg, Munchkin. You poor thing.” His fur was dirty and matted with mud, leaves, and an alarming amount of blood. Close up, I could see a deep laceration on his bad leg. Several clumps of hair seeped with the bright crimson of an actively bleeding wound. A dotted line of blood marked the sidewalk behind him.

I looked at the neighbors’ homes and listened for sounds that might tell me someone was home…a car starting up, a lawnmower, a dryer thumping with damp tennis shoes or clanking as a zipper went round and round. It was dead quiet. 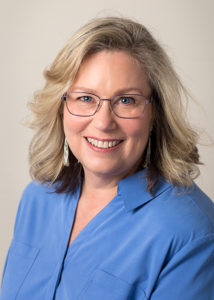 Mary Feliz writes the Maggie McDonald Mysteries featuring a Silicon Valley professional organizer and her sidekick golden retriever. She’s worked for Fortune 500 firms and mom and pop enterprises, competed in whale boat races and done synchronized swimming. She attends organizing conferences in her character’s stead, but Maggie’s skills leave her in the dust.

For your chance to win a paperback copy of Dead Storage by Mary Feliz, please leave a comment on this post and then fill out the Google form below to submit your entry. This contest is open from 11/11/17 through 11:59 PM EST on 11/21/17. One winner will receive a paperback copy of Dead Storage. Giveaway is open to US residents only. Contest is void where prohibited and is sponsored solely by the author. Winner will be randomly selected from all eligible entries and emailed. Winner must respond to notification email within 24 hours or a new winner will be selected. Good luck!!

If the form above does not load, please click here to enter to win.