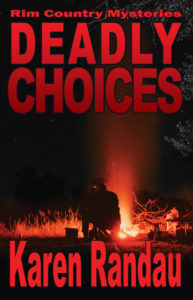 An elderly woman with an arrow in her chest. A murdered journalist. A decades-old cover-up. In Deadly Choices, Rita and Cliff Avery team up again to solve a spate of murders in their picturesque Arizona mountain town of Rim Vista. Rita’s mother Willow delivers gun-wrenching news while falling for the man who could be responsible for four deaths. And Rita must escape a string of life-threatening predicaments thrown at her by an assailant willing to do anything to scare Cliff off the case.

Rim Country Mysteries: Intrigue, Action, and Twists With a Dash of Romance

Rita Avery has had her share of heartbreak, but when she decides to find the mother she hasn’t seen in twenty-five years, she’s in for a surprise that feels like taking a stun gun to the gut.

Born to two 1960s vegetarian hippies, Rita marries immediately out of high school and legally changes her name from Lovely Rita to Rita Anne in hopes of building a more conventional life. It seems she’s succeeded until a troubled young man blows her husband’s brains into her face in a movie theater shooting that takes the lives of fourteen people in small-town Arizona. Rita is left not knowing who to trust and questioning everything she thought she knew about her Marine husband and their marriage.

When she dares to love again, Rita and her new husband, Detective Cliff Avery, honeymoon in his ancestral home of Scotland. Cliff plans to meet his paternal grandfather for the first time. As they check into a luxury suite, a desk clerk dies in front of them, the victim of a poisoning meant for Cliff…one of many attempts to keep Cliff from inheriting his grandfather’s fortune.

And now, while wilderness camping with Rita’s mother, an elderly woman stumbles into the campsite with an arrow in her chest, claiming it just fell out of the sky. Not only must Rita at last face the past she fled and wanted to forget, but she’s forced to fight for her life as the murder investigation points to a dear family friend her mother is dating.

Rita’s character arc in the Rim Country Mysteries takes her from a naïve and shallow home maker to a caring, independent, strong-willed woman with good instincts and the ability to fight or shoot her way through the obstacles that life or any villain throws at her. 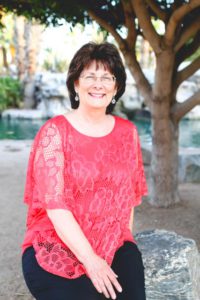 Karen Randau works full-time as a content marketer for an international humanitarian aid organization that works in developing countries.

Her Rim Country Mysteries series currently has three novels: DEADLY DECEIT, about a woman whose husband was one of fourteen people killed in a movie theater shooting; DEADLY INHERITANCE, about the same women who has remarried and gets locked in a Viking burial cave with a lit stick of dynamite while honeymooning in Scotland; and DEADLY CHOICES, about the same woman finding the mother she hasn’t seen in twenty-five years only to discover a devastating secret.

Karen enjoys spending time with her grown children, playing with her dog, and hiking with her husband.