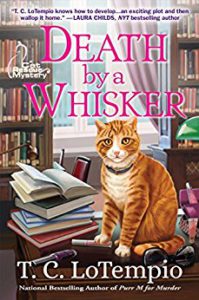 Getting used to life back home in Deer Park, North Carolina, Sydney McCall and her right-hand tabby, Toby, are helping her sister Kat run the local animal shelter. Syd and Kat are all excited about the prospect of the shelter’s newest fundraiser: shopping channel queen Ulla Townsend. Shelter admin Maggie Shayne vehemently refuses to have anything to do with the woman, but the fundraiser ensues as planned. That is, until Ulla turns up dead in the middle of the event.

The cause of death is determined to be an allergic reaction, but Syd and Toby are sniffing out something fishy. When Syd met Ulla, it was clear she was distasteful and rude. And right before the event, Syd spotted some behind-the-scenes drama between Ulla and her manager. As they begin to investigate, they realize there is no shortage of suspects, and Maggie is at the top of the list.

Now Syd and Toby must claw their way to the truth before everything goes paws up at their animal shelter in Death by a Whisker by national bestselling author T. C. LoTempio. 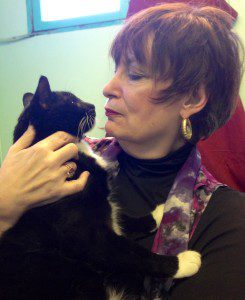 While Toni Lotempio does not commit – or solve – murders in real life, she has no trouble doing it on paper. Her lifelong love of mysteries began early on when she was introduced to her first Nancy Drew mystery at age 10 – The Secret in the Old Attic. She (and ROCCO, albeit he’s uncredited) pen the Nick and Nora mystery series from Berkley Prime Crime – the first volume, MEOW IF ITS MURDER, debuted Dec. 2, 2014. Followed by #2, CLAWS FOR ALARM. #3, CRIME AND CATNIP, was released in December. She, Rocco and Maxx make their home in Clifton, New Jersey, just twenty minutes from the Big Apple – New York. Catch up with them at www.tclotempio.net and www.catsbooksmorecats.blogspot.com

Where to find them: