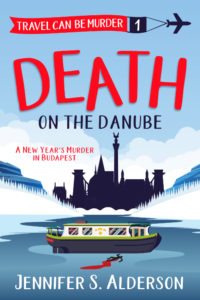 Death on the Danube by Jennifer S. Alderson
Travel Can Be Murder Book 1

Who knew a New Year’s trip to Budapest could be so deadly? The tour must go on – even with a killer in their midst…

Recent divorcee Lana Hansen needs a break. Her luck has run sour for going on a decade, ever since she got fired from her favorite job as an investigative reporter. When her fresh start in Seattle doesn’t work out as planned, Lana ends up unemployed and penniless on Christmas Eve.

Dotty Thompson, her landlord and the owner of Wanderlust Tours, is also in a tight spot after one of her tour guides ends up in the hospital, leaving her a guide short on Christmas Day.

When Dotty offers her a job leading the tour group through Budapest, Hungary, Lana jumps at the chance. It’s the perfect way to ring in the new year and pay her rent!

What starts off as the adventure of a lifetime quickly turns into a nightmare when Carl, her fellow tour guide, is found floating in the Danube River. Was it murder or accidental death? Suspects abound when Lana discovers almost everyone on the tour had a bone to pick with Carl.

But Dotty insists the tour must go on, so Lana finds herself trapped with nine murder suspects. When another guest turns up dead, Lana has to figure out who the killer is before she too ends up floating in the Danube…

Introducing Lana Hansen, tour guide, reluctant amateur sleuth, and star of the Travel Can Be Murder Cozy Mystery Series. Join Lana as she leads tourists and readers to fascinating cities around the globe on intriguing adventures that, unfortunately for Lana, often turn deadly.

Where Do Characters Come From?

A well-described character is as familiar and relatable as a good friend. You know about their interests, families, personalities, and work experiences. As an author, it is always a challenge to create unique individuals that are also people readers want to spend time with!

So how did I go about creating the characters in my new Travel Can Be Murder Cozy Mystery series?

Most people have a variety of hobbies, interest, and work experiences, which means my characters need those, too!

When developing this new series, I started with what I enjoy doing and learning about. Travel is an important part of my life, so I decided to make it a central component to my stories. Most of my experiences are of backpacking solo through several countries during one long trip. However, I wanted these cozy mysteries to be set in one city so I decided to have the travel agency focused on older, wealthier clients.

I knew that Lana Hansen, the star of this series, fell into the job as tour guide. So I needed one of the characters to be put in a position where she had to hire Lana. Dotty Thompson, Lana’s landlord and good friend, is also the owner of Wanderlust Tours. When one of Dotty’s guides get sick during Christmas, Lana is the only one she can call on for help.

Once I knew Lana would work for Dotty as a tour guide, I had to decide what kind of tours they would be.

I contemplated backpacker tours, senior-only tours, cooking tours, RV tours, bus tours, and many others. Ultimately I decided to make them luxury tours to European destinations. The majority of their clientele would be wealthy Seattleites long on money and short on time.

There was only one problem. I am an avid traveler, but my experiences are limited to solo backpacking adventures through multiple countries visited during one trip. I have been on many day tours led by locals, but never on the kind of luxury tour I describe in my cozy mysteries! Luckily, my mother has been on several and has shared so many photos and stories about the guides, hotels, and fellow passengers, I feel as if I have! I was also lucky enough to spend a day with her travel group when they visited the Netherlands. That was a fun and educational experience, for sure. Little did I know that I would later use that day out as a basis for my stories.

Many of Lana’s interests – and those of her friends – mirror my own. Not only does Lana enjoy doing the things I enjoy doing, such as kayaking, but she also does things I wanted to learn more about, such as magic. The characters’ interests ended up being a combination of what I knew and what I wanted to know.

There are several similarities between Lana Hansen’s background and my own. Like Lana, I lived in the Fremont neighborhood of Seattle for many years, was a volunteer kayak instructor with the Mountaineers, and had a wonderful black cat – though mine was a girl named Zelda, not a boy named Seymour. I even worked as an investigative reporter for a short time. Thankfully I was not fired for libel, as Lana was!

Other aspects of Lana’s friends’ backgrounds are things I wanted to learn more about, such as magic and cooking. I have always been in awe of those who can cook intricate dishes without burning everything. While researching Book 2 –Death by Baguette– I watched many videos and shows about cooking and tried to make several dishes at home. Though I wasn’t successful, I did enjoy watching professional chefs at work.

I love magic and am in awe of professional magicians. Two of my favorites acts are Hans Klok and Penn & Teller – both of which I have gotten to see perform live. I didn’t know the first thing about how they performed their tricks before starting this series, and frankly, I still don’t understand how they do it. But that’s all part of the illusion! Shows featuring magicians explaining how a trick is performed were extremely helpful when writing about Lana’s ex-husband, a magician called The Great Ronaldo.

Lana’s best friend Willow owns a yoga studio in Fremont, which is also where she and Lana meet. Yoga and Pilates are something I used to do regularly and having them be part of these books motivated me to start again.

Dotty Thompson is not only the owner of Wanderlust Tours, she is also creating two new lines of clothing for our four-footer friends in this series – Doggone Gorgeous and Puurfect Fit Clothing for dogs and cats fascinates me. I always wonder how pet owners get them onto their four-footers! None of mine would allow it, but I do love seeing the adorable variety of outfits they make for pets these days.

So in a nutshell, this is how Lana Hansen and her good friends came to be!

Thanks for offering me a chance to share my new Travel Can Be Murder series with your readers.

If you enjoy heartwarming stories about friendship, travel, and celebrating new experiences, I invite you to follow along on Lana Hansen’s journeys! The first book in the Travel Can Be Murder Cozy Mystery series – Death on the Danube – is about a New Year’s trip to Budapest and will be released on November 28, 2019. The next three books in the series – Death by Baguette: A Valentine’s Murder in Paris, Death by Windmill: A Mother’s Day Murder in Amsterdam, and Death by Bagpipes: A Summer Murder in Edinburgh – will be released in 2020. 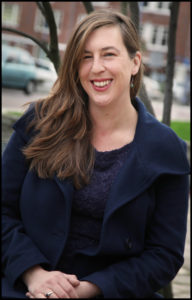 Jennifer S. Alderson was born in San Francisco, raised in Seattle, and currently lives in Amsterdam. After traveling extensively around Asia, Oceania, and Central America, she moved to Darwin, Australia, before settling in the Netherlands. Her background in journalism, multimedia development, and art history enriches her novels. When not writing, she can be found in a museum, biking around Amsterdam, or enjoying a coffee along the canal while planning her next research trip.