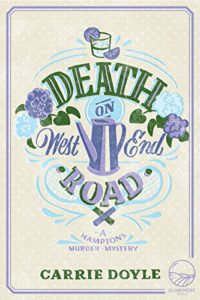 An unsolved crime is something that Hamptons innkeeper and sleuth Antonia Bingham just can’t resist. Despite a busy high-season schedule and an inn booked to capacity, Antonia has agreed to investigate a cold case in her beloved adopted hometown, East Hampton, NY: the killing of Susie Whitaker, whose brutal 1990 slaying on a tennis court in the poshest part of town was never solved.

And the person who has hired Antonia? Prime suspect Pauline Framingham, a manipulative pharmaceutical heiress from a powerful family. As Antonia attempts to unravel the mysteries of the past she unearths even darker secrets and ultimately wonders if it would have been best to let sleeping dogs lie. To make matters worse, past acquaintances and love interests reappear in the Hamptons, disrupting Antonia’s world and causing her to scurry to the fridge for comfort.

Join Antonia for this gripping new installment in the Hamptons Murder Mystery series from Carrie Doyle!

Confessions of a Vegetarian

When I was in second grade in the early 1980s (okay, 1980, ahem) I went on a class trip to Van Cortlandt Manor, a historic house in upstate New York where you can experience the domestic life of a patriot family living at the time of the American Revolution. That all seems pretty reasonable. But actually that class trip was the catalyst for sending my eight-year old self into a lifetime of eschewing meat and poultry. I always claim that watching a pig slaughtered was what sent me into a tailspin, but I think I imagined that part. It was actually the smell of the place that repulsed me: the smoking meat hanging in strips; the freshly killed chickens and their feed; the pigs roaming in the mud. I can still smell it to this day.

Let me back up. I grew up in the center of New York City where the only nature I saw out my window was in Central Park. It was the eighties so the food trend was frozen vegetables from Stouffer’s along with a slab of meat or a breast of chicken. We didn’t have salads (“so California”) we had thawed lima beans with corn kernels. I couldn’t imagine the farms where my food came from—in my mind, our Lucky Charms and Hawaiian Punch was produced at Patrick Murphy, the local grocery store that delivered. We didn’t really ever eat fish, and the only fishing trip was when my father rented a boat and we went off the coast of Montauk and I threw up thirteen times so we turned around without catching a bite. I clearly didn’t experience the whole ‘farm to table’ movement back then.

I was always a picky eater. When I was three I went to my friend Steven Pettibone’s house (real name) and his mother served us both cheeseburgers. He quickly ate his, while I only had two miniscule bites. We got up to leave the table and she wouldn’t let me leave until I ate everything on my plate. I sat there for two hours and would never go to another play date unaccompanied. I think back on that and wonder if I always had an aversion to meat? Although I am of 100% Irish blood, that whole meat and potatoes thing has never been my jam. I much prefer a Mediterranean diet—pasta with tomato sauce; lentils; red wine—all of which inflames my rosacea and makes me bloated.

That said, although I don’t like meat or poultry and haven’t indulged in over thirty (okay, thirty-five) years, I still believe strongly in the food chain. In fact, in a way, I am a self-hating vegetarian. Instead of eating meat, I eat bread. It’s my favorite food. Instead of chicken on salad, I have croutons. You see what I mean? Not good. The thing is, I am a foodie through and through. I love reading food magazines and the latest cookbooks and Top Chef is my favorite show. I cook meat for my family, I just don’t taste it. (They say it’s good.)

Antonia Bingham, the protagonist in my Hamptons Murder Mystery Series, is a gourmet chef and foodie and I live vicariously through her. I write about her craving for bacon or roast chicken and how she craves a juicy steak. Some readers are shocked when they learn I don’t eat meat. “But you write about it so well! My mouth waters!” they exclaim. Mine too! I can write about it, but not indulge in it. When they shake their heads I tell them that I like to think I write well about murdering someone, but that’s also something I don’t indulge in. 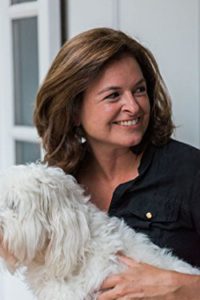 Carrie Doyle was the founding Editor-in-Chief of the Russian edition of Marie Claire Magazine. She is currently a Contributing Editor of Hamptons Magazine and has written extensively for Harper’s Bazaar, Town & Country and has also written for Women’s Health and Avenue on the Beach. With Jill Kargman, Carrie co-wrote the film Intern (which premiered at the Sundance Film Festival in 1999), as well as several screenplays sold to Showtime, Paramount Pictures, Nickelodeon Films and the Oxygen Network. Carrie and Jill co-wrote five books together, including three teen books for HarperCollins and two bestselling women’s fiction books, The Right Address and Wolves in Chic Clothing (Broadway Books). Carrie also penned the popular novel The Infidelity Pact (Broadway Books). Carrie lives in New York City with her husband and two children and is currently at work on an animated series for broadcast as well as her new series, the Hamptons Murder Mysteries.