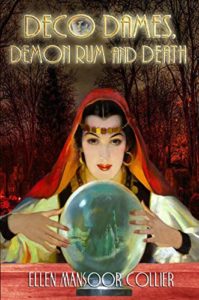 When young Galveston Gazette society reporter Jazz Cross hears rumors of grave robbers at the Broadway Cemetery, she and photographer Nathan Blaine investigate, hoping to land a scoop. The newshawks witness meetings held by clandestine gangs and enlist the help of her beau, Prohibition Agent James Burton, who attempts to catch the elusive culprits red-handed.

Meanwhile, the supernatural craze takes Galveston by storm, and Jazz is assigned to profile the society set’s favorite fortune teller, Madame Farushka. Sightings of a ghost bride haunting the Hotel Galvez intrigue Jazz, who sets up a Ouija board reading and séance with the spiritualist. Did the bride-to-be drown herself—or was she murdered?

Luckily, Sammy Cook, her black-sheep half-brother, has escaped the Downtown Gang and now acts as the maître d’ for the Hollywood Dinner Club, owned by rival Beach Gang leaders. During a booze bust, the Downtown Gang’s mob boss, Johnny Jack Nounes, is caught and Jazz worries: will Sammy be forced to testify against his former boss? Worse, when a mystery man turns up dead, Sammy is framed for murder and Jazz must solve both murders and help clear Sammy’s name.

As the turf war between rival gangs rages on, Jazz relies on her wits and moxie to rescue her brother and her friends before the Downtown Gang exacts its revenge.

“Eat, drink and be merry” dictated the mood during the Shake, Rattle and Pour era of the Roaring Twenties—never mind Prohibition. To the rebellious “Lost Generation” of the Jazz Age, the 18th Amendment passed in 1919 (aka the Volstead Act) made liquor that much more appealing, not to mention attainable.

Thanks to opportunistic bootleggers, moonshiners, and Al Capone-clones, gin mills and bars flowed with bathtub booze and home-brewed hooch. Originally created by the ancient Egyptians, cocktails not only helped to make bootleg liquor more palatable for public consumption, but stretched out a meager supply. Outrageous names added to the cocktail craze: Between the Sheets, Side Car, Fox Trot, Zanzibar, Clover Club, Palm Beach, for starters.

Contraband cocktails served as the main ice-breakers, and often the raison d’etre, of spirited soirees during the not-so-dry decade. Savvy hostesses knew that mixed drinks helped loosen up the mixed company and, with a little help from her rum-running friends, her bar was always well-stocked for making whoopee. As Cole Porter would say, “Anything goes!”

Prohibition may have padlocked the doors of the saloons and bars, yet it paved the way for a more egalitarian watering hole. Only the right card and password granted you entreé, behind unmarked doors and peepholes, into the speakeasy’s secret sect. Daring sheiks and shebas could imbibe giggle-water until they were blotto—or until the next police raid.

Speakeasies sprouted like mushrooms—dark, damp and underground. By 1925, bon vivants could make the rounds at 100,000 blind pigs in New York City alone.

Besides bars and boudoirs, cocktails played a starring role in theatres and in Hollywood. Real-life flapper and film siren Joan Crawford drank, danced and smooched with abandon in Our Dancing Daughters (1928) and its sequel, Our Modern Maidens. Scandalous! And what’s a Noel Coward comedy, say, Private Lives or Blithe Spirit, without its ever-present props: the cocktail tray and “very dry martinis”?

Don’t forget everyone’s favorite aunt—Rosalind Russell in Auntie Mame. How could she throw an all-night soiree during the so-called Dry Decade without her bootlegger’s help?
Thirsty but resourceful quaffers most likely fashioned early shakers out of Mason jars, shell casings, or whatever container was at hand. Consider this frat joke published in Cornell’s Widow during the 1920s: “Do you fellows wash your own clothes at the house?” “Heck, no.” “Well, what’s that washing machine for?” “That’s no washing machine. That’s our cocktail shaker.”

With the repeal of Prohibition in 1933, speakeasies came out of the closet, only to be reborn as chi-chi cafes and must-see and be seen nightclubs. Undaunted by the Depression, New York’s cafe society flitted from the Stork Club to El Morocco to 21. In 1935, the original Old Mister Boston De Luxe Official Bartender’s Guide was published, just in time to capitalize on this intoxicating industry.

During the 1930s, a new era of movie-making began, showcasing cocktail shakers as the au courant accessory of sophisticated Hollywood stars. These Art Deco artifacts may have their roots in Prohibition, but their popularity has spanned the decades, symbolizing carefree elegance and elan. During this Golden Age of glamour, Clark Gable and Myrna Loy were the King and Queen of Hollywood. Life was swell and swank while everyone drank, at least in the movies—and how! Depression? Who’s depressed?

Like the matineé idols and stars of the day, cocktails, and the requisite shakers, were considered de rigueur for the Smart Set. No hard liquor for these oh-so-chic creatures of yesteryear. Recall Nick and Nora Charles exchanging witty reparteé in The Thin Man movies as they sipped dry martinis—what else? Witness Ginger Rogers and Fred Astaire twirling to swing bands under a mirrored ball in a glittering 1930s ballroom. Talk about putting on the Ritz!

Today cocktail shakers are no longer hidden behind closed doors, but are back in their rightful place at the bar. Elegant as an Erté etching, or just funky and fun, these colorful collectibles are meant to be displayed and handled—not just stored away like dusty museum pieces.

And on a cool night when you’re sipping a Dubonnet and the moon is a silver smile in the sky, you can pretend it’s 1925 all over again: Suddenly you’re snuggling with that special someone in the rumble seat of a new Packard, singing at the top of your lungs: “In the meantime, in between time: Ain’t we got fun?” 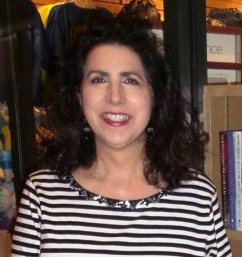 Ellen Mansoor Collier is a Houston-based freelance magazine writer and editor whose articles and essays have been published in a variety of national magazines. Several of her short stories have appeared in Woman’s World. During college summers, she worked as a reporter for a Houston community newspaper and as a cocktail waitress, both jobs providing background experience for her Jazz Age mysteries.

A flapper at heart, she’s worked as a magazine editor/writer, and in advertising and public relations (plus endured a hectic semester as a substitute teacher). She graduated from the University of Texas at Austin with a degree in Magazine Journalism and served on UTmost, the college magazine and as president of WICI (Women in Communications).

She lives in Houston with her husband and Chow mutts and visits Galveston whenever possible.

“When you grow up in Houston, Galveston becomes like a second home. I had no idea this sleepy beach town had such a wild and colorful past until I began doing research, and became fascinated by the legends and stories of the 1920s. Finally, I had to stop researching and start writing, trying to imagine a flapper’s life in Galveston during Prohibition.”