Pip Carlton is a devoted husband and a highly respected pharmacist, cherished by his loyal customers. When his wife dies in her sleep, with no apparent cause, he is distraught. Comforted by his caring assistant, Pip ignores the rumors about Margaret’s death, relieved that the police seem to have moved on.

But Prosecutor Helen West refuses to believe that Margaret simply slipped into her final slumber. As she probes deeper into the affairs of the neighborhood, she uncovers a viper’s nest of twisted passion, jealous rage, and lethal addictions.

As a sudden act of violence erupts, shaking the community, one lone man, armed with strange love potions, prepares to murder again…

He checked the window, but the unbearable sobbing continued and suddenly the idea was fully formed, plucked out of cold storage into the stuffy heat. The window was shut. No ventilation, no moving air as he returned to bed and took her stiff little body in his arms.
‘Come on, sweetheart, there, there, there.’ She clutched him so hard he could feel her long nails digging into his shoulders. His sweating had stopped and his skin to her touch felt as cold as ice. 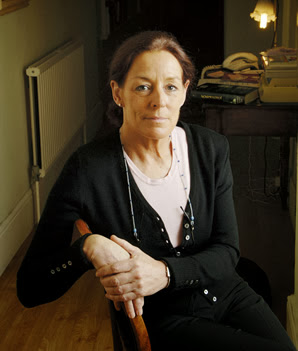 “I grew up in rural Derbyshire, but my adult life has been spent mostly in London, with long intervals in Norfolk and Deal, all inspiring places. I was educated mostly in convent schools; then studied English and went on to qualify as a solicitor, working for what is now the Crown Prosecution Service, thus learning a bit about murder at second hand. Years later, writing became the real vocation, although the law and its ramifications still haunt me and inform many of my novels.

I’m a novelist, short story writer for magazines and radio, sometime Radio 4 contributor, (Front Row, Quote Unquote, Night Waves,) and presenter of Tales from the Stave. When I’m not working (which is as often as possible), I can be found in the nearest junk/charity shop or auction, looking for the kind of paintings which enhance my life. Otherwise, with a bit of luck, I’m relaxing by the sea with a bottle of wine and a friend or two.”-Frances Fyfield

Deep Sleep by Frances Fyfield was an enjoyable mystery and thriller. I liked the characters and felt like this is one of the better story lines of her books that I’ve read. There were lots of different directions it felt like the story was going and kept me guessing til the end.