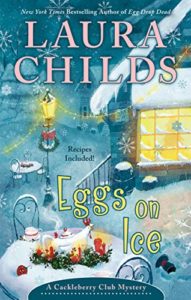 The Christmas season at the Cackleberry Club café is marred by murder in the latest book in the New York Times bestselling series.

Some say that casting crusty attorney Allen Sharpe as Scrooge in the Kindred Players production of “A Christmas Carol” is just playing to type. He’s not the most beloved man in town. In fact, you’d have a dickens of a time finding someone who liked him. Still it’s a shock when the Ghost of Christmas Past stabs him during the first rehearsal. Suzanne, co-owner of the Cackleberry Club café, Kindred’s favorite combination diner, craft store and bookshop, chases the murderer out of the building but loses him in the alley.

As the days pass the list of suspects grows longer. Is it the disgruntled partner? The former secretary whom Sharpe sexually harrassed? Or is it fellow owner of the Cackleberry Club, Toni’s almost ex-husband, Junior? The women of the Cackleberry Club are determined to find the killer before he can add another victim to his Christmas list.

Don’t you just love the holidays? I’m talking parties and get-togethers, eggnog sparked with brandy, and all those wonderful spiced holiday teas. You can literally savor the season with holiday teas that include cinnamon, peppermint, orange rind, nutmeg, and even chocolate.

With a little experimentation, you can even whip up your own holiday tea blend. Just start with a basic black loose leaf tea. Add some cinnamon sticks, star anise, or dried ginger. Venture into your local co-op or health food store and you’ll find ingredients like lemon verbena, lavender buds, and chamomile blossoms. You see, it’s easy to blend your very own proprietary tea!

As you can probably guess, tea features prominently in many of my cozy mysteries. And Eggs on Ice, my brand new Cackleberry Club Mystery offers a holiday tea party – as well as a holiday murder!

Here’s the gist of the story:

As the Kindred Players hold their first dress rehearsal for A Christmas Carol, a ghost wafts onstage and murders the star of the show. Shocked from her perch in the wings, Suzanne Dietz, co-owner of the Cackleberry Club, chases this spooky specter through the shadowy backstage of the theatre, but loses him when he escapes into a snowstorm. Feeling angry and threatened, Suzanne honchos her own shadow investigation and ends up juggling multiple suspects that include the mayor of small town Kindred, a strange visiting minister, a former female employee of the victim, and the play’s director. True to character, Suzanne also deals with holiday tea parties, a second murder, a devastating fire, and a terrifying car crash – all while maintaining a sizzling romance with the town doctor. Eggs on Ice offers laugh out loud humor, cozy moments, and recipes that include Slow Cooker Sweet and Sour Pork, Elvis French Toast, Pumpkin Breakfast Casserole, and Church Basement Funeral Bars.

Take some time for yourself during these holidays and cozy up with a nice cup of tea and a fun mystery!

Laura Childs is the New York Times bestselling author of the Tea Shop Mysteries, Scrapbook Mysteries, and Cackleberry Club Mysteries. In her previous life she was CEO/Creative Director of her own marketing firm and authored several screenplays. She is married to a professor of Chinese art history, loves to travel, rides horses, enjoys fundraising for various non-profits, and has two Chinese Shar-Pei dogs.

Laura specializes in cozy mysteries that have the pace of a thriller (a thrillzy!) Her three series are:

The Tea Shop Mysteries – set in the historic district of Charleston and featuring Theodosia Browning, owner of the Indigo Tea Shop. Theodosia is a savvy entrepreneur, and pet mom to service dog Earl Grey. She’s also an intelligent, focused amateur sleuth who doesn’t rely on coincidences or inept police work to solve crimes. This charming series is highly atmospheric and rife with the history and mystery that is Charleston.

The Scrapbooking Mysteries – a slightly edgier series that take place in New Orleans. The main character, Carmela, owns Memory Mine scrapbooking shop in the French Quarter and is forever getting into trouble with her friend, Ava, who owns the Juju Voodoo shop. New Orleans’ spooky above-ground cemeteries, jazz clubs, bayous, and Mardi Gras madness make their presence known here!

The Cackleberry Club Mysteries – set in Kindred, a fictional town in the Midwest. In a rehabbed Spur station, Suzanne, Toni, and Petra, three semi-desperate, forty-plus women have launched the Cackleberry Club. Eggs are the morning specialty here and this cozy cafe even offers a book nook and yarn shop. Business is good but murder could lead to the cafe’s undoing! This series offers recipes, knitting, cake decorating, and a dash of spirituality.