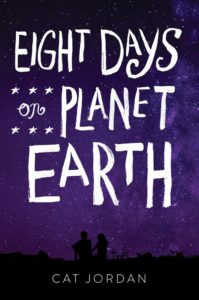 How long does it take to travel twenty light years to Earth?

How long does it take to fall in love?

To the universe, eight days is a mere blip, but to Matty Jones, it may be just enough time to change his life.

On the hot summer day Matty’s dad leaves for good, a strange girl suddenly appears in the empty field next to the Jones farm—the very field in rural Pennsylvania where a spaceship supposedly landed fifty years ago. She is uniquely beautiful, sweet, and smart, and she tells Matty she’s waiting for her spaceship to pick her up and return her to her home planet. Of course she is.

Matty has heard a million impossible UFO stories for each of his seventeen years: the conspiracy theories, the wild rumors, the crazy belief in life beyond the stars. When he was a kid, he and his dad searched the skies and studied the constellations. But all of that is behind him. Dad’s gone—but now there’s Priya. She must be crazy…right?

As Matty unravels the mystery of the girl in the field, he realizes there is far more to her than he first imagined. And if he can learn to believe in what he can’t see: the universe, aliens…love…then maybe the impossible is possible, after all.

If I were Priya…8 Days of Data Collecting

When Matty meets Priya in the field, she tells him she’s a visitor from another planet, here to collect data. Her notebook, he discovers, is filled with her data, from what a dog is to what a railroad crossing looks like.

If I were visiting this planet, I wonder what I might want to collect data on:

Naturally! In Eight Days on Planet Earth, Priya samples mostly pizza because that’s what Matty loves to eat. Plus he’s not really a gourmet! But for me, I think I would want to try lots of kinds of foods, both items that are grown and which represent the earth (vegetables, fruits, legumes) and meals that are created by people because they represent the creativity of the human race. Everything from homemade cheesy casseroles to Michelin-starred entrees and gooey, sugary desserts.

We know that Priya has watched television since she knows about the different incarnations of Star Trek. If I were new to this planet, I would spend at least a full day watching television and going to the movies. It’s impossible to sample all of the kinds of movies and TV series out there so maybe I would just get myself a Netflix subscription so I could check out what was trending in all the different genres of movies and television.

In the movie, Close Encounters of the Third Kind, the scientists use music to communicate with the aliens. The organization SETI (Search for Extra Terrestrial Intelligence) describes Europeans in the 17th Century as conceiving of interpreting language with musical notes in order to contact life beyond our planet. So it’s possible that aliens could know about our music, although it’s probably classical compositions rather than today’s pop. However, I think I would want to know as much as possible about rock music too, and hip hop, jazz, electronica, and so on, in order to fully grasp what moves humans musically.

While Priya doesn’t seem to know much about traditional sports like swimming, she can walk on her hands, which makes me think she knows about gymnastics. I think I would want to learn about popular sports among kids and adults in as many countries as I could. Rugby and cricket and ice fishing in addition to baseball and tennis and volleyball. If I were really lucky, I’d be on this planet during the Olympics so I could sample a variety of sports.

Currently there are nearly 7000 languages in the world; I have to believe there is at least one that would resonate with alien life. Of course finding the one that would be most like my own could take a really long time. Still I think it would be worth it in order to find the connection between our species.

Much to Matty’s surprise, Priya asks if Ginger, Matty’s Labrador retriever, is a dog. So it’s clear that she doesn’t have canines on her planet. I personally can’t imagine a planet without dogs! A life without puppies sounds horrible to me! That being said, there must be thousands of species I don’t know about on earth. It’s not just the obvious ones like cats and mice and elephants and giraffes. There are species of fish that most people have never seen other than in photographs yet they have been on this planet for eons. Learning about them and bringing knowledge of them back to my planet could be critical to understanding how earth functions as an ecosystem.

I imagine that creative expression on other planets might be radically different from what we have here on earth. Perhaps there is no art? While writers and dancers and painters might argue that art is a necessary component to humanity, that we all need to express ourselves and to experience the art of others in order to understand each other, there are some people who think it’s a luxury. Since art can be found in all walks of life, all cultures and among all demographics, I think if I were an alien and maybe unused to creative expression, I would want to know how humans view their world in abstract or non-linear forms. That could be movement or sound or the written word; it could be painting or sculpture, formally presented in a museum or street art like Banksy. I would probably start in Italy at the Uffizi. Just because it’s Italy and I would like to believe aliens would appreciate Italy.

Priya tells Matty that on her planet, families don’t exist the same way they do on earth. I think it’s important to note that families are different from one culture to the next all over this planet. Not everyone lives in the same nuclear family situation that Americans might be familiar with. Then there are the relationships between friends, extended families, co-workers, and so on. Similarly love relationships vary as well: dating, marriage, parenting – all have different parameters. And, um, yeah, kissing would definitely be on my list of experiences to collect data on. 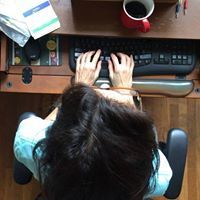 When I was a teenager, the very first book I ever tried to write was pretentious and stilted and set in a future where there was no paper. Obviously, I fancied myself another Ray Bradbury (who I was thrilled to meet not once but twice!). The book had an awesome title and no plot but I had the most fun creating the characters and the world they lived in. That to me is the most enjoyable part of writing a novel: envisioning a world and populating it with all kinds of people and dogs. Gotta have a dog.

The worlds I create now as an adult are based on my travels from coast to coast in the US, to Europe and Mexico and Canada, and on the people I have met and loved and admired and feared. And dogs.

Currently I live in Los Angeles. With my dog.