Ira Mark Egdall is also the author of the eBook Unsung Heroes of the Universe and a popular science writer for DecodedScience.com. He is a retired aerospace program manager with an undergraduate degree in physics from Northeastern University. Mark now teaches lay courses in modern physics at Lifelong Learning Institutes at Florida International University, the University of Miami, and Nova Southeastern University. He also gives entertaining talks on Einstein and time travel. When not thinking about physics, Mark spends his time playing with his grandchildren and driving his wife of 45 years crazy. 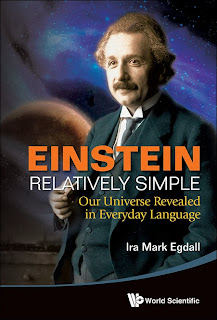 Einstein Relatively Simple brings together for the first time an exceptionally clear explanation of both special and general relativity. It is for people who always wanted to understand Einstein’s ideas but never thought it possible.

Told with humor, enthusiasm, and rare clarity, this entertaining book reveals how a former high school drop-out revolutionized our concepts of space and time. From E=mc2 and everyday time travel to black holes and the big bang, the book takes us all, regardless of any scientific background, on a mindboggling journey through the depths of Einstein’s universe.

Along the way, we track Einstein through the perils and triumphs of his life — follow his thinking, his logic, and his insights — and chronicle the audacity, imagination, and sheer genius of the man recognized as the greatest scientist of the modern era.

In July 1913, Max Planck and Walther Nernst approached Einstein with

a tantalizing offer — a professorship in Berlin, the “world-capital” of phys-

ics, and membership in the prestigious Prussian Academy of Sciences.13,14

At age 34, he would be appointed to Director of the Kaiser Wilhelm

Physical Institute and Professor in the University of Berlin, and become

the youngest member of the Prussian Academy of Sciences — the

“premier scientific society of all Europe.”15 In addition, he would have no

After five months of consideration, Einstein accepted the offer. He

left Zurich Poly the following spring, and moved back with his family to

the country of his birth. On arrival in Berlin, he remarked:

The Germans are gambling on me as they would on a prize-winning hen,

On June 28, 1914, four days before Einstein gave his inaugural

address to the Prussian Academy, a Serbian nationalist assassinated

Archduke Franz Ferdinand, heir to Austria-Hungary’s throne, and his

wife, Sophie, while they were visiting Sarajevo.17 With the pretext he had

on Serbia a month later. World War I, the “War to End All Wars,” had

On July 31, Serbian ally Russia mobilized its armed forces. The next

later, she declared war on France, and then on neutral Belgium to flank

France. In response, Britain declared war on Germany. On August 6,

Austria-Hungary declared war on Russia. The continent was soon ablaze

with the bloodiest and most inexplicable war in its history.

scholars, and artists, including Max Planck, signed a manifesto which

declared support for the Kaiser and the war effort.18 Albert Einstein re-

fused to sign. Two months later, he put his signature on a counter-manifesto

Europe in her insanity has started something unbelievable. At such times

as this one realizes what a sorry species of animal one belongs to.

To make matters worse, Einstein’s marriage to Mileva Marić was on

the rocks. As his fame grew, her resentment over the time he spent outside

the home and on his physics grew accordingly.

In the spring of 1912, while a professor in Prague, Einstein had recon-

nected with his cousin Elsa Löwenthal, a divorcée with two grown daughters

who lived in Berlin.20Unhappy at home, he began a romantic correspondence.

his sons off at the station, Albert “bawled like a little boy.”21He wrote to

Elsa; “They used to shout with joy when I came … Now they will be gone

Einstein’s mother Pauline was delighted with the news. She had always

disliked Marić intensely. “Oh, if your poor Papa had only lived to see it!”

she told her son.

In the bitter summer of 1915, Albert Einstein found himself at the lowest

point of his adult life. Not since his parents had left him in the hated Munich

gymnasium and moved to Italy had he felt such despair. With the continent

and much of the world raging with war, his health deteriorating due to lack

of food, his children virtually unreachable in Zurich, and his new theory of

gravity at a dead end, his only solace was the growing attentions of Elsa.

But for Einstein it was literally the dark before the dawn . . .

No Responses to “Einstein Relatively Simple: Our Universe Revealed by Ira Mark Egdall”