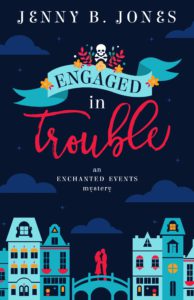 Engaged in Trouble by Jenny B. Jones
An Enchanted Events Mystery Book 1

When a washed-up pop star inherits a wedding planning business, it’s all bouquets and bliss until a bride turns up dead.

Paisley Sutton shot to stardom as a teenage rock sensation, but ten years later that star has fizzled out, just like her bank account. When she unexpectedly inherits her aunt’s wedding planning business, Paisley leaves the glamour of Los Angeles for a charming small town in Arkansas. Thinking she’ll arrive in Sugar Creek and liquidate the moldly property, Paisley’s shocked to find Enchanted Events has experienced a major makeover and is now the place for brides. She’s got two months to keep Enchanted Events afloat if she wants to sell and rekindle her music career with the profits.

Paisley’s tossed into a world of vows and venues, but her most difficult challenge comes in the form of one demanding bride. When this Bridezilla’s found facedown in her cake, all fingers point to Paisley as the prime murder suspect. And she does not look good in prison orange.

This former pop princess will need the help of her gun-toting, ex-CIA grandmother and her handsome neighbor, Beau Hudson, to unravel the mystery and clear her good name. As she and her unruly posse dig into Bridezilla’s life, she discovers the woman had a long list of enemies. The closer Paisley gets to the truth, the more her own life is in danger.

Love is in the air this wedding season, but before Paisley can help the ladies of Sugar Creek say, “I do,” she’s got to unveil a killer. Or find herself the next target.

Engaged in Trouble is the first book in the long-awaited Enchanted Events cozy mystery series by award-winning author Jenny B. Jones. If you like laugh-out-loud adventures, small-town romance, unforgettable, sassy characters, and a mystery to keep you guessing, then you’ll love this new page-turning series.

Q and A with Sylvie Sutton

Hi, I’m Sylvie Sutton, grandmother to Paisley, my granddaughter who has found herself in quite the pickle now that she’s a murder suspect. I’m former CIA, so I’m no stranger to people keeling over, but in her life? Not so much. I’m along for the ride to help her, though—whether she wants my assistance or not.

1. Age?
Young enough to still kick some tail, but old enough to impart lots of not-so-requested wisdom to my granddaughter. I mean, I am full of it. If you’re wondering about my flawless face with few wrinkles, let’s just say I take the Dolly Parton approach to skin care. A lifetime in the CIA can age a girl, so I deserve it!

2. Best memory?
Lots of those are classified. I could tell you about a Christmas in Russia, but the last person I mentioned it to disappeared for a good decade. I could tell you about my vacation in Paris, but that was really just a cover to shut down a drug cartel. These are the sorts of sweet, sweet stories I’d tell my granddaughter when I’d tuck her in at night. Some grannies have fairy tales. I have stories of detonating bombs and stuffing UZIs down my bra. Tomato, tomah-toh.

3. Favorite food?
I can’t taste anything anymore. I’ve had to drink the occasional poison cocktail in my line of work. Between that and my ex-husband’s cooking, my taste buds gave up years ago.

4. Favorite moment with Paisley?
Oh, so many! I love that she’s moved back to Sugar Creek and we’re getting to spend time together. Let’s take a peek at Engaged in Trouble and see one of my faves, shall we? My Paisley can spin a pretty good yarn…

I startled at yet another knock at the door. “Now what?”

Flinging open the door, I found my grandmother and her partner in crime standing beneath the glow of the porch light.

“Hello!” Sylvie and Frannie stood there like a geriatric Lucy and Ethel. “We’re here to console you, dear,” Sylvie said, shoving her way inside. “Frannie brought pie.”
I was never getting that hot bath. But I also wasn’t going to turn away Frannie’s coconut cream.

“Sylvie, good to see you.” `As Beau hugged my grandmother, she gave me a sly wink.

He then bestowed Frannie with a hug, a kiss, and a hair compliment. Hearts and love birds danced around the ladies’ heads.

Frannie sat down on the couch, her kitty cat socks peeping out from her brown Birkenstocks. While my grandmother was still fashionable and fighting age with every weapon in her arsenal, Frannie had taken to dressing like she’d selected her outfits at a thrift store while blindfolded.

“Did we interrupt anything?” Frannie asked.

“Yeah.” Sylvie plopped down beside her. “Like something hot and tawdry?”

“Nothing going on here,” I said.

Frannie gave us the side-eye. “What a waste.”

Beau threw his arm around me and gave my shoulder a squeeze. “Paisley was just telling me how she’s going to leave Sasha’s murder investigation to the professionals.”

“And that’s why we’re here.” Sylvie reached into her purse and withdrew her iPad. “It doesn’t get more professional than us.”

“I don’t even want to know.” Beau gave my shoulder a squeeze before releasing me. “I’m just gonna check a few things upstairs.”

“Stay out of my underwear drawer,” I called.

“Woo, isn’t he a little cupcake with sprinkles?” Frannie fanned herself.

“You two are supposed to be finding a hobby,” I said, watching Beau walk away.

Frannie nodded. “The things you learn about yourself.”

“And last week it was throwing pottery,” I said.

“Apparently you don’t literally throw it,” Frannie said. “We thought it was a new form of target practice.”

“Yeah,” Sylvie said. “FYI—glocks are not welcome at this meeting.”

“So once again we have nothing to do,” my grandmother said. “We can devote all of our attention to clearing your good name. Well, your mostly good name. It’s a tiny bit tarnished thanks to your years of wearing bootie shorts. And that rat fink ex-fiancé Evan. But we know the real you. And the real you does not murder people.”

“At least not in that tacky, cliché way.” Frannie’s lip curled like she was smelling an amateur. “Girl. Tell me you’d have more ingenuity than that.”

I couldn’t even find the words to respond.

“So Sasha’s memorial has been set for Wedneday.” Sylvie typed onto her tablet. “The three of us ladies will attend and work the crowd, if you know what I mean. See what we can learn and observe.”

“It’s like she’s not even related to you.” Frannie said to Sylvie. “Where’s your imagination? Between the two of us, we have enough wigs, costumes, and stage makeup to serve a drag queen convention. You’ll go incognito.”

That sounded like a terrible idea. So naturally I was in. “A simple hat will be enough.”

“We could bug their phones.”

“We could install hidden cameras.”

“Also not going to happen.”

I had a flashback to both of these women plying me with cookies the night after my high school prom. “Wait a minute. Just how far back does that practice go?”

“Not important.” Sylvie stood with a wide grin. “This case is exactly what I need. I feel invigorated already.”

“Could be those burritos we just had at the Taco Hut.” Frannie rubbed her stomach. “I know they’re invigorating something in me.”

“Toodle-loo, shug.” Sylvie pressed a kiss to my cheek. “It’s going to be okay.”

Frannie gave me a parting pat on the bum. “We’ll make sure of it.”

I was still standing at the door a few minutes later when Beau reappeared.

“Are Boris and Natasha gone?”

I almost had the energy to smile. “They mean well.”

“Your grandmother’s right, you know.”

“No.” Beau stepped onto the porch as the crickets serenaded. “That everything’s going to be okay.”

“Get some sleep, Paisley. Tomorrow will be a better day.”

It would. A brand new day to take my life back. Clear my name.

And find a murderer. 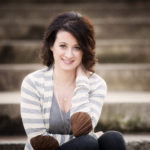 Award-winning, best-selling author Jenny B. Jones writes romance, cozies, and YA with sass and Southern charm. Since she has very little free time, Jenny believes in spending her spare hours in meaningful, intellectual pursuits, such as eating ice cream, watching puppy videos, and reading celebrity gossip. She lives in the beautiful state of Arkansas and has worked in public education for half of forever. She loves bluegrass, a good laugh, and strong tea. She adores hearing from readers.