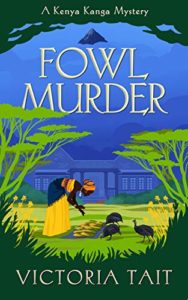 A shooting on the savannah. A tragedy she’d rather forget. When past and present collide, will she survive to see her future?
Kenya, 2016. Semi-retired vet Rose Hardie just wants to enjoy her golden years and care for her disabled husband. But her peace of mind shatters when

a forgotten confidant returns and reopens a case where Rose pulled the trigger. With her memories of the poacher’s shocking death flooding back, she barely catches her breath before her childhood friend is brutally murdered.

Braving blackmail and entrenched corruption, the tireless woman dives headfirst into helping the victim’s son solve the crime. But when the lead suspect is killed, Rose’s plans for a peaceful life end up dead and buried…

As her own traumatic history unravels, can Rose catch a killer before she becomes the next victim?

Hello! I understand you would like to know more about my friend, Aisha Onyango. She kept her maiden name, even when she married that good-for-nothing Reggie. We first met at a school in Nairobi, the prestigious Kenya Girls School.

My mother died when I was three and I became rather feral. My father owned a farm near Molo in western Kenya. My brother Matt and I were brought up by our Ayah (Nanny) Mary, although Matt was away at boarding school most of the time. I began my education at the local school. It was within walking distance and in the evenings and at weekends I ran around with my friends, a few white children whose parents also owned farms, but mostly local African kids. Up to the age of ten, I knew far more about hunting, fishing and riding then I did about maths or history. I could also speak fluent Kiswahili and Kipsingis, my Ayah’s native tongue, but no French and I had never heard of Latin.

My father finally bowed to the pressure of local wives and sent me to boarding school in Nairobi. I was a complete catfish out of water, able to survive on the edge of the pool and slide my way back in, but I never felt part of the school. I had learnt to fight at my local school so whilst I initially got into trouble when I gave Mandy Preston a black eye, the other girls generally left me alone.

That was how I met Aisha. Mandy Preston had tipped the contents of Aisha’s brand new school bag all over the dusty yard at the back of the main school building. Her friends were kicking or stamping on the contents and calling Aisha names. They soon stopped when I connected with Mandy’s face. I’ve never have been able to accept bullying and picking on those weaker than ourselves.

Aisha was only six years old when she started Kenya Girls School. I was four years older but our friendship developed as we were the two school outcasts. Aisha because she was the first African girl at the school, and I because I was an up-country bumpkin who knew little about clothes or the latest music. I’m still not bothered about clothes, but it was the beginning of the 1960s so I soon began to enjoy music.

I was strong and fit from years on the farm and time in the bush with my friends, so I excelled on the sports field. Aisha was quiet and studious, but she had a sharp tongue that cut the hide from a cow. I don’t think I would have passed any exams if Aisha hadn’t explained my lessons and made me sit down and revise rather than run around the playing fields.

In 1964, when I was thirteen, my father was forced to sell the farm and I lost my home and my friends. He bought a small plot on the edge of Nakuru and went to work as farm manager near Eldoret. Even Aisha couldn’t prevent my decline and I was forced to leave school at sixteen. The next year, 1969, Aisha was sent to boarding school in the UK where she continued to excel.

Aisha progressed to the School of Oriental and African Studies at the University of London to study law. She also gained her first civil rights experience helping with pro-bono cases. She would write often. She loved London which had become a truly cosmopolitan city with the rise of music, feminism and anti-establishment marches and demonstrations.

We met occasionally in the holidays and, when she returned to Kenya to continue her studies in 1976, when she was twenty one, she began to visit more often. I had settled down by then and sorted out my life. I’d met a Scotsman, Craig, and we married. He was given a farm manager’s job at Ol Kilima Ranch so we set up home in Laikipia. It was during one of Aisha’s visits there that the shooting incident occurred.

After that our friendship was never the same. Craig and I struggled on in Laikipia, started a family and then moved to manage a tea plantation in Kericho. I watched Aisha’s career with pride and she was often reported in the newspapers, either defending a human rights case or attempting to bring a case of corruption to court.

She didn’t marry until she was in her thirties as I guess her work was all consuming and she had become a formidable figure. I am not sure what she saw in Reggie. Their marriage lasted ten years and I heard she was the one who walked away, together with her two young children, Pearl and Thabiti.

It was a surprise to learn she was living back in Nanyuki and although we had a brief chat on her veranda, we didn’t get a chance to really catch up. I guess there were too many unresolved issues between us… too much guilt. 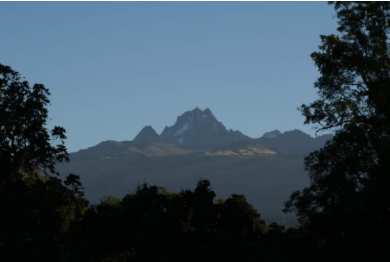 Thank you for hosting me. Here is my morning view of Mount Kenya. 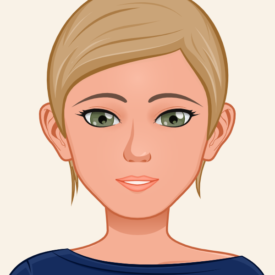