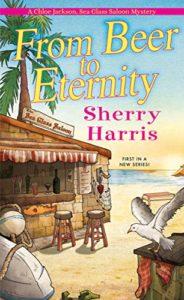 A whip-smart librarian’s fresh start comes with a tart twist in this perfect cocktail of murder and mystery—with a romance chaser.

With Chicago winters in the rearview mirror, Chloe Jackson is making good on a promise: help her late friend’s grandmother run the Sea Glass Saloon in the Florida Panhandle. To Chloe’s surprise, feisty Vivi Slidell isn’t the frail retiree Chloe expects. Nor is Emerald Cove. It’s less a sleepy fishing village than a panhandle hotspot overrun with land developers and tourists. But it’s a Sea Glass regular who’s mysteriously crossed the cranky Vivi. When their bitter argument comes to a head and he’s found dead behind the bar, guess who’s the number one suspect?

In trying to clear Vivi’s name, Chloe discovers the old woman isn’t the only one in Emerald Cove with secrets. Under the laidback attitude, sparkling white beaches, and small town ways something terrible is brewing. And the sure way a killer can keep those secrets bottled up is to finish off one murder with a double shot: aimed at Chloe and Vivi.

Never live by a motto is going to be my new motto. Ugh, no. No more mottos. My dad always says a promise made is a promise kept which is why I’m now living in the panhandle of Florida in a town called Emerald Cove. I’m Chicago born and breed, but I’m taking a leave of absence from my job as a children’s librarian to help a friend’s grandmother run her bar.

Let me tell you, Vivi Slidell is not the grandmother I was expecting. I thought I’d swoop in to the Sea Glass saloon and save some feeble, old woman. But Vivi has a gym toned body I envy and an endless supply of wedge-heeled sandals I couldn’t work in for an hour, let alone all day. She doesn’t want me here, but I promised my friend Boone I’d help her if anything happened to him. And sadly, the worse did. Talk about complicated.

Things are different down here. Everyone says “y’all” and “yes, ma’am or no, sir.” The pace of life is definitely slower, but that’s not all bad, right? The beaches are stunning—long stretches of white sand, with emerald-colored water gently swooshing in and out. The sand is so white that it looks like Mr. Clean comes by every night to tidy up.

Those aren’t the only differences though. We have a patron who comes in wearing an armadillo shell on this head instead of a hat. It seems odd to me, but doesn’t bother bartender Joaquin Diaz—my only friend here. Once he finds out I’ve been lying to him, we might not be friends for long.

I’m tough so I can handled all these changes. Well, at least that’s what I thought until I found our armadillo-shell wearing patron dead by the dumpster behind the Sea Glass. I screamed like the girl I am. When Vivi turns out to be the number one suspect, my life turns upside down. I’m staying until I can clear her name whether she wants me to or not!

In her spare time, Sherry loves reading and is a patent-holding inventor. Sherry, her husband, and guard dog Lily are living in northern Virginia until they figure out where they want to move to next.