Thank you for sharing!
To post this Grand Finale and add your Social Media to the Rafflecopter,
email us at PrismBookTours(at)gmail.com with “Geography GF” in the subject line. 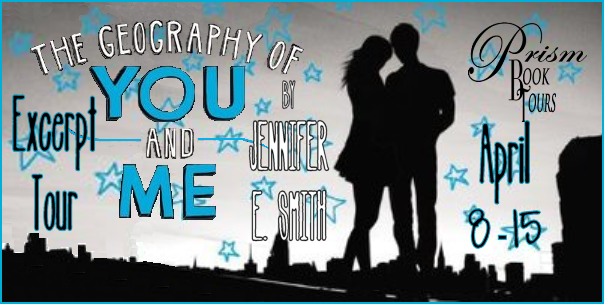 The Geography of You and Me
by Jennifer E. Smith

The Geography of You and Me
by Jennifer E. Smith
YA Contemporary Romance
April 15th 2014 by Little, Brown for Young Readers

Lucy and Owen meet somewhere between the tenth and eleventh floors of a New York City apartment building, on an elevator rendered useless by a citywide blackout. After they’re rescued, they spend a single night together, wandering the darkened streets and marveling at the rare appearance of stars above Manhattan. But once the power is restored, so is reality. Lucy soon moves to Edinburgh with her parents, while Owen heads out west with his father.

Lucy and Owen’s relationship plays out across the globe as they stay in touch through postcards, occasional e-mails, and — finally — a reunion in the city where they first met.

A carefully charted map of a long-distance relationship, Jennifer E. Smith’s new novel shows that the center of the world isn’t necessarily a place. It can be a person, too.

Amazon *  Barnes & Noble * Book Depository
Did you miss any of the excerpts we shared on our tour?
You can go back and read chapter one in its entirety, but here are some snippets:
Tour Launch
The two main characters, Lucy and Owen, from The Geography of You and Me first meet in New York, but then keep in contact from different places around the world before meeting up in New York again.

The author, Jennifer E. Smith, shared some of her favorite places in the world in preparation of Geography’s release. We’d like to re-share them with you!

A Backwards Story – Chapter One, Part 1
On the first day of September, the world went dark.
But from where she stood in the blackness, her back pressed against the brassy wall of an elevator, Lucy Patterson had no way of knowing the scope of it yet.
Literary Meanderings – Chapter One, Part 2

When the elevator had wrenched to a stop, their eyes met, and in spite of the situation, she’d found herself wondering—ridiculously—whether he recognized her, too. But then the lights above them had snapped off, and they were both left blinking into the darkness, the floor still quivering beneath them. There were a few metallic sounds from above—two loud clanks followed by a sharp bang—and then something seemed to settle, and except for the faint beat of his music, it was silent.

The boy turned to face her, and though it was still too dark for details, she could see him more clearly with each minute that passed. She was reminded of a science experiment her class did in fifth grade, where the teacher dropped a mint into each of the students’ cupped palms, then switched off the lights and told them to bite down hard, and a series of tiny sparks lit up the room. This was how he seemed to her now: his teeth flashing when he spoke, the whites of his eyes bright against the blackness.

A Life Bound By Books – Chapter One, Part 4

“I think we’ll be fine,” he said, his voice reassuring; then, with a hint of amusement, he added: “Unless, of course, you’re afraid of the dark.”

“I’m okay,” she said, sliding down the wall until she was sitting on the floor, her elbows resting on her knees. She attempted a smile, which emerged a little wobbly. “I’ve heard monsters prefer closets to elevators.”

The Reading Diaries – Chapter One, Part 5

This time she laughed. “What’s up there, anyway?”

“You’ve got keys to the sky?” she said, and he knitted his fingers together, lifting his arms above his head in a stretch.

“It’s how I impress all the girls I meet in the elevator.”

“Probably not the same place as you.”

The Wonderings of One Person – Chapter One, Part 7

He considered this a moment. “Yup,” he said finally. “That pretty much sums up my feelings about New York.”

Lucy nodded. “You would prefer not to,” she said. “But that’s just because it’s new. Once you get to know it more, I have a feeling you’ll like it here.”

“Is this the part where you insist on taking me on a tour of the city, and we laugh and point at all the famous sights, and then I buy an I ♥ NY T-shirt and live happily ever after?”

“The T-shirt is optional,” she told him.

His eyes caught hers through the darkness, and the elevator felt suddenly smaller than it had just minutes before. Lucy thought of all the other times she’d been crammed in here over the years: with women in fur coats and men in expensive suits; with little white dogs on pink leashes and doormen wheeling heavy boxes on luggage carts. She’d once spilled an entire container of orange juice on the carpet right where Owen was sitting, which had made the whole place stink for days, and another time, when she was little, she’d drawn her name in green marker on the wall, much to her mother’s dismay.

Across the elevator, Owen rested his head against the wall. “It is what it is…” he murmured, letting the words trail off at the end.

“I hate that expression,” Lucy said, a bit more forcefully than intended. “Nothing is what it is. Things are always changing. They can always get better.”

“It won’t help anything,” she said. “Worrying.”

Lucy gave him a long look. “I have no idea what you’re saying.”

“Or maybe you’d just prefer not to,” he said, sitting forward, and they both laughed. The darkness between them felt suddenly thin, flimsy as tissue paper and even less substantial. His eyes shone through the blackness as the silence stretched between them, and when he finally broke it, his voice was choked.

You’ll have to find out what happens between Lucy and Owen by grabbing a copy. 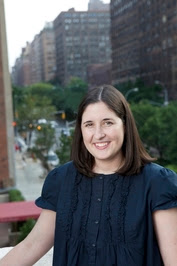 Jennifer E. Smith is the author of This Is What Happy Looks Like, The Statistical Probability of Love at First Sight, The Storm Makers, You Are Here, and The Comeback Season. She earned a master’s degree in creative writing from the University of St. Andrews in Scotland, and currently works as an editor in New York City. Her work has been translated into 27 languages, and her next young adult novel, The Geography of You and Me, will be out in Spring 2014.