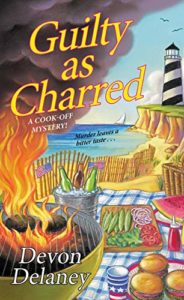 Sherry Oliveri has attained celebrity status after winning the America’s Good Taste Recipe Contest with her delectable New England Crab Cake Sliders. But now that she’s back home in Connecticut, she’s got to deal with something else fishy . . .

Sherry’s making a guest appearance on a local radio show when the news comes in: Poppy Robinson has been found dead in the town’s community garden. Sherry was supposed to be taking questions about her win in the national cooking competition, but instead the callers start dishing dirt.

Poppy and Sherry were both involved in the vegetable garden, and while Poppy may have been a bit priggish, it wasn’t anything that called for a shovel to the back of the head. There was already trouble brewing, with the owner of the land threatening to renege on their agreement, and this murder has taken tensions to a new level. Now while Sherry’s organizing a Fourth of July cook-off event, she’s also got a murder investigation on her plate . . .

Heat 1 tablespoon oil in a large skillet over medium heat. Add shrimp and cook until pink.

Add apricot preserves, oregano, and 1⁄4 teaspoon salt to the skillet and toss to coat shrimp. Remove shrimp to a plate.

Remove artichoke hummus to a bowl and stir in dill. Set aside.

Line a 9×13-inch baking dish with pita quarters and bake until crispy. Spread chips across a small serving platter.

Spoon dollops of hummus over the chips and top with shrimp and tomato blend. 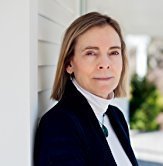 Devon Delaney is a wife, mother of three, accomplished cooking contester, recent empty nester, and lifelong resident of the Northeast. She has been handsomely rewarded for her recipe innovation over the last twenty-plus years, including a full kitchen of major appliances, top cash prizes, and four trips to Disney World. She has also won the Grand Prize in a national writing contest for her “foodie” poem “Ode to Pork Passion.”