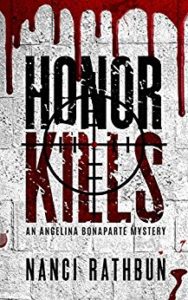 A missing husband. A suspicious obituary. She’s not the only one hunting down a dead man’s footsteps.

As a divorcee, Angelina Bonaparte knows firsthand the lengths some men will go to escape responsibility. When a worried mother wants the private investigator to track down her missing husband, she’s eager to bring the deadbeat dad to justice. But even after she discovers the man’s obituary, she refuses to believe it until she sees the body. Tracking down the nurse who last saw him alive could be the missing puzzle piece to her client’s broken family.

But as she digs deeper, she realizes there’s something darker at play than dodging child support payments. And she may not be the only one hunting the man down. To close the case and reunite her client’s family, she must track down the missing husband without falling prey to the same ruthless hunter.

PI Angelina Bonaparte and local attorney Frank Jamieson, who drafted the obituary for Henry Wagner, the only “locate” whom Angie was unable to find–until the obit is published. They visit the shelter where Hank Wagner once lived under the name Jim Beltran.

“Do you think we could look over the car, Doris?” I asked.

She sighed as she took a key from her key ring. “Thorough, ain’t ya?”

I laughed. “Some people call me pita.” She quirked a brow. “Pain In The Ass,” I responded to her unasked question.

That got a deep belly laugh from her. “I got that,” she said. “Car’s in the back lot. You’ll know it right away. It has more rust than metal. I’ll be in the kitchen when you’re done.”

Frank and I went out the back door and down a set of wide wooden stairs to the Honda. It was indeed past its prime. I could see flashes of silver body, but not many. Frank wanted to help me, but I told him, “I’m used to looking for things that are out of place.” I ducked into the front bench seat and examined the dash, the glove box and the floor. Nothing. With great distaste, I insinuated my hands into the juncture of seat back and bottom, longing for latex gloves. As expected, my nails came out gunky. A long soak in antiseptic would be needed ASAP. After repeating the process in the back seat and climbing into the trunk, I said to Frank, “We’re barking up the wrong tree.”

“I think you’re right, Angie. Surely if Hank wanted something to be found, he’d make it easier.”

As Frank started to lock the car, Doris exited the back door and came toward us, holding a plastic zip-lock baggie. “I almost forgot,” she said. “Jim left this, too.” She handed it to Frank.

“Fuses,” Doris said. “Jim told me we’d need them, because they were always blowing. Funny, though, we ain’t had to use them.” She shrugged. “But I wanted ya to see them. I wanted to be sure nobody’d come back at me for not telling everything that Jim left.”

“It’s good to be careful, Doris,” Frank said, “but please don’t worry that we’d think you were hiding something.” He put a hand on her big shoulder. “You’re as honest as they come. I know that.”

She sniffed. “Should hope so.” Then she whacked Frank on the back. He lurched forward a bit, but managed to steady himself.

“We’re almost done here, Doris. We just want to take a look under the hood.”

Frank unlocked the car and I climbed into the front seat and popped the hood. He leaned into the open door. “The fuse box is under the dash. You check it out while I pretend to look at the engine.

I located the box and wrestled the cover off. Inside the box, wedged between two rows of fuses, was a piece of stiff paper. I eased it out, replaced the cover and exited the car. Once under the hood with Frank, out of sight of the kitchen windows, I examined the paper. It was long and narrow, thick like manila paper and perforated on one end. It reminded me of the tabs I used to slide into hanging file folders in the days before adhesive printer labels. Carefully printed in block letters was the sequence $x9Y#nOS7PybNCRekUW@S-Mail.com.

At last, a clue! “Marcy gave me his Gmail account when he first disappeared. It’s still open, but it gets nothing except spam,” I told Frank. “I’ve never heard of S-Mail, and there’s no password. And what a strange login!”

Frank peered over my shoulder. “Very strange. Let’s head back to my office and see if we can figure it out.”

I tucked the paper into my pants pocket as Frank released the rod holding the hood open. It fell with a clang. “Careful,” I told Frank. “It might disintegrate.” 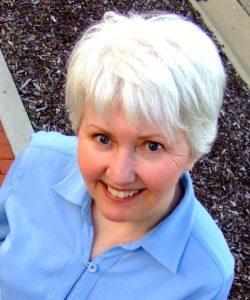 Nanci Rathbun is a lifelong reader of mysteries – historical, contemporary, futuristic, paranormal, hard-boiled, cozy … you can find them all on her bookshelves. She brings logic and planning to her writing from a background as an IT project manager, and attention to characters and dialog from her second career as a Congregationalist minister.

Nanci grew up an Army brat, living in Germany, France, and Korea, as well as several states in the U.S. After her dad retired from the service, the family settled in Milwaukee, Wisconsin. There, Nanci raised her daughter and son, while working at AT&T. She never expected to move, but when her second grandchild was on the way, she wanted to be closer. One of her greatest joys is hearing her three granddaughters shout ‘Nana’ when she comes in their front door in Fort Collins, Colorado.

Nanci’s Maltipoo, Teeny, and she now live in Wellington, Colorado. No matter where she makes her home, she will always be a Packers fan.