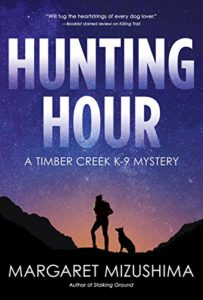 Deputy Mattie Cobb is in a dark place and has withdrawn from Cole Walker and his family to work on issues from her past. When she and her K-9 partner Robo get called to track a missing junior high student, they find the girl dead on Smoker’s Hill behind the high school, and Mattie must head to the Walker home to break the bad news. But that’s only the start of trouble in Timber Creek, because soon another girl goes missing―and this time it’s one of Cole’s daughters.

Knowing that each hour a child remains missing lessens the probability of finding her alive, Mattie and Robo lead the hunt while Cole and community volunteers join in to search everywhere. To no avail. It seems that someone has snatched all trace of the Walker girl from their midst, including her scent. Grasping at straws, Mattie and Robo follow a phoned-in tip into the dense forest, where they hope to find a trace of the girl’s scent and to rescue her alive. But when Robo does catch her scent, it leads them to information that challenges everything they thought they knew about the case.

Mattie and Robo must rush to hunt down the kidnapper before they’re too late in Hunting Hour, the third installment in critically acclaimed author Margaret Mizushima’s exhilarating mystery series.

Whenever I give an author talk at libraries or book clubs, the question always arises—where do you get your story ideas? The general answer is everywhere, but I know that readers want something more specific, so I usually go into detail about how I discovered the premise for the Timber Creek K-9 mysteries, the first plot, and how characters Mattie Cobb, Robo, and Cole Walker came to life.

I’ll address character development first because to me, the characters are the most important. They drive the story.

I’ve been married to a veterinarian for a long, long time (thirty-five years), and though I worked days at my own career as a speech therapist, I’ve assisted him countless times with emergencies after hours, surgeries, and weekend duties. I’ve noticed that whenever we arrive at a stable or property, people gather around to watch him work. (My husband jokes that if he had a nickel for everyone who wanted to watch him, he’d be a rich man.) This led me to believe that readers would also want to “watch” a vet work, and I decided I needed to include a vet in my next book. I’d already decided I wanted to write a mystery, so I began to plan how this vet would fit in.

I needed to decide if my vet would be an amateur sleuth or if there would be a police officer involved in the story. A couple things occurred serendipitously at that point. My husband told me that one of his clients who trained police and protection dogs was willing to talk to me about his work, and I met a retired K-9 handler and trainer from Bellingham, Washington, a woman who later became a friend. These two people gave me the resources to study and write about a K-9 officer, and I decided to write a police procedural featuring a K-9 team. It took only a few leaps between synapses to arrive at the conclusion that my officer should be a woman—since female handlers are less common—my veterinarian a man, and that there should be a love interest between the two.

I’ll spare you the details of how I developed the backgrounds for these characters. Suffice it to say that I spent hours and hours brainstorming and planning. My setting—a fictional, small town in the Colorado high country—flowed naturally from my past, since I grew up on a cattle ranch near this type of town, so developing that part was easy. But then I needed to get started on the plot.

My husband’s client came into the clinic one day needing a health exam and certificate on a dog that he was transferring to the state forest service. The forest ranger accompanied our client and told my husband about how they were starting narcotics detection K-9 units to combat drug traffic through the Colorado state and national forests.

Boom! We discovered the premise for my K-9 team. Having grown up in a rural community, I was aware that these county sheriff departments don’t always have the financial resources of their urban counterparts, so I decided that local merchants and ranchers would band together to purchase Timber Creek County’s first narcotics detection dog.

And that led to the development of Robo, who often becomes the star of the show. By this time, I’d been able to observe our client train dogs and work with groups of K-9 officers, and I’d noticed behaviors and mannerisms of various police dog breeds—the responsiveness of the German shepherd and the eager enthusiasm of the Belgium Malinois (pronounced mal-in-wah). When I had the opportunity to shadow my new friend from Washington as she trained dogs for AKC tracking, she told me countless stories about the prowess of her late partner Robo, a German shepherd originally trained in narcotics detection and patrol that she’d later trained in evidence and gunpowder detection.

It seemed like her Robo could do it all, which I know is very unusual. I decided to recreate this wonder dog, and I gained her permission to use his name. Now, whenever my Robo needs to learn new skills, this trainer is only a phone call away to help me discover the how-tos. It also helps that I’ve trained dogs for search and rescue before, so I’ve had experience with basic tracking and trailing, as well as training dogs in incremental steps.

I owe my husband a great big hug for helping me so much with story plot lines. We brainstorm together over meals while driving in the car, and even in the middle of the night. I also glean ideas from crime show documentaries on television, other veterinary and police officer friends, and the news. My family and I talk about Mattie, Robo, Cole and his kids like they’re real people. One daughter who works in public health and my sister who’s involved with an active mental health organization search for resources to help Mattie, who came into the series with a great deal of emotional baggage, achieve healing and health.

Characters are often said to “come alive,” and that’s what has happened for us with my series. Each individual book’s plot springs from what’s happening in the lives of the Timber Creek characters, and I strive to center the investigation on Robo’s skillset.

Robo is a working dog, and he is characterized as such. He doesn’t have human characteristics because he’s better than that. Like his trainer once told Mattie: If you never learn to trust this dog, you’ll only be as good as a human cop can be; but if you can learn to trust him, there’s no limit to how good a team you can become.

Please join us for a Timber Creek K-9 mystery adventure. 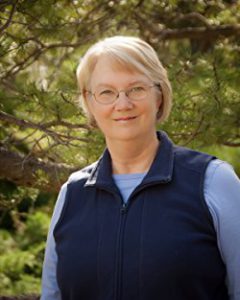 Margaret Mizushima is the author of the Timber Creek K-9 mysteries, which includes Killing Trail (Crooked Lane Books, 2015) nominated for an RT Reviewer’s Choice award for best first mystery, Stalking Ground (Crooked Lane Books, 2016) a finalist in the Colorado Book Awards mystery category, and Hunting Hour (Crooked Lane Books, 2017). She has a background in speech pathology and practiced in an acute care hospital before establishing her own rehabilitation agency. Currently, she balances writing with assisting her husband with their veterinary clinic and Angus cattle herd. She enjoys reading and hiking, and she lives on a small ranch in Colorado where she and her husband raised two daughters and a multitude of animals.