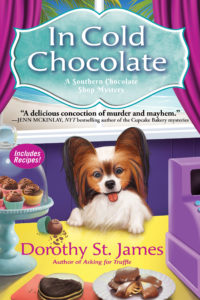 In Dorothy St. James’s third delectable Southern Chocolate Shop mystery, a new batch of chocolate and troubles of the heart cause a string of disasters for the Chocolate Box’s new owner, Charity Penn.

The vintage seaside town of Camellia Beach, South Carolina seems like the perfect place for romance with its quiet beach and its decadent chocolate shop that serves the world’s richest dark chocolates. The Chocolate Box’s owner, Charity Penn, falls even further under the island’s moonlit spell as she joins Althea Bays and the rest of the turtle watch team to witness a new generation of baby sea turtles hatch and make their way into the wide ocean.

Before the babies arrive, gunshots ring out in the night. Cassidy Jones, the local Casanova, is found dead in the sand with his lover Jody Dalton—the same woman who has vowed to destroy the Chocolate Box—holding the gun. It’s an obvious crime of passion, or so everyone believes. But when Jody’s young son pleads with Penn to bring his mother back to him, she can’t say no. She dives headfirst into a chocolate swirl of truth and lies, and must pick through an assortment of likely (and sometimes unsavory) suspects before it’s too late for Penn and for those she loves in Dorothy St. James’s third rich installment of the Southern Chocolate Shop mysteries, In Cold Chocolate. 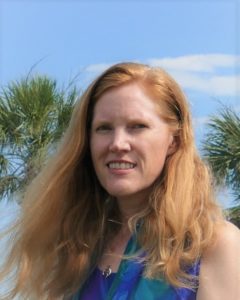 Mystery author Dorothy St. James was raised in South Carolina. She makes her home on the outskirts of Charleston, South Carolina with her husband, a neurotic dog, and a fluffy cat. Though writing has always been a passion for her, she pursued an undergraduate degree in Wildlife Biology and a graduate degree in Public Administration and Urban Planning. She put her educational experience to use, having worked in all branches and all levels of government including local, regional, state, and federal. She even spent time during college working for a non-profit environmental watchdog organization.

Switching from government service and community planning to fiction writing wasn’t as big of a change as some might think. Her government work was all about the stories of the people and the places where they live. As an urban planner, Dorothy loved telling the stories of the people she met. And from that, her desire to tell the tales that were so alive in her heart grew until she could not ignore it any longer. In 2001, she took a leap of faith and pursued her dream of writing fiction full-time.