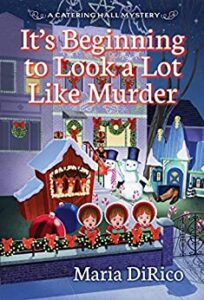 Astoria, Queens, is decorated within an inch of its life for the Christmas season, and Mia Carina is juggling her job at the Belle View catering hall with a case of murder…

Mia’s busy with a full schedule of events at the family business—among them an over-the-top Nativity-themed first birthday party and a Sweet Sixteen for a teen drama queen. But her personal life is even more challenging. Her estranged mother has returned—and her lifelong friend Jamie has discovered a shocking secret about his past. He’s so angry that he starts hanging out with Lorenzo, who claims to be his long-lost brother—even after it becomes clear that Lorenzo’s story is as fake as a plastic Christmas tree.

Then a body turns up among the elves in a Santa’s-workshop lawn display, and amateur sleuth Mia has a buffet of suspects to choose from. Amid the holiday celebrations, she intends to find out who’s the guilty party…

NOTE: the mix of ingredients—minus the pasta—are made ahead of time and marinated from one hour to overnight.

Dice shallot. Add the teaspoon of oil to a skillet or saute pan and saute the shallot until it is soft. Set aside to cool.

In a medium-sized bowl, gently mix the crab, shrimp, garlic, lemon juice, parsley, cooled shallot, and basil. In a smaller bowl, whisk the olive oil, artichoke liquid, and salt together. Pour the liquid into the shellfish mixture and gently stir to combine. Cover the bowl and refrigerator for at least an hour but preferably overnight.

When you’re ready to prepare the dish for dinner, removed the shellfish mixture from the refrigerator and

bring to room temperature. Follow the directions that accompany your cavatelli or choice of pasta to cook it until it’s al dente. Drain the pasta and toss with the shellfish mixture. Serve immediately. You can put out salt, pepper, and lemon juice for any guest who wants to add a dash to their meal, but no cheese. Niente formaggio sul pesce, as the Italians say. No cheese on fish. 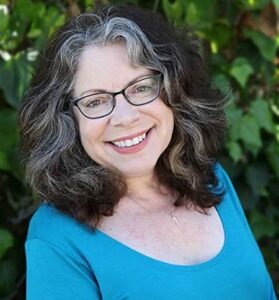 Maria DiRico is the pseudonym for Ellen Byron, author of the award winning, USA Today bestselling Cajun Country Mysteries. Born in Queens, New York, she is first-generation Italian-American on her mother’s side and the granddaughter of a low-level Jewish mobster on her father’s side. She grew up visiting the Astoria Manor and Grand Bay Marina catering halls, which were run by her Italian mother’s family in Queens and have become the inspiration for her Catering Hall Mystery Series. DiRico has been a writer-producer for hit television series like Wings and Just Shoot Me, and her first play, Graceland, appears in the Best Short Plays collection. She’s a freelance journalist, with over 200 articles published in national magazines, and previously worked as a cater-waiter for Martha Stewart, a credit she never tires of sharing. A native New Yorker who attended Tulane University, Ellen lives in Los Angeles with her husband, daughter, and two rescue dogs.