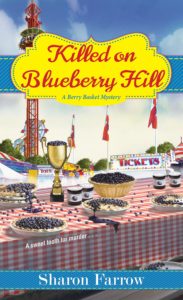 It’s peak tourist season in Oriole Point, Michigan—the blueberry buckle of the fruit belt. Nothing draws the crowds quite like their annual carnival. And nothing turns it sour faster than murder…

The Blueberry Blow Out festival has begun and it’s time for Marlee Jacob, owner of The Berry Basket, to shine. Unfortunately, it’s also bringing out the worst in her fiancé Ryan Zeller. Ryan’s rivalry with Porter Gale, owner of Blueberry Hill Farm, spills over into a very public and very ugly fight. And after they compete in the pie-eating contest and a raucous tug of war, their orchard blood feud takes a deadly turn…

The death of the king of Blueberry Hill is a shock but not too surprising—he was a diabetic whose last pig-out meal was deliciously fatal. But when authorities discover that someone tampered with Porter’s insulin, a tragic accident is looking like murder—and Ryan is the key ingredient. Now Marlee’s investigation to clear his name is taking her deep into the Gale family secrets, and she’s being shadowed every step of the way by a killer whose sweet revenge is just beginning… 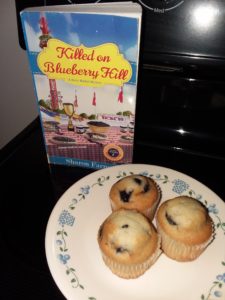 Marlee and the other residents of Oriole Point, Michigan are celebrating the Blueberry Blow Out – a fun festival filled with lots of fun events like a pie-eating contest, tug-of-war, and more. The Berry Basket sponsors a bounce house ride and also has a booth at the festival. Between that as well as the daily tourist traffic at The Berry Basket, Marlee has a lot on her plate. Factor in her wavering feelings about marrying Ryan, witnessing a fight that almost turned deadly between Ryan and a rival blueberry farmer, Porter Gale, and then Porter’s death…Marlee is stressed and with good reason.

This story was full of so many twists and turns. The story played out unlike any other cozy mystery I’ve read. I loved that I didn’t know how it was going to end. Killed on Blueberry Hill is a bit of an edgier cozy – there are a few mild curses, some on-page violence (nothing too gory), and a sophisticated mystery. Though this is the third in a series, you could easily enjoy it without having read the others.