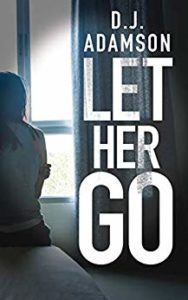 With her ability to present clues without giving away the endings and offering surprising twists encouraging the reader to the next page, D. J. Adamson delves into a family tragedy ending up in murder and a teenage daughter missing. When Lillian Dove finds herself involved in the police investigation, she realizes the daughter holds the key to unravel who killed her mother.

It is three days before Christmas when Lillian Dove comes across Dr. Conrad standing out in front of his house, covered in blood. When going inside the house to help other members of his family, she finds his wife killed, his son seriously injured, and his teenage daughter, Peyton Clayton, missing. Even more shocking, the police suspect Dr. Conrad. Understanding how emotional dilemmas have strained the family emboldens Lillian to help Detective Jacque Leveque, Major Crimes Detective for the Frytown Police Department, find the prime witness to the Conrad truths.

Let Her Go is a nerve-wracking exploration into a family lost, and the extent love elicits both the good and the bad. In this Third Step in Personal Recovery Lillian works to find Peyton Clayton, while battling the worse arctic freeze in Frytown’s history, untangling human frailties, and confronting the ghosts of Christmas.

DONNA STOCKMAN, A MINOR CHARACTER IN A MAJOR WAY

Donna Stockman is a better source than Wikipedia. She is unmarried, other than to her job as first shift Dispatcher for the Frytown Police Department. She runs her world of Frytown by managing her console, sending out officers to situations needing fixed. She has been with the department for over twenty years, considers the male officers “her boys.” When Lillian came into the department, Donna befriended her right away. She pulled Lillian into her nest. But, Donna has also come to admire Lillian. Donna works in the novel as an eye-view of Lillian from an outside character. So what could be more apropos than giving Donna startling glasses and the ability to interrogate Lillian’s motives as well as admiring her ability to jump into life instead of sitting back watching it.

Donna’s eyebrows moved to uneven positions, one lowering below the frames of her retro, rhinestone-studded glasses, and her other eyebrow arching high in a question. As with most mornings, she was sitting in her custom-ordered ergonomic chair positioned facing the doorway keeping her eye on what was going on in the station. (Admit to Mayhem)

The first book Admit to Mayhem connects Lillian to the police station. However in the second book Suppose, Lillian becomes the owner of a liquor store, and she needs an avenue to keep her abreast of the criminal cases she becomes involved in, along with knowing the activities of her nemesis Jacque Leveque, Detective for Major Crimes. In Let Her Go, Donna continues to work as Lillian’s link to the department.

When we got into Dispatch, Donna immediately took a seat in her ergonomic chair. She gave a huge sigh. “This is the first break I’ve had since I got here this morning.” She said, “I saw on the call report we’ve had over six calls on stolen Christmas trees. Not presents, trees! You were the second who reported yours missing. What would someone want with a Christmas tree? I hate putting on those little lights. They get all tangled up. And, six?”

There were three large computers on her desk with a microphone and speaker. The computers gave her the ability to see where patrol cars were located, the ability to schedule and reschedule officers in the field, bring real-time intelligence up immediately on the caller, and capture call logs.

She went on without continuing with the tree caper. She said, “Are you really here about your mom or did you come in to find out why Dr. Conrad was brought in this morning?” Couldn’t put much over on Donna.

“Dahlia, of course,” I fibbed. “I didn’t know Dr. Conrad was brought in. Are you saying he was arrested?”

Her eyebrows moved to uneven positions behind her retro, rhinestone-studded glasses. The lights on her sweater blinked on. “I’m not saying a word.” A sly grin moved across her lips. Of course, she already had. “I heard you were suspected in your mother’s case.”

“Wrongly suspected,” I exclaimed. “I had nothing to do with throwing a dead chicken through her sliding glass window. Where would I get a chicken?”

One eyebrow raised higher than the other. “Uh, huh.” She reached around and grabbed her coffee cup. Took her time taking a sip. Donna was a skilled interrogator. She knew timing was everything.

I raised my right hand. “I swear. I had nothing to do with it.”

She closed an eye, giving me the “Donna-Eye.” 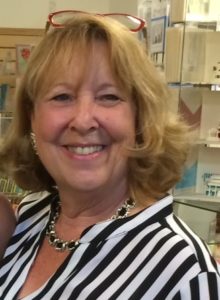 D.J. Adamson is an award-winning author for both her mystery novels and her science fiction novel. She is the editor of Le Coeur de l’Artiste, a newsletter which reviews books, and a blog, L’Artiste with offers authors the venue to write on craft, marketing, and the creative mind. D.J. teaches writing and literature, and to keep busy when she is not writing or teaching, she has been a board member of Sisters in Crime Los Angeles and Sisters in Crime Central Coast, a member of the Southern California Mystery Writers Organization, California Writers Club and Greater Los Angeles Writer’s Society. Her books can be found and purchased in bookstores and on Amazon. To find her, her blog L’Artiste, or newsletter go to http://www.djadamson.com.